MACSrPOO! Destruction Derby 2 is the second entry in the demolition derby/racing series published by Psygnosis.

Eight images of promotional material, used on PlayStation demo discs, can be found on retail versions of the game as RAW files. Cars and assets in these images are evidently early.

Destruction Derby 2 was originally meant to feature a system link mode, much like its predecessor. While it ended up abandoned mid-development, graphics related to it survive among HUD and car textures.

Found among position markers, graphics that read "1up" and "2up" would likely be displayed above the human opponent's car during linked races. Strangely, the 1up graphic is seen replacing one of the torches' flames in Death Bowl – it's unknown whether this is intended as a silly inside joke or simply designer oversight.

Found among car textures in Chalk Canyon, door textures for the second player's car. The palettes for the Rookie, Amateur and Pro cars seem to fit just right.

Low poly texture palettes for the #01 car exist, but go unseen since the low poly model is never used for that car.

Loaded in the VRAM near the palettes used by the player's Amateur and Pro cars are palettes for two unknown cars – one in solid red and another one in black/blue. Present in Pine Hills Raceway, Caprio County Raceway, Ultimate Destruction, Red Pike Arena and Death Bowl. No equivalent low poly or door palettes exist.

Loaded near door palettes in Chalk Canyon is a blue/yellow palette that fits both the #01 and #02 door textures. No equivalent palettes exist for any other parts. 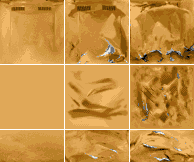 Loaded in all tracks near The Bouncer's various hood, roof and trunk palettes is a yellow color scheme that is never seen during normal gameplay. This tone of yellow closely resembles that of the early car graphics found in Pine Hills Raceway.

Loaded in Pine Hills Raceway are graphics for a car's windshield, rear window and a damaged front wheel arch – none of which see any use whatsoever. They have their own color palettes, which sport a yellow/white scheme only seen in promotional artwork.

Loaded along with the main menu's graphics is the game's cover artwork. This is never seen by the player, as the graphic is overwritten in the VRAM by a picture of the currently selected track when entering the Track Select menu.

On booting and while using the menu, the TTY debug console displays debug information. This is not visible to the user. The nocash BIOS can be used to view these statements. The nocash BIOS automatically detects the DUART hardware, and activates TTY if it is present.