The Genesis Aladdin, based on the movie of the same name, features high-quality animation with help from Disney animators. 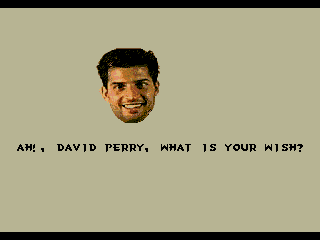 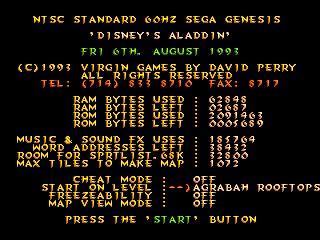 Press A, C, A, C, A, C, A, C, B, B, B, B on te Options screen. Programmer David Perry's face will pop up to greet you, and the debug screen will appear. Aside from the font, this screen is almost identical to the one used in the later Earthworm Jim (and its sequel), which David Perry also worked on.

The jingle used for winning a bonus in the bonus game lasts about 8 seconds, but only the first second of it is heard in-game (slightly more if it's the last roll of that bonus game session). The full version can be heard in the sound test, or if Freezeability is used during the bonus game.