Featuring a typically questionable yet charming low-budget game soundtrack composed of unsigned rock bands, the first FlatOut is considered a noteworthy staple in the racing genre. With a unique roster of stock-car-themed early-70's muscle cars and imports to choose from, players can take their suicidal "ragdoll" on a joyride through multiple under-construction and highly-destructible environments such as racetracks, small towns, and forests, as well as a few demolition derby arenas, and infamously a unique stunt mode where players would watch their driver launch out the windshield to perform large-scale versions of various sports. At the end of the day, you'll find yourself plowing into cardboard boxes and traffic cones on the last lap of a heated race that will comedically catapult your vehicle into outer space.

A copyright screen that was only used in the public demo release is present in the final game's files but is never used. Note the "Rating Pending" symbol.

Vehicle logos were supposed to make an appearance in the vehicle select screen, however, they remain mysteriously unused.

The game has two tracks set in a Winter landscape, but present in data\tracks\winter\textures is map_winter3a/b/c.dds, which looks like a placeholder.

In data\menu\bg winter3.tga is found, possibly a leftover, definitely unused. 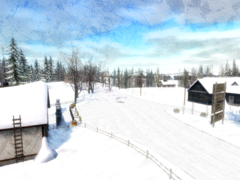 Over time, the player/AI vehicles went through multiple revisions. Early screenshots showcase vehicles with special liveries that never were released to the public.

The main menu wreck is based on a Thrasher, a Gold class muscle car with an incredible amount of damage not possible on vehicles during normal gameplay. The common.dds file under data\tracks\menu\textures reveals the aforementioned supercharger on the lower left of the image. Notably, its engine texture is bright and shiny compared to the one used for player vehicles. 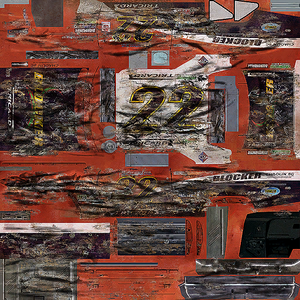 An unused bonus car icon is found in the data/menu folder. The bonus car is also referenced in the script files as the skull. It seems to have been reused in Ultimate Carnage as the Bonecracker.

In the car_icons.bed file, there's a line referring to it, but it's commented out

Unused wheel textures are found in the data/cars/shared folder. The other appears to be a chrome five-spoke steel wheel from a first-generation Ford Mustang, circa 1966.

At one point in development, the ability to fit the player's vehicle with a visual Supercharger/Turbocharger modification was removed.

The following audio files were to be used for either the turbo or supercharger. 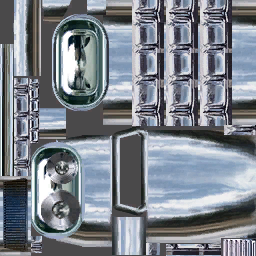 In Japan, the game was renamed Racing Game: Chuui!!!! It's not entirely certain why, but in any case the game got a new logo that also replaced most instances of the FlatOut logo in-game (such as one of the signs in the main menu).

The name change was ultimately irrelevant, as Japanese releases of subsequent FlatOut games kept their original names, albeit as FlatOut 2 GTR in the second game's case.

Probably one of the biggest selling points of the game (and of the FlatOut series in general) is the drivers flying off of their vehicles with the best ragdoll physics the mid-2000s offered. However, for the German release things were altered a bit in order to avoid a higher age rating from the country's ratings board: the human drivers were replaced with crash test dummies, a change that would also be seen in subsequent FlatOut titles released there. The male/female icons when creating a profile were altered as well, and all screams the human drivers use when flying are not used in this version.

Curiously, the Japanese release features a mixture of both: regular race events and demolition derbies use the humans, while the stunt events use the dummies. The male/female driver icons are also those of the humans in this version.

In all versions, these files exist.

A patch 1.2 only released for US retail version and added an extra trailer in main menu.