A different press start menu from earlier in development 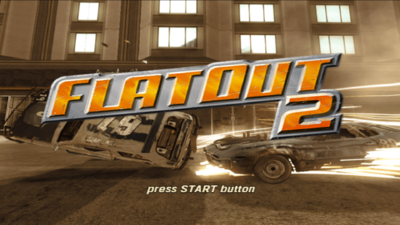 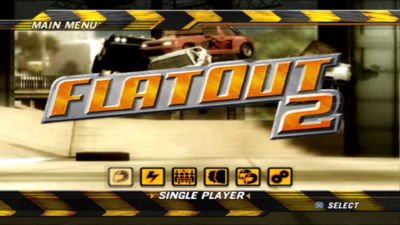 Extra Option On The Main Menu

Removed option which basically was a randomizer, it selected a random race and car for you.

Top drivers earlier in development didn't had their full names displayed, instead only their initials. In this build Katie Jackson is named Sally Taylor hence the S initial on the result screen. P stands for player which is the user's name. 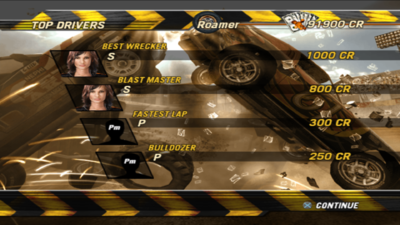 An old gender select screen from very early in development. 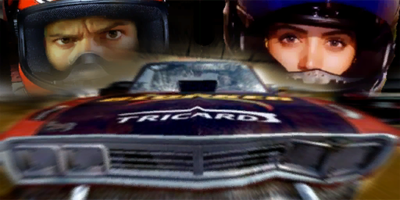 According to control_options_bg.dds's filename that's what it is. Or, was. Or rather, was supposed to be. 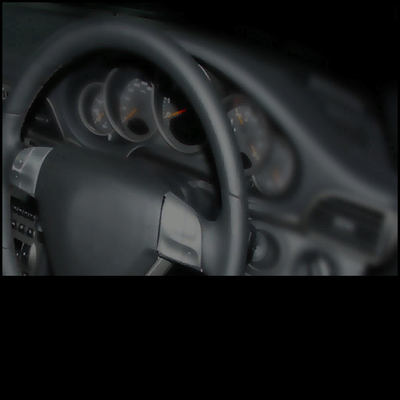 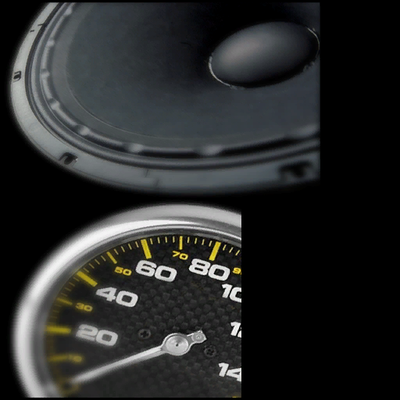 Many images of the same car (Flatout 1), with text according to their filenames. It seems like very early identification tests, just seeing if the displayed images accord to the racers and their selected class. A small thing to note is that ai6 is the only one that lacks a class_c counterpart.

Also interesting is the car in the derby track icons. Is it a car from Flatout 1, or it is unknown?

It appears that originally the track select screen was the same as FlatOut seeing as it's the same formatting, also, no names yet! There are small details that change from file to file:

track_icons_s.dds and track_icon_2_s.dds. Despite looking the nicest, they're probably the earliest, as it seems like the others are edits from these.

track_icons_2.dds and track_icon_2_locked.dds. Note the early names for the stunt minigames, and the ones without any name. Also, only in the unlocked version, the last track icon's number was edited by hand. 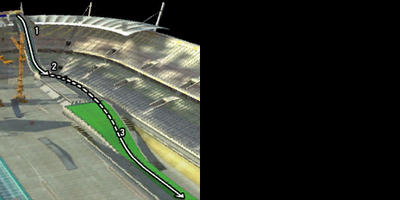 placement.dds shows a very basic position-indicator. Weirdly, only '5th' can be seen if the alpha-channel isn't turned off. 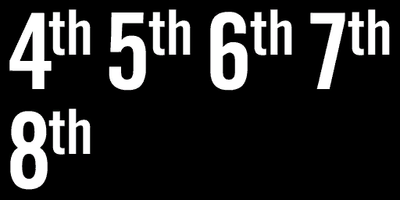 "Rabbits Are Roadkill on Rt.37"

"Rabbits Are Roadkill on Rt.37" is a song that only appears in files of the Xbox version of the game and is completely unused. When modded in, The song appears to have a working text-card to show when the track is playing.

A sound for the audience booing you in the stunt stadium, most likely used for failing stunt tracks at one point. In Ultimate Carnage this sound ended up getting used, for when being disqualified in a Stunt event (aka driving off the allowed area without launching the driver).

As the music doesn't last for long in this game mode, it doesn't get a text card saying its name and band due to the short length. Still, there is a file with configuration for showing track names and artists, but in all of them 'Artist' and 'Song' are defined as "Henri"

Early on, it appears that the driver bios were MUCH longer... like... this is a racing game... why are they so long?

Fast, aggressive and skilled, these are the words you hear often when there's talk about Jack Benton. Few can match the speed of this 28-year old driver, and even fewer will survive the crashes with him. Racing has been Jack's whole life since he was ten, it's his second nature. He spends lots of his free time practicing and aims for perfection. Jack will do whatever it takes to win. Jack is determined, experienced and cool, though he does display his sharp wit and humor occasionally, especially in company of ladies. This could be a reason why Jack came to blows with Jason Walker on a night out in bar, which ended up with Jason short of a few teeth and a girlfriend. During races, Jack keeps his cool and doesn't tangle up in unnecessary crashing for the sake of it. Instead, he bides his time and utilizes all the possible aspects in the race to his advantage. He is quick to react and before you know it, you'll be left behind his exhaust fumes. Jack is a restless soul, doing odd jobs around the globe, trying out some dangerous hobbies and living a carefree lifestyle. Jack has gotten quite good at ring of fire events where he flings his body superbly through the flaming hoops. Still, the most relaxing place for Jack is behind a steering wheel, going flatout.

If there is someone who can threaten Jack Benton's win, it is the 29-year old Sofia Martinez. Sofia hails from Latin America and brings her calculating nature into the race tracks. While her style is completely different from Jack's, she still often finishes first. Whereas Benton's style is aggressive and calculating, Sofia's is based on sheer driving skill and tactics. She picks the best lanes and sticks to them, trying to avoid contact where it is unnecessary. Sofia can be seen as rough, distant and outspoken, but generally she is the most professional of all racers in FlatOut. Most of the time she holds up her public image as the coolest racer around, but occasionally her private life charm and warmth comes through. Sofia's calculating nature gives her a natural advantage in royal flush, where she continually comes up with the highest combination of cards.

34-year old former president of the Casual Driver's Club, Sally Taylor found out that her driving style is better suited for race tracks than for rush-hour traffic. During her years sitting in the traffic jams, she has grown impatient and is quick to react to ever-changing situations. This makes her a dangerous and unpredictable opponent in the race tracks. What Sally lacks in her driving skills, she puts up in aggressiveness. Sally is known to ram against a fellow driver just for the sake of it and this usually creates situations where Sally can take ground while leaving the other racers tumbling on the road. Sally has a great deal of arrogance and generally thinks less of her opponents. It would be wise to avoid Sally or make sure she isn't racing near the top three... Unless you enjoy seeing the top drivers turn to lawnmowers and drive anywhere except in the road. Sally's crackpot nature makes her proficient in ski jump and her aggressive side is displayed in the field goal stunt arena.

Katie was born in Kansas and is the youngest of all her five sisters and six brothers. She spent her childhood on her family's farm, tending cows and chicken until the herd was ran over by a speeding race car. The tragic event changed her life profoundly and the farmer's daughter became an overnight racer. Nowadays, the 21-year old Katie is cheerful and easygoing most of the time, but may be a bit slow in the head occasionally. She often gets in trouble at the race track, either because of her lack of skills or by ill judgment of the situation ahead. These accidents' often lead other racers to think of Katie as silly and bothersome, not someone that is fit for the rough race tracks of FlatOut. Still, her presence brings livelier atmosphere among the rest of the racers. Katie's physique is excellent for high jumping and her fearless mentality has prepped her for the baseball events where she also prevails.

Jason Walker is a former 27-year old bouncer from Ohio who became a race driver mostly to get his revenge on the top cat of racing, Jack Benton. Jason inherited his first car from his late father, who was a catholic priest until a job related accident left him decapitated. Few years ago, Benton stopped by the bar Jason was working in and amongst other things had a chat with Jason's girlfriend. Jason was left picking his teeth from the floor and Jack left with a new girlfriend. Jason is a short-sighted and aggressive driver, often utilizing various ways of bullying his opponents into submission. During races, Jason is known to battle aggressively throughout the race, often claiming a lane and sticking to it no matter what. Especially on close quarters where positions are quick to change, Jason can go totally off his rocker and ram everyone off the track, no matter the consequences.

Ray is 27 and has collected a fine line of old motorbikes and old American cars. He got his first motorbike in the age of fourteen while living in Jamaica with his traveling family and has been racing ever since. His motto "Live and let drive" sums up his driving style perfectly. While he enjoys taking risks, he always tries to ensure that his driving doesn't endanger the other competitors. Ray is calm and laid-back, almost casual in his driving style. He isn't in the race for the competition, but just for enjoying himself and can easily leave the race track for the other, more competing racers. Ray is also a natural in the bowling arena and rules over the basketball court. Still, after the dust has cleared, Ray can often be seen in the top three. On his spare time he likes to spend time with his friends, collect and repair motor vehicles and listen to his extensive collection of reggae.

Frank Malcov is a 32-year old former top driver who hit his head and shattered his hand in a race accident, after getting bumped off the track by Jack Benton. Since the accident, Malcov hasn't been able to win a single race. While it is clear to others that Malcov's career as a race driver is over, he still firmly believes that with practice he'll be able to make a comeback. Malcov has a strong presence to him, but often displays himself as a well-meaning, but incoherent person. In the race track, Malcov still retains some of his former killer instincts and can be quick to react to the ever-changing nature of the race, but usually ends up roof first into the nearby gutter because of his way of overestimating his skills. Malcov is rarely seen in the top ranks anymore. Malcov's accident led to interesting developments in his stunt career. His body shape is very aerodynamic and therefore he excels in curling and stone skipping, but is lousy at high jump, ring of fire and ski jump events.

The codes to unlock bonus cars are different in the GTR version.

Further, the GIEVEPIX code (1 million credits & all cars) does not work in the GTR version.

Like FlatOut, it used the dummy model in the GTR version.

The cars' names are actually all images instead of text, despite the same font. In the fifth file, car_logos_5.dds, the name CHUCK is seen, and no car in the game's got that name. Maybe this was supposed to be the name of the car just discovered in the press-release build. 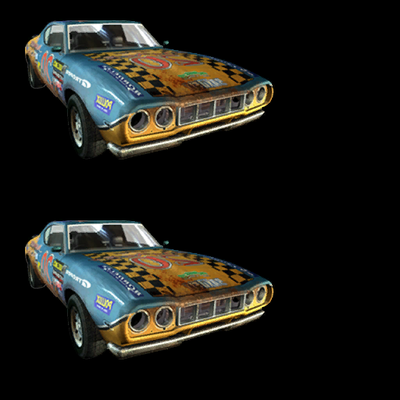 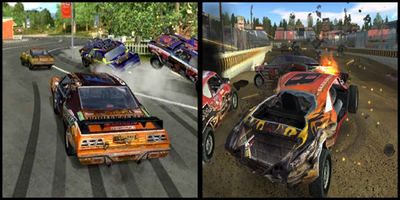 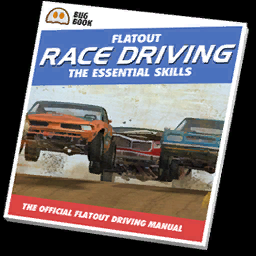