Gnosia is a single-player implementation of the "Werewolf"/"Mafia" style of social deduction game, wrapped in a VN-style framing story about being trapped in a time loop aboard a spaceship where any one of your fellow crewmembers could turn out to secretly be infected by a homicidal alien parasite.

It overcame a late release on an already-discontinued system to receive glowing reviews and something of a cult-classic status, though the English localization ended up being overshadowed by comparisons to a certain other game about finding impostors in space...

Some of the image files used to build character dialogue portraits include expressions that are never used.

These expressions appear to be based on used expressions from Raqio's standard portrait, which this portrait is a simple edit of.

Along the same lines, these unused expressions correspond to used ones from the similarly-posed portrait of Raqio in casual clothes.

This expression was likely meant to be used for scenes with a Gnosia Yuriko, but this never happens in the final game, with even her results-screen portrait as Gnosia simply reusing her default expression instead.

Unlike all other unused images, this sprite is absent from the Switch version's files, having been replaced with a duplicate of one of her other expressions.

This portrait file is presented in full (rather than as separate extracts and mockups like the rest) to avoid excessive repetition, because a staggering 6 out of its 8 expressions go unused, including the default one—the only used expressions in it are the rightmost one on the lower row and the lowest one on the right column. 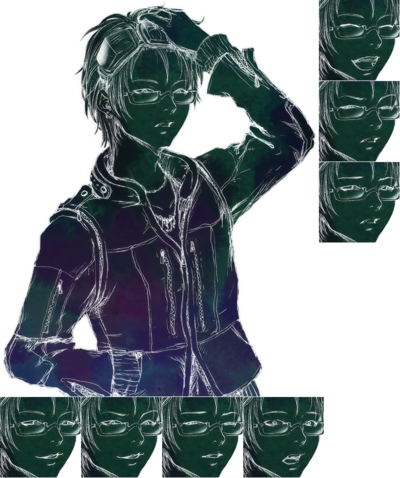 When choosing someone to visit at night, the box graphic displayed behind the selected character's name and portrait is colored differently for each character, but one color variant of this box exists in the files that isn't used for anyone.

While the ship map shown at night does show multiple floors, these labels aren't used on it anywhere.

The only roles that can be publicly claimed are Engineer, Doctor, and Guard Duty, but the icons used to designate claimed roles have unused variants for every other role in the game as well.

(Note that the speakers listed here are speculative based on context, character speech patterns, and how the lines are organized in the code.)

A full set of debate lines that appear to represent each character claiming the Guardian Angel role. Notably, they seem to describe the role as protecting their target via physically guarding them, rather than by delaying the ship's warp as described in its introductory scene in the final game.

Similarly, these unused lines appear to correspond to characters claiming the Gnosia role.

No "generic" debate lines for characters introducing themselves like this are used in the final game, perhaps because they would have become quite tedious to go through repeatedly given the size of the game's cast.

These lines are fairly similar to some of the used lines for character comments upon winning a loop as a human, but were left unused for unknown reasons.

The blank-slate player character has dialogue lines seemingly corresponding to certain types of comments that only NPCs can make in the final game.

These lines were likely meant for the Definite Enemy action, given how they seem to correspond to the set of characters who are able to use that action (those with a high Logic stat), and how one of them matches the phrasing used for all of Jonas's Definite Human/Definite Enemy lines. The used Definite Enemy lines only have variants accounting for the target's status (whether they're known to be a specific enemy role or known to not be a specific crew role), rather than for how the target was found out like in this set.

In the Vita version's script, each character that cannot use the Definite Human and Definite Enemy actions (SQ, Shigemichi, Chipie, Comet, Sha-Ming, and Kukrushka) is assigned these lines for those actions, so there are a total of six copies of each. The duplicate strings were removed for the Switch version's Japanese script, but in its English script, some of the lines were seemingly localized twice, thus becoming duplicated (sort of) once again...

Given their positions in the code and the speech patterns used, it's likely that the English lines were localized as if spoken by SQ and Chipie, specifically.

From context, these lines appear to be for human characters addressing a Gnosia player character who's about to eliminate them, but in the final game choosing a character to eliminate at night results in no additional dialogue (outside of certain story events), and the only dialogue upon winning a loop as Gnosia is the comments from any surviving Gnosia allies.

A set of lines left untranslated in the English script that appear to be from a scrapped event concept mentioned during an interview with two of the game's developers, where "if a male player survived to the end with only Sha-Ming left, he would convince you to have a sex change and you'd continue on as female".

These placeholder names and descriptions for additional rooms to visit at night are only present in the Japanese script. Interestingly enough, the locations of all four of these rooms are still labeled on the map of the ship seen in the final game, and the (used) Power Room's description references its connection to the Gravity Control Room on said map.

Also exclusive to the Japanese script is this set of what appears to be Werewolf-themed character roles.

This sound effect might've been intended for use when votes are tallied, as its name matches that of the sound used for voting results ("se_countend"). In the final game, vote tallying instead reuses the sound effect for cancelling out of a menu ("se_cancel").

In the Vita version's script, the text string for this sound effect's name is stored with the dialogue lines for the scrapped Sha-Ming "sex change" event, implying that it would've been used during that scene.

These sounds' names aren't referenced anywhere in the Vita script, so what context they might've once had is unknown. While their names do appear in the Switch scripts (which don't organize strings by their context like the Vita script does), the sounds themselves remained unused regardless.

Uniquely, this sound effect is only present in the Switch port's files, and not in the original Vita version's. Like the above sounds, its name isn't referenced by any text strings.

For the most part, the filenames of event CG images are prefixed with "ive" for those used in the first 13 loops (the "tutorial" segment of the game) and with "ivep" for all others. However, for unknown reasons, the images for four specific optional events ("A Prayer To The Stars", "Kukrushka's Song", "Lovely Kukrushka", and "Plastic Flower") use "ive" as well.

For "ivep" CGs, the first double-digit number in the filename specifies the character the event is about, and the second specifies which of their events the image is for, counting in order from "00". However, the labeling for SQ's events jumps from "ivep02_00_" images to "ivep_02_02_" images, with no "ivep_02_01_" set to be found, implying that she once had an additional event that was later removed without updating the filenames to compensate.

The Nintendo Switch port made some minor changes from the Vita original:

The Switch version has received several minor updates since release.

Fixes remaining text issues with misused pronouns, and a few other small fixes.

Changes made are currently unknown.