Gunstar Super Heroes is a sequel/remake of the Genesis original.

Several unused music tracks exist in the ROM. The game was originally supposed to feature numerous references to classic Sega games, but unfortunately, they were axed very late in development. All of these songs were based on their Genesis/Mega Drive versions.

The protagonist from ESWAT, which possibly fought against the player in one of the areas of Black's Dice Maze. (Colors are incorrect.)

Unfinished graphics of one of the monsters seen in Altered Beast. Apparently, it was supposed to be one of the bosses in Black's Dice Maze. (Colors are incorrect.) 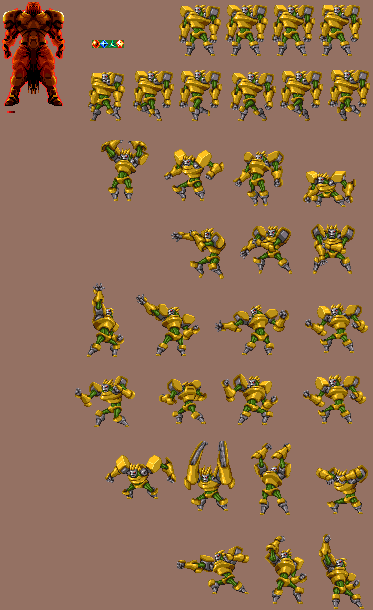 Numerous unused attack frames for Golden Silver, which clearly show that the final boss was supposed to be able to use melee attacks against the player.

Kicking animation for what appears to be an early version of Red. (Colors are incorrect.)

Early artwork for Yellow, also using a very different character design, which appears to depict her piloting...something. (Colors are incorrect.)

Unused portraits of Yellow and Green. 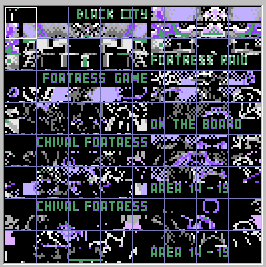 Some unused tiles and names for areas of Black's Dice Maze.

An unused font, which includes a logo for something called "kein soft dec."

Between the Japanese and American versions, most of the differences were merely aesthetic.

The European Gunstar Future Heroes had further changes, such as multiple languages (including Japanese, which still refers to the group as Gunstar Super Heroes) and changing Earth's menu symbol to that of a rotating "goddess" (Mother Earth?) similar to that seen decorated in the 3YE headquarters. To simplify the language select option, the level names were entirely removed.