Jet Moto 2 is the second entry in the hoverbike racing series on the PlayStation. It significantly differs from its predecessor by cutting the starting grid in half, introducing new handling mechanics and featuring more varied track environments.

Found in NAVIGATE\PICKRIDE.TMS. Although this graphic is technically used in the rider selection screen, it is never seen by the player as the riders' sponsor backgrounds are displayed on top of it. As its text suggests, it uses 16 bits per pixel, unlike the other backgrounds which only use 4 or 8. 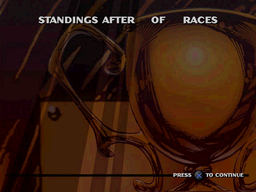 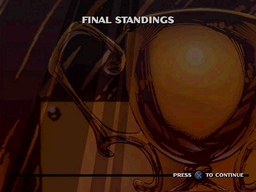 The original Jet Moto uses three different background files for its season standings screens, all with header text baked onto the graphic. Jet Moto 2 optimizes this by using only one with header text generated on the fly, but still leaves the other two .BS files sitting unused and untouched from the previous game. 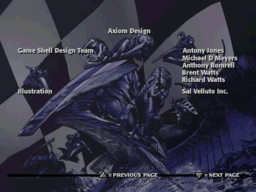 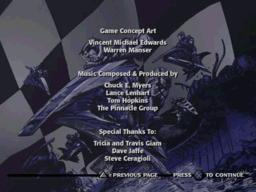 Similarly to the case above, the original Jet Moto uses eight background files for its in-game credits, while the sequel only uses six, rendering the last two unused.

Note: in both cases of leftover Jet Moto content, the relevant .BS files are only present in the original 1997 release of the game. 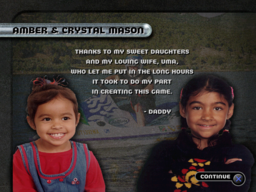 Found in CREDITS\SCREDITS.TIM is a dedicatory message from art director and developer Mike Mason to his family. A similar message is present in the original Jet Moto, where it may be accessed by setting specific options and entering the Credits screen with a specific controller button pressed, as well as Streak Hoverboard Racing.

Jet Moto 2 was released under different titles in Europe and Japan, with all instances of the game's logo in the menus being changed accordingly.

In the Japanese release, only rider bios and ending/prize screens are localized. Text rendered in real time - such as game mode descriptions - is either left untouched or is simply blanked out. Notably, the loading screens for Jet Moto 2 tracks lack all of their flavor and description text, with minor art alignment changes as a result.

Another minor design change seen in the Japanese version's menu art is the replacement of all instances of generic arrow icons with proper PlayStation controller buttons.