Kart Fighter combines the character design and engine of Street Fighter II (or at least the engine of its NES bootlegs) with the characters, opening screen, and some music of Super Mario Kart, resulting in possibly the best bootleg fighting game in existence. Each character has their own "home stage" and appropriate special moves (Mario and Luigi shoot fireballs, Koopa Troopa attacks by getting into his shell, etc.).

It's a solid concept - after all, who wouldn't want to see (or have) Luigi punch Mario in the face or Peach knock Bowser down for the count or...

Waitasec...did Nintendo and HAL actually get a License to Print Money™ idea from an unlicensed game?

The game has about 12 actual characters, but the last 4 are obviously inaccessible. This is due to the fact that Kart Fighter was built off of Mortal Kombat II which in turn was built off of Master Fighter VI'. Master Fighter VI' had a roster of 12 characters (not including duplicates). While some of the data for the last four appears to be tampered with, it was never removed and contains some minor references to the previously-mentioned game. These can be accessed either through changing addresses 00B0 for Player 1 and 00B1 for Player 2. Alternatively, before a match starts you can change 007B for Player 1 and 007C for Player 2. The latter method will load the proper palette and stage for the match. You can also access alternate palettes this way by taking the original value and adding 0C to it. 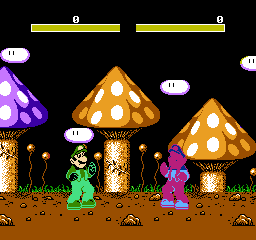 Shares the same value as Shang Tsung in Hummer Team's Mortal Kombat II. Like Shang Tsung, his only move in the game is a fireball (Down, Forward, A) which appears as a mess of two tiles; the same length as Shang Tsung's fireball. However, he does not have the ability to transform and as seen above, only uses Mario's sprites. His first player palette seems to be based off of Toad's second player palette. Using the second address in the second method starts the match on Yoshi's stage. 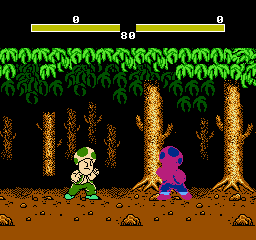 Even though they appear to be Toad with his second player palette using the same moves, their commands are based on the aforementioned characters that appear in Master Fighter VI', complete with the same distance requirements to perform them. However, 0B uses Yoshi's move commands; this is because Ken's special command list referred to Ryu's in Master Fighter VI' and Yoshi takes his spot. 09 uses Toad's stage, 0A uses Yoshi's stage, and 0B uses Koopa's and Bowser's stage.

Before a match begins, change address 0058 to a non-zero value below 0B to re-enable Endurance Matches, a leftover from Hummer Team's Mortal Kombat II. Defeating the opponent will result in the opponent getting replaced by whichever character represents which value.

Everyone's jumping punch animation only has one unique frame, but there's a startup frame for everyone in the ROM. Some interesting things to note:

Effects for what looks like a projectile making contact. Only Peach, Donkey Kong Jr., and Bowser seem to contain these. In-game, projectiles will just vanish on contact with a fighter and will just pass through each other. For some reason, Peach's sprite is found in two of her graphic banks.

The first four graphic banks for Mario are completely unused: they're tiles for Mario's stance, walking animation, blocking sprites, getting hit sprites, dizzy animation, and one of his jump sprites. These reappear a bit later but correctly flipped so Mario's facing to the right (like the rest of the sprites), whereas the unused ones are facing left. While these graphic banks appear first, they all appear to be the same (but flipped around obviously) with the exception of one of his dizzy sprites. This dizzy sprite's hat is more like the rest of Mario's sprites, whereas the one used in-game looks much flatter. This was likely due to the fact that in the graphic banks that did get used, a star was included for when Mario becomes dizzy and ended up replacing one of the hat tiles, thus requiring his hat to be redrawn. This also suggests earlier in development that the star circling around the fighter's head was not yet considered.

An alternate crouching kick for Mario. In-game, his crouching kick sprite is the same as his jumping kick and his flying kick special. Interestingly, all the sprites that use the same torso tiles are in the same graphic bank (including the unused jump punch sprite) and they just replace the bottom-half tiles on this sprite.

Koopa hiding in his shell, unknown purpose. In-game, he uses different sprites for his shell attack.

Koopa partially withdrawn into his shell and curled up in a ball. It could've been used for a possible special attack in the same manner as Blanka's ball attack.

Unused startup animations for Koopa's basic attacks. These look like they could work for his standing punch and his standing kick.

It's unknown what this could've been used for. It could be a sprite intended for Toad's upwards kick, but the expression on his face implies this could have also been an unused hit sprite.

Two attack startup frames for Toad. The first appears to be for a jumping punch, but Toad attacks with his right hand in-game.

A jumping punch sprite where Yoshi throws a punch at a different angle. The used jumping punch appears to be the original sprite, while this sprite reuses tiles from it.

Peach appears to only have one sprite for when she wins a round, and selecting her has her switch between her standing sprite and her win sprite. However, she has a second win sprite that goes completely unused.

Peach has a graphics bank for not only a duplicate of the unused exploding projectile but what appears to be a spinning effect. These might have been intended for her spin attack. The first sprite is rather odd: not only does its tiles suggest that its tiles are mirrored but there appears to be blank tiles mixed in, suggesting the sprite isn't complete.

Unused sprites for an alternate throw or a special command grab. Donkey Kong Jr.'s first throw sprite was mixed in with these, suggesting it was once part of this attack.

Bowser was supposed to use a different sprite during his standing kick. The game instead reuses a sprite from his jump punch.

An earlier version of Bowser lying down on his back.

Sprites for a ball attack for Bowser: a start-up frame, a ball frame, and possibly two recovery frames. This is a bit similar to Koopa's unused ball attack sprite, but Koopa appears to lack additional frames.

Graphics for a Game Over screen. The corresponding tilemap can be found at 0x17B91.

Early text for the title screen menu, which would have read "1 PLAYER", "2 PLAYER", and "OPTIONS".

When Koopa blocks while standing, a chunk of his foot apparently goes missing.

These sprites have some tiles defined for them but go missing. However, it's not too noticeable as Koopa's other sprites tend to have missing outlines (often due to tile limits).

Toad loses parts of his foot in some of his sprites.

Yoshi keeps losing parts of his feet in some of his sprites, most notably his tongue attack.

Some small chunks of Yoshi's sprites go missing. It's not so noticeable for the same reasons as Koopa.

In one of her spinning sprites, Peach was supposed to have more hair than what's shown.

More details going missing. The rightmost sprite was supposed to have more hair, but a tile goes missing in-game.

While this does play when deciding to continue after a game over, it only plays for less than a second. This fanfare can also be heard fully on AV Bishoujo Senshi Girl Fighting's VS screen.

Some characters contain some odd move commands that have remained since Hummer Team's Street Fighter II and Master Fighter VI'. Some of them may have been forgotten, and as a result performing these can lead to some characters doing strange things. They can all be accessed in-game. None of these were ever properly taken out until Mortal Kombat II's revision of the engine.

Two heavily-corrupted fragments of the game's source code are present in the ROM at the hex addresses listed below.