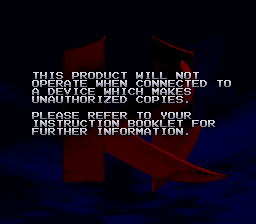 A number of anti-piracy measures exist, sharing many of the same routines used in Donkey Kong Country 2 and 3.

Failing any of the below tests will write the string I PiRatE to RAM address $7E0200 and then display the above unauthorized device message on boot up.

Almost immediately after booting, the Emulation Flag and Direct Page register are examined. The console already being in Native Mode and/or the Direct Page register containing a non-zero value fails the test as these are evidence that another program (e.g., a backup unit menu) was running before the game had a chance to boot.

Checks for operation $4Cxxxx, where xxxx is the Reset Vector.