Lunar: Silver Star Story Touch is the fifth release of the first remake of the first Lunar game, incorporating elements of the third remake. Not confusing at all, right?

The Lunar series are classic JRPGs featuring memorable characters and impressive (for their time) animated cutscenes.

This iOS port is ported from the source code of the Saturn version, but incorporates elements of the Windows and PSP ports. Specifically:

Human Nall wouldn't be seen until the sequel, but portraits for him can be found next to the other characters' portraits! These don't appear in any other port of the game, and are in a slightly different art style, so they were probably added when it was ported to iOS. It's not clear where they would have been used, and there isn't any known way to activate them in-game.

The portraits are in two sizes, Saturn and Win32, like all other portraits. However, it's clear that they were drawn at the Win32 size and scaled down because the Saturn size portraits feature anti-aliasing that the other portraits don't, and they don't adhere to the Saturn/PS1 versions' palette restrictions.

Nall's portraits are located in the directory "CoreUI/Saturn/faces" alongside the other character portraits. The files are numbered the same as cat Nall's equivalent expressions, with a "+" indicating the human variant.

A partial set of sprites for human Nall can be found alongside the other character sprites, taken from the 32-bit versions of Lunar 2. They include a neutral animation, and up and down walking animations. The higher-res Win32 versions are missing, suggesting that they aren't used in-game.

Nall's sprites are located in the directory "CoreUI/Saturn/chars" alongside the other character sprites.

The same unused item strings from the Saturn versions are present in this port. The English strings database contains names for several of them. It's unclear where these come from and whether they're accurate representations of what these items were meant to be.

It looks like SoMoGa may have planned to include the Sega CD version at some point, because there are a lot of unused files from that version sitting around. 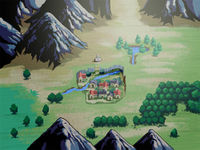 A complete copy of the Sega CD script, in English and Japanese, is included along with the other localized files in the "en.lproj" and "ja.lproj" directories.

An almost-complete copy of the game's soundtrack is contained in the "MegaCD/SOUND" directories.

The "MegaCD/TOMISUB" directory contains an incomplete copy of the Sega CD version's graphics. It includes: