The PlayStation version of Madden NFL '96 was to be the series' first foray into the 32-bit generation and had a lot planned, but was cancelled after EA executives determined that the game did not reach its standards for publishing. PlayStation gamers had to wait another year before they got their NFL fix (excluding NFL GameDay).

Ironically, one of the development teams for this game was Visual Concepts, the team behind the now-immortal NFL 2K series. 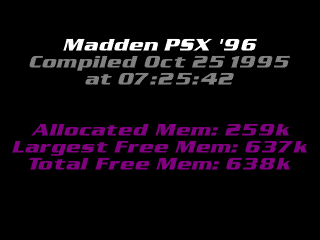 Upon starting the game, this screen is shown which shows the compile date and allocated and free memory.

The file AUDIO.DAT (in the DATA directory) contains a slew of in-game audio.

The audio clips include in-game commentary from the late John Madden and Pat Summerall, as well as sound effects, menu music, and even music used on NFL on FOX (where Summerall and Madden were working at the time; a version of its theme can be found in the 16-bit versions of Madden '95 and Madden '96). In total, it covers 60 MB.