Marble Madness is a port of the classic marble rolling arcade game. This version, published by Tengen, was released exclusively in Japan. Electronic Arts had already published their own version in the US and Europe the previous year. The Tengen port is considered far more accurate (and less lenient) than the EA release, though it is quite a rarity.

This string is located at 0x2BB, right after the ROM header and standard Tengen copyright text: 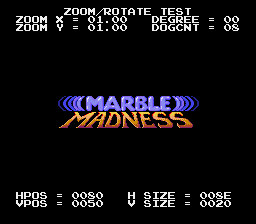 This debug screen allows testing the squash/stretch effect seen with the logos on the title screen. Rotation doesn't seem to be implemented.

Text used in this screen is located at 0x3B85, which is read by a function at 0x253E. Before that function is called, the following steps must be taken:

These steps are accomplished with the following patches:

When Pad1 Start is pressed, it switches to a memory display that is updated in real-time: 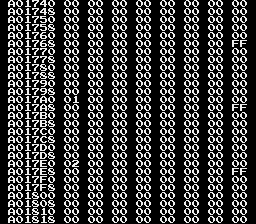 When Pad1 Start is pressed, it switches to the game options screen.