The NES Monopoly is a quality console conversion, even if the AI is still easily exploitable. Coincidentally, it has the same sound engine as Action 52.

Not in Jail Text

It's impossible to select "GET OUT OF JAIL" when you are not in jail since the option is not seen when you're out of jail, so this text is normally never seen.

To actually see this message in-game, open the menu for a player out of jail, set RAM address 0x07BF to 05 to force the cursor to the invisible option where getting out of jail was then press A. 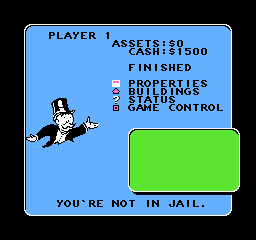 Aside from translating the Monopoly logo and adding the TOMY logo, the Japanese version tweaks a bunch of the palettes, moves the "PARKER BROTHERS REAL ESTATE TRADING GAME" text 8 pixels down and left and changes the English font to a far more readable one. The white outline on Rich Uncle Pennybags was also fully drawn.

In the Japanese version, all text is in Japanese except for the copyright screen, a rather extensive game localization for the time.

The game's sampled voice clips were appropriately translated for each distinct version. Notably, the the Japanese voice clip for getting out of Jail is different, now being spoken by the player rather than the jailer.

The Japanese version's cartridge board was changed to use CHR-RAM instead of CHR-ROM to accommodate more Japanese characters in the font. During times where graphics are switched in the US version, there is a short delay as it loads the new graphics into CHR-RAM.

The Japanese version adds small animated character portraits to the Trade screen. There is a portrait for each of the 8 computer players, as well as Rich Uncle Pennybags for human players. Each portrait has three frames of animation: a neutral face, a happy face, and an angry face.

The European French and German versions change the names of most the computer players. The Japanese version has the same exact names as the US version, just romanized to katakana.

In the German version of the game, all money values are multiplied by 20 (Money values are doubled, then a zero is displayed after every number), and the currency is the Deutsche mark instead of the dollar. Trading is done in increments of 10 DM instead of 20.

Due to an oversight, the AI continues to use the price values from the English version when trading, which were not doubled. This means you can trade properties from AI players absurdly cheaply.

In the French version of the game, all money values are multiplied by 100 by displaying two additional zeroes after every number. The currency is the franc instead of the dollar.

Due to the change in currency, the large dollar sign at the end-of-game screen is replaced by a large pile of coins in the French and German versions.