The 4th game in the Portable/Freedom series and the only one set in the 3rd generation of Monster Hunter. Unfortunately, it got stuck in Japan and Korea.

These two icons remain unused in the game. The first one doesn't have a palette of its own, while the second is a half-height version of the Question Mark Icon used for Amatsu and Alatreon and is located after the last Monster Icon, Anteka, followed by the graphic of the Instructor's face used in Training Quests. 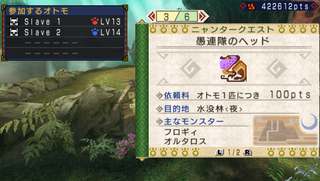