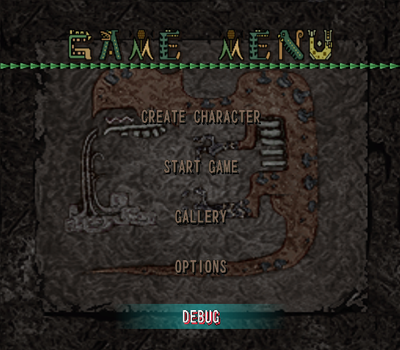 A debug option that no longer functions, remains hidden in the main menu. Selecting it will send you to the opening movie. You can apply the below code to enable this at the main menu.

Earth Crystals are included in the IDs checked for whetstone functionality, but the Earth Crystal item itself isn't enabled to show up in the item bar for use. Changing 0x339D71 in PS2 ram to 01 will enable it. It functions identical to the three other whetstone items.

In the AFS_DATA container, a handful of .amo/.amh files go unused. In the Wii port of Monster Hunter G, these are located in a "debug" folder of the main fpk. 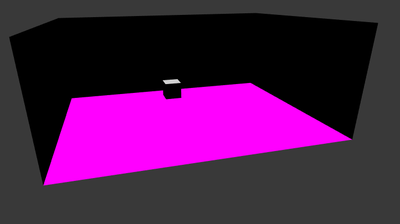 Contains a white cube and four pink sides of a larger cube, and lacks an associated tex.bin textures file. This model has a different set of data tag IDs than any of the other 3D files on the disk. Either has a blank converter timestamp or the timestamp wasn't implemented at the time. Only present in the Japanese release. 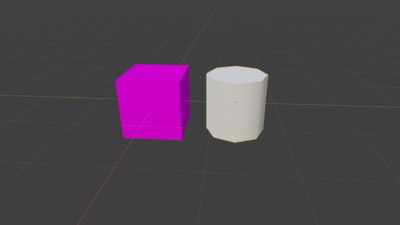 Contains a pink cube and a white cylinder, and lacks an associated tex.bin textures file. Converter timestamp of Oct. 3rd, 2001. The .ahi hierarchy file places both at origin, so they were moved apart for the image. Has otherwise unused and undocumented tags in the .amo file. 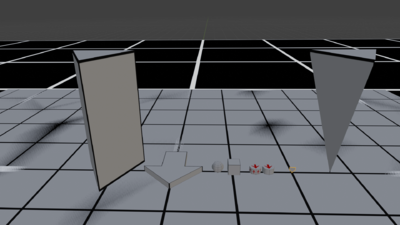 Contains two grids of different scales, and a handful of other meshes. Converter timestamp of Nov. 9th, 2001. Lacks an accompanying .ahi hierarchy file, so the meshes were moved away from the origin for the image. Has otherwise unused and undocumented tags in the .amo file. 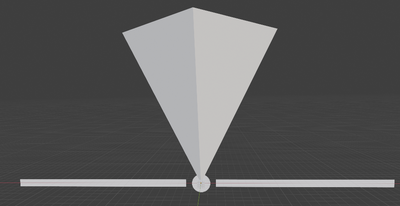 Appears to be a modified gunner crosshair, with a gridded cube at origin. Converter timestamp of April 24th, 2002.

Since the Capcom servers are no longer online, the three elder dragons (Lao-Shan Lung, Kirin, Fatalis) are technically no longer encounterable without cheats or use of a private server. Kirin is especially notable, since no quest files on the disk, online or offline, have Kirin as encounterable, restricting it to event quests only in most versions; PAL copies of the game do have a few of the event quests on the disc as well, however.

select_tex.bin is what appears to be a set of textures pertaining to a demonstration or testing mode, with the five original weapon classes and some quest targets depicted, along with player indicators. An earlier iteration of the male Rathian armor is depicted in the Sword and Shield render as well as the egg quest image. The US release adds two more texture pages of targets.

while cpit1ps.apx and cpit2ps.apx are used for the interface (called the "cockpit" by numerous files), there are unused versions with "xb" instead of "ps", featuring simpler UI elements, an earlier version of the PlayStation 2 buttons, as well as XBOX buttons. XBOX buttons are also included in the network connection textures (net_connect_tex.bin), in the fourth image. Also unused in cpit1ps are status icons depicting a crossed blade and claw, and depicting bloodied teeth. These can be seen used in prerelease gameplay footage.

The US release added shading to a couple of the PS2 buttons in cpit2ps.apx, but a larger change was adding and tweaking a few of the Online Player Status icons. The icons file (pit.apx) also recieved icons for Dual Blades, and seperated the Heavy and Light Bowgun. 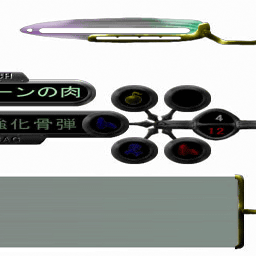 cockpit2.apx depicts a portion of a radically different interface style.

All 1 star and 2 star quests remain unchanged in the US release. The following are quests changed or removed from the Japanese release:

The following are quests added to US MH1 (sorted by quest ID):

The four Fatalis online hunts have map objects defined for Fort Camp and Fort 5, even though the Fatalis hunts take place in the Castle locale. When considering Fatalis is the second monster by internal ID, the Fort is the first locale by ID, and the Castle is the final locale ID, it's possible the Fatalis hunts were tested with or possibly originally intended for the Fort locale, before the Castle was made at a later time.

The international versions of the game has a few more changes from the Japanese version, namely:

All of these changes carry over into the later releases of G and Portable/Freedom.