Sonic Team's first foray into the world of dreams, which contains many scrapped game elements. 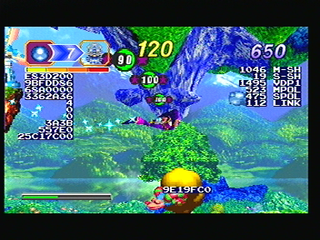 SEGA was apparently clever enough to delete the Debug Menu (and the ABRACADABRA code used to access it) from the game before release, but not enough to delete the actual debug functions. Using the Action Replay cartridge, you can re-enable certain specific parts of the menu.

Use the code 160FFC1C xxxx where XXXX is the numbers of the features you want to activate added together in hexadecimal.

Even though the debug menu itself was removed, the text for options is still buried in binary in 0NIGHTS:

The sprite data for the colorful orbs on the corners of yellow hoops includes three palettes in total: red, green, and blue, as shown below. Only the blue version is ever used in game, but one piece of promotional art does show a yellow hoop with a red-striped orb. The sprite data also contains an unused breaking animation for the object, which is similar to the breaking animation for the smaller yellow dots that compose the hoop. This animation seems to have a slightly modified version of the red palette assigned to it which has greener shadows. In-game, these large orbs simply spin and float away. 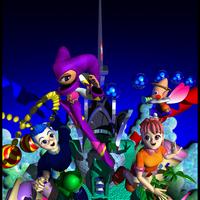 This artwork shows two yellow and red striped orbs on the left.

Included near the sprite data of other common items is an unused sprite that seems to depict a purple hat similar to NiGHTS' own. It has sprites facing in various angles which may have been used for a spinning animation or simply to show the angle of the object to the viewer.

Sprites of whole and opened eggs can be found near the sprite data of all the small Nightmaren enemies except Crewle & Pole for unknown reasons. These are similar in appearance to the corresponding mepian egg sprites but have some differences in design. This suggests that Nightmaren were originally intended to reproduce much as Nightopians do.

In the PCOM file there are also some unused object textures. Two of these are small squares with a gold, blue, and green design. It is unknown what object they would have belonged to.

There also exist leftover textures for a scrapped object whose model and palette data no longer exist in the game. A similar object can be seen in this early demo footage at time 1:34. Palette reconstructed by KetrinDarkDragon.

In PLTEX, which contains graphics for the player characters, there exist some unused faces for NiGHTS. These seem to map correctly to unused morphs of NiGHTS' face. The palette for the teeth textures was slightly reconstructed, as the correct palette is missing.

One of the used faces, showing NiGHTS with a surprised gasp after being hit, seems to be missing its palette, as although the tongue and mouth are both colored black in-game, the tongue pixels are actually mapped to a different part of the palette than the rest of the mouth is. This error also results in the lower edge of the eyes having inconsistent coloring from the rest.

Frozen Bell's graphics include a yellow sign reading "Under Construction" which does not seem to be used anywhere in the level.

In Twin Seeds, sprites exist for an unused palm tree which fits nicely into the empty planter on the level's starting platform. On the right is a mockup of how it was likely intended to appear in-game, constructed by Gigglyman.

The level data also contains model and texture data for two unused buildings, which are similar in style to the buildings which do appear in the level. 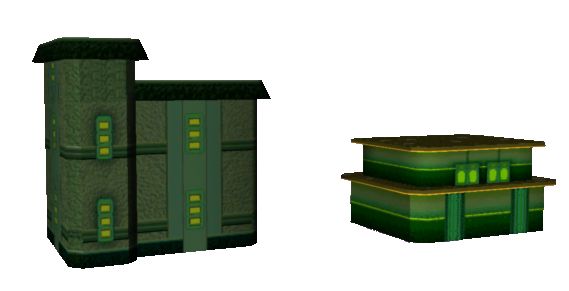 In Puffy's boss arena there are a few paintings of nightmaren, such as a Hollow, a Shleep, and a Kircle. However, there is actually a fourth painting which is not unused but is very hard to see because it is on the outer wall, which the camera almost never displays. It seems to depict a scrapped Nightmaren unlike any in the final game.

Clawz' boss arena sprites include two unused sprites depicting a spikeball and a much larger single spike. They are drawn in a similar style to the gear on the floor of the stage as well as the axle running through it, and perhaps may have been placed underneath the gear for Clawz to fall onto when he is defeated.

Among the sprites for Jackle's boss fight is an unused desert background that wraps from left to right. Its natural theme does not match anything else in Jackle's stage. This texture was found to belong to a small hemispherical object, and was perhaps meant to appear on the other side of a door-like object in Jackle's stage to simulate a window to the outside. Thanks to Andreas Scholl for discovering this. 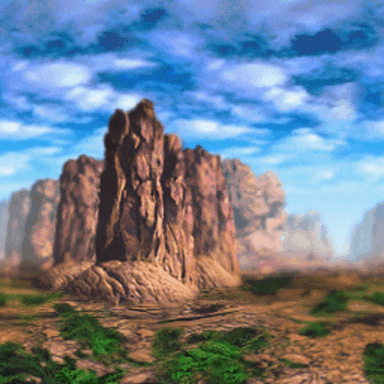 Jackle's data also includes his full set of tarot cards, only one of which (pictured in the center, with the card back on the far left) is used in-game.

Wizeman's boss sprites include a 2D version of his hands, which in-game are rendered as 3D models using a different set of graphics. This sprite isn't used in gameplay but can be seen in some of Wizeman's promotional renders.

The game includes some boss name graphics which are used in one of the menus for viewing boss scores. Among these are two unused names: "Self," who is known to be a scrapped boss, and "Reala Returns," whose purpose is unknown. It may have been connected to 2-player mode, as this involves a second duel between NiGHTS and Reala, but this is not confirmed.

Appearing alongside these names in the menu is a set of small boss icons. One of these, shown in the right column and middle row of the picture below, does not match any boss's design. Because of this it is likely that it was meant for the scrapped boss Self.

There is a large sprite of the word "Ranking" that does not appear to be used anywhere.

The NAME.bin file contains a set of nameplate graphics that are shown beneath their respective characters in the game's credits. They are arranged in alphabetical order in the file, with the exception of "Nightopian" and "Crewle & Pole." It is likely that these originally read "Pian" and "Pole," since Pian is a commonly used alternate name for Nightopians and "Crewle" alone appears earlier in the list. Both "Crewle" and "Self" go unused, as Crewle has been swapped out for Crewle & Pole and the character Self does not appear in the game.

Beginning at offset 0002AE70 in 0NIGHTS is an internal level listing that uses markedly different names for all of the game's levels and bosses. Levels prefixed with P are the standard Dream levels, while levels prefixed with M are Nightmare bosses.

The order of the levels appears to be flipped from the final game, with Claris's levels being listed after Elliot's in each pair. Based on this, Spring Valley would have been Elliot's first level instead of Claris's, with Frozen Bell being Claris's first level instead of Elliot's second, Splash Garden being Claris's second level instead of Elliot's first, and Soft Museum and Stick Canyon swapping places for their respective final levels. Claris would have also had her own unique final stage, SPIRAL-CLARIS, instead of Twin Seeds being the final level for both characters. The boss order quite strangely places Reala as the fourth boss, with Gulpo taking their position as the sixth boss and Clawz being moved into the third boss slot.

The list of bosses contains an entry for Self, here referred to as SELPH [sic], as the corresponding boss for Twin Seeds. The presence of Self in this list was the first known confirmation of the character's existence.

0NIGHTS contains a build date, likely from a slightly earlier version of the game.

The US and Japanese releases contain files for hints in both English and Japanese, marked as "HINT(#)E.PRS" or "HINT(#)J.PRS" respectively. Only one set of these files are used, depending on the region of the game. Although the Sega Saturn's bios prevents you from running games detected to be out-of-region without some sort of workaround, successfully changing the region of the console depending on what version is used will cause the game to run the hints in either Japanese or English. It would appear that this game detects the region of the console it is being run on at runtime, independently of the system bios' region locking procedures.

Inserting the disc into a PC and opening the EXTRA folder reveals two subfolders, each containing eight 640×480 images. 256 contains 8-bit bitmaps while 16M contains 24-bit bitmaps, though the images themselves are otherwise identical.

The latter set is presented here, converted to PNGs.