Paladins: Champions of the Realm (commonly shortened to Paladins) is a free-to-play first-person MOBA-inspired hero shooter, made by the same people who brought you two actual MOBAs; Smite and Paladins Strike. Unlike those two games, however, this game constantly gets into comparisons between Overwatch and Team Fortress 2 despite the blatantly obvious differences in gameplay style and character design. But we digress.

When Furia was announced and released onto the Public Test Server for players to try out, her original design showed more leg than her fully released counterpart. This was due to fan backlash, as Furia's design was not reflecting her much less revealing concept art. As a result, Furia was redesigned to be less skimpy one day after being shown off, with her legs gaining some modesty. The Public Test Server "Default" and "Golden" skins were scrapped, but the "Iron Maiden" skin remained for those who liked her original design.

The removal of the Parts 'n' pieces system, which allowed for mixing cosmetic sets with each other, was removed when the game fully released. This had the side effect of hiding a portion of a specific skin for Talus, Oni, which has hidden kabuki facepaint that his mask now covers up. The model and mask accessory have long since been merged into one model, but the textures and models themselves remain unaltered. 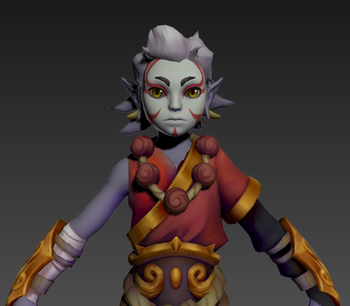 Talents icons that were removed alongside their respective talents circa patch 2.01 to make balancing champions easier. If a Talent name in this gallery has a * next to it, that means that the Talent itself was not removed, but was added into a champions basekit (albeit modified), but the icon was removed from the game proper.

For the longest time, the game lacked splash art for the in-game loading screens for Cosmic and Obsidian skins. This was fully rectified in Patch 3.02, which added proper splash art for all the Cosmic and Obsidian skins, which were previously using the below model renders as a placeholder. Of note, Jenos does not have such skins in-game, so it's odd they made a preview for him. Also, rather curiously, Willo's name is mis-spelled in the files as "Willow" when it comes to her preview.

This match starting response for Khan's "Ameri-Khan" skin voice pack was initially added into the game upon the skins' release, which includes an audio oversight by the sound team. The swearing sine-tone hadn't been added into the sound file to cover the curse up. It was fixed in Patch 1.2 to include the sine-tone.

Here's an odd one. Hidden inside of "WWB_VOX_ChurchHill_Skin01.pck" (Full Throttle Vivians' auto-callouts and some of her voice pack lines) is a file called "WWB_VOX_ChurchHill_Skin01_Marketing_MissedYou", which has a monotone male voice saying the below in a bellowing low pitch voice. It has no relation to any sound in the game, and was added into the game's files in Hotfix #3 of the 2.05 "Steel Forged" update. It is removed as of the 2.07 "Pirate Treasure" update.

A lot of the champions have idle responses for when they're not doing anything. These are likely to be unused for the forseeable future as it's probably to discourage people from not playing the game so the player can hear these voice clips. That and going idle deliberately, disconnects you from the game instead of playing the voice clips.

Fun fact: the second quote for Raeve Maeve was used in the preview for the Raeve Maeve skin.

Androxus, Cassie, and Mal' Damba all have either unused emotes or unused animations for dismounting and mounting onto horses. Even when a Third-person view was added to the game, the animations for mounting and dismounting don't get activated as you're normally moving when the animation would play. In the case of Mounting, you're just thrust upon a horse, without much of an animation. Bomb King's "Grumpy head" taunt was eventually used in update 2.01.

Found in Textures0.tfc is this image, commonly used in Other Unreal Engine 3 games, presumably to pad out the TFC file. 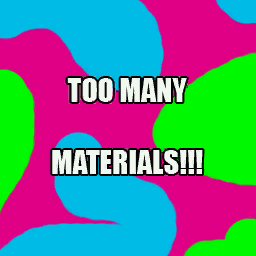