The player was originally supposed to type in kiss angel 187 to access this mode. However, typing that does not do anything, since kiss is also recognized as a "naughty word" in Script 0 as well and is listed by itself before "kiss angel 187". However, it can still be accessed by getting into the internal debugger and changing global variable 101 to 1 then triggering a screen change to activate. Also, because this involves modifying a global variable, this remains active full-time, even if you save the game. 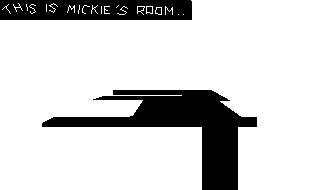 The control layer in Picture #026 (Motel Room 108) has a message along the top of the screen where a player cannot normally walk along.

In both instances where a registration can be picked up, Sonny returns it to the glove box. It is not possible to obtain one permanently.

In file 300.txt, there is extra dialogue between Captain Hall and Sonny Bonds regarding not following orders.

This appears to be a variant of Sonny getting suspended that doesn't get used.

Can't happen since it's game over after the 1st suspension.

Bains is found walking in the sewers and uses his side and back views, but his front view is never used.

Normally Bains shoots his gun from a side view. Inside the Sewer Control Room, it is possible for him to shoot using the back view, but there is no situation in the game where Bains will shoot from the front view.

When the jogger flees, she uses her side and down views. Her running upwards view remains unused. 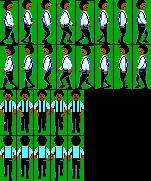 Captain Hall has a full set of walking sprites, but are never used in-game. He is only ever found sitting behind his desk and the occasional cutscene close-up.

These people all have sprites for walking up and down. Only the side views are used. 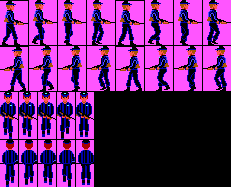 The SWAT team has a unique sprite sheet for the motel scene, leaving the walking sprites unused. 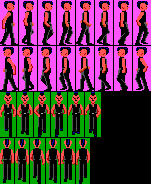 The mugger runs up to (and away from) Sonny, leaving the walking sprites unused. 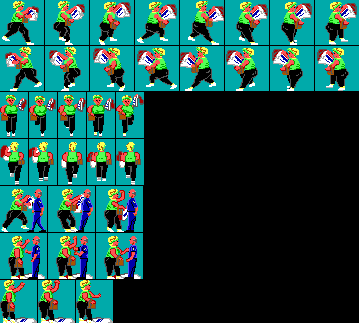 The lady at the mall who had her car stolen has another set of sprites where she is carrying around a bunch of stuff in her arms (rather than empty-handed). 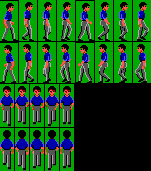 An unidentified man with a full set of sprites. Given the placement of the sprites and the palette used, this set could have been intended for Don Colby, since the hair and shirt colour match his mugshot. 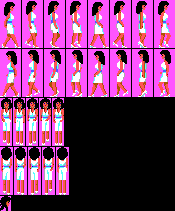 Marie Wilkins has a full set of walking sprites, but are never used in-game. She is seen twice in the game, either sitting down or standing up, never walking. There is an additional sprite with her hair all ruffled up.

Marie Wilkins has a sprite with her legs apart.

The waiter does not serve an empty and he does not return to the kitchen with a full tray.

Luis Pate's car has a set of animations for opening the door. In the final version, the scene skips this and goes right to the car closeup.

The maintenance hole in the sewer has a closed version that remains unused.

Several door sprites for all the motel doors are left unused. Room 206 requires a door, since the picture background leaves it empty, like 108. There are also walking frames for the motel owner, but are unused since the owner stands in the same spot the whole time. It should be noted that the 'kid' who runs the desk at the motel uses the same sprite sheet as the owner, but is shifted down to make him appear smaller.

Attached to the sprite sheet used for the Warehouse district is that of a damaged sign.

Attached to the sprite sheet used for Sonny's Glove box is an additional item that could be found inside.

Marie Wilkin's door is mostly covered by a tree. This view includes a version with a broken window.

The scene after Sonny blows himself up in the sewer has a full set of sprites for an animation. In the final version, only the first frame is used.

The airport clerk has a set of walking sprites. Since only the upper half of his body is shown (and has its own set of sprites), this part of the sheet remains unused.

Two additional features were included in the JP version: Language and Subtitles. Changing the language setting affected your input commands. Turning off subtitles removes the Japanese text that appears under the English text.

An option to enter in the speed was added to the final version. Players can set the game's speed from 1 (fastest) to 16 (slowest). This updated carried through to the JP version.

The final version shifted the box down slightly. The JP version raised the box even higher, widened it and replaced Keith smoking with Sonny's wallet. For some reason the resources for Keith sitting back in his chair were removed from view.999.

The credits were split into 2 pages for the final version, adding a Development System section and giving the full names of those involved Quality Assurance.
The JP version made a number of changes:

For the JP version: