This page details prerelease information and/or media for Fire Emblem: Path of Radiance. 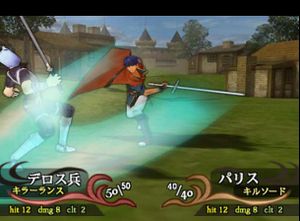 A screenshot of a battle sequence featuring Ike and an enemy soldier, respectively wielding a killing edge and a killer lance. Here, Ike is called "Paris" and is fighting a soldier from "Deros" (an early name for Daein?) It also features a drastically different window design and a slightly different, cel-shaded model style. Given that Ike goes by the name Ike in all other screenshots, this one doesn't seem to be from the later batches and is presumably the single oldest known image of the game.

There are a few oddities. Both "Paris" and the enemy have the exact same, fairly improbable set of battle stats (12 hit, 8 damage, 2 crit), and despite wielding a killer lance, the enemy is actually holding a sword. Given these, it's possible that this image is actually some sort of mockup.

The "Paris" name was later given to a playable character supposedly descended from Ike in the Japanese version of Fire Emblem Awakening. He was renamed Priam in international versions of that game. 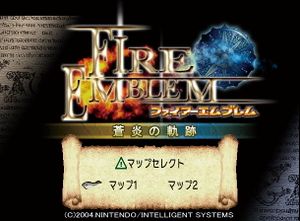 This batch of screenshots comes from what appears to be a very early demo build, circa April 2004. The build featured two maps but these screenshots only seem to feature one of them.

The map itself is visually very rough and simplistic, and its layout doesn't really match anything from the final game. It pits a group of eight playable units - Ike, Soren, Rolf, Titania, Rhys, Lethe, Marcia, and Zihark - against Daein soldiers.

All battle scene images shown take place on the map, and interestingly are much more zoomed in on the action compared to shots of navigating the map. It also looks like fighters, myrmidons, archers and soldiers didn't have unique designs from each other at this point, and all share a model that resembles the finished game's fighters. Additionally, the two spells seen here look distinctly different from the final game:

Ike has a rapier equipped. Since it's the traditional starting personal weapon for Fire Emblem protagonists, it might have been his personal weapon at this point. The rapier was eventually replaced with the regal sword, but incomplete leftovers for it are still in the final game. Ike has a different, more neutrally posed portrait at this point.

Also, the cursor for menus is shaped like an armored gauntlet, like in the final game, but here it's posed completely horizontally instead of diagonally.

Instead of being an axe-wielding paladin, Titania is a lance knight - or rather, a "cavalry lance" (騎馬槍). The vulnerary that she is carrying has a blue icon rather than the final (and traditional) beige one. Her portrait is also different here, with more of a head tilt.

The stat screen is laid out very differently from the final. The "personal data" stats are backed by a bar indicating progress toward the class maximum, similar to most games since Thracia 776, and constitution and weight are listed with all the others instead of being in their own sections. The screen features an image of the Tower of Guidance as its background, and has L and R button icons indicating either page-turning or moving on to the next unit's stats. 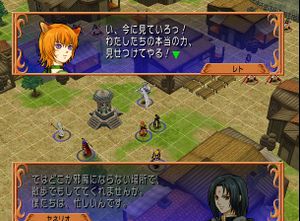 This dialog between Soren and Lethe, unsurprisingly, doesn't exist in the finished game, although the general gist of it - Soren is a condescending asshole, Lethe is enraged - is similar to their only real interaction with each other in Chapter 8. Soren's portrait is slightly different, featuring straighter and shorter hair, while Lethe's was later completely redrawn. Lethe's name is also spelled slightly differently here: レト (Reto) rather than the final レテ (Rete).

This event series featured several demo kiosks for Path of Radiance. This build features an enormous stylistic shift compared to the last one, and both the visual style and layout of windows are more or less what they are in the finished product, although the exact window designs still went through a bit more work.

The featured map is Chapter 1, which at this point has subtle differences in its layout, the environment models and the enemies present compared to the finished game.

The dialog text box has a different, smoother look to it, featuring a flat gradient. Boyd's dialog in this scene went completely unchanged in the final game, though.

At this point, gameplay menus are using a simpler font instead of the serif one in the final game, with the odd exception of the terrain window.

At this stage, Ike's personal weapon has been changed from a rapier to a longsword, but it still has the usual weapon effectiveness over cavalry and armor. It looks like the weapon was just renamed "regal sword" for the final release, since the regal sword is still internally called IID_LONGSWORD. Either way, evidently he was meant to receive his personal weapon much earlier at this point; in the finished game, he doesn't get the regal sword until Chapter 4.

An unusual addition to the screen at this stage is that it lists minor increases to the unit's current stats, in the same way laguz transformation gains are listed in the finished game. There's no way of knowing where these increases are coming from. (Terrain? Supports? An early version of biorhythm?)

The stat screen still uses the Tower of Guidance backdrop at this point. A few window headers were moved around after this point and the window designs were also retooled.

The Shove command is highlighted in yellow here. It's got no special coloring in the finished game, where yellow highlighting appears only on Ike's Direct command.

The HP windows in battle scenes are slightly different and feature the unit's name as a permanent part, and the HP number font is italicised more. The enemy myrmidons also have a faded blue color scheme that's seen at no point in the finished game, while enemy bandits have an olive-green color scheme that resembles how they look in Radiant Dawn.

Titania's stat screen is almost in its final form here, except that it still has the laguz-style number increases and a left-justified row of button instructions. Her base stats are also lower than they are in the finished game, her starting inventory lacks an iron axe, and the vulnerary still has a blue icon.

Soren's stat screen has two subtle aesthetic differences: his beorc unit type icon is just a placeholder, and the divider between soldier and citizen skills is more ornate. His starting HP is also two points lower, and his Adept skill costs 5 fewer points of capacity, than in the final game.

This collection of screenshots appears to be from an unidentified promo reel for the game, which seems to demonstrate a separate build from any of the others seen. The source is probably older than the article from which the screenshots came, but unfortunately there's no attribution on the only surviving copies of the screenshots so there's no way to know for sure.

The HP bar windows for battle scenes were more elaborate at this point, resembling the ones from Radiant Dawn. Notably, at this point they actually bothered to include damage/hit/crit stats in battle scenes, something conspicuously absent from the final version; Path of Radiance is the only Fire Emblem game which didn't see fit to show that important information in battle scenes at all.

Battle scenes in map animation mode had a matching set of HP windows, of course.

The level-up screen also had a simpler design at this point.

Being only a month out from release, almost everything seen in screenshots from this point is as it is in the finished game. Almost.

The icon for Soren's Elwind tome isn't complete yet and uses a plain-looking placeholder tome icon, Elwind's animation is much less bright, and the enemy myrmidon is wearing the generic red colors rather than the specific orange "disguised affiliation" colors used in Chapter 13, the only chapter set on a boat where myrmidons appear. The different-looking HP numbers from the November Nintendo Dream screenshots are also still here.

Retrieved from "https://tcrf.net/index.php?title=Prerelease:Fire_Emblem:_Path_of_Radiance&oldid=764733"
Categories:
Cleanup > To do
Games > Games by content > Prereleases