This page details prerelease information and/or media for Genewars.

Genewars went through a ridiculous number of design iterations, mostly nothing like each other, with only the basic idea of genetic engineering tying them together.

According to comments from Peter Molyneux, development of what eventually became Genewars started in 1989. It's not clear what form the game took at this point, but it was reportedly an idea based around terraforming planets with genetically engineered creature conceived by the American developer Excellent Studios that was considered by publisher Electronic Arts but not taken up. At some point Bullfrog became involved as they liked the concept and continued to develop it.

Early screenshots of Creation are shown in Amiga Power magazine. It's not clear if this game actually is a precursor of Genewars or not; the concept presented is almost exactly the same as Genewars (genetically engineered creatures fighting each other), but more specifically seem to be what the intention of Biosphere was - to find a way to make various creatures live in harmony in an terraformed environment.

The first coverage of Biosphere appears. Based on coverage this year and that from 1994, the concept here is that the player runs a business consisting of sending a team of engineers terraforming planets to the spec of various clients. According to Bullfrog's Alex Trowers, the key concept was it was less of a war game, and would be about creating a stable ecosystem despite whatever conflicting creatures and plants the client asked for[1]. Also according to Trower's blog, Biosphere at this point really was an Amiga game.

Extensive pictures of Biosphere appear in CU Amiga magazine, and show it was a totally 2D game running on a hexagonal board.

The Forthcoming Games from Bullfrog Productions demo reveals two screenshots of a totally different version of Biosphere. It's clear at this point the original Amiga game has now been scrapped, and what is shown instead is a totally different PC game with 3D terrain. The blurb in the picture viewer executable even now frames the title as a "war" game, even if it's using a "cute" character art style. It's not known why the original Biosphere concept was scrapped.

Later in the year Sean Cooper was brought on to work on the apparently ailing redesigned game, and told to "make the design work" [2]. At this point the game was apparently over-complicated with endless pop up windows. It seems this is where the game was retooled to essentially be a simpler Command & Conquer inspired RTS. Apparent conflict with Peter Molyneux over this work caused Cooper to leave Bullfrog for the first time[2].

An image in Joystick magazine shows pre-rendered art of the final sci-fi B movie art style. More importantly the game at this point has now been renamed as Genewars

A preview in PC Zone issue 34 shows the first in-game screenshots of the final game artstyle, but a totally different menu design.

A demo of the game is created, and the final game is released.

The first known coverage of Genewars is in Amiga Power issue 2 from June 1991 (although according to Peter Molyneux the game had already existed in at least some form since 1989). At this stage the game was called Creation - in fact a common codename used for many games in development throughout Bullfrog's history[3], and not necessarily the later Creation. What's outlined here is clearly the start of the game that became Genewars rather than the submersible game as the interview with Bullfrog's Glenn Corpes covers how the game would be about genetically engineering animals to combine their different abilities to best survive in certain environments. At this stage the direction of the game seems to have been more of a puzzle game with the player achieving specific tasks such as protecting different species from each other or using their abilities to navigate the environment, with no mention of aliens or terraforming being involved. In particular it gives examples of a "Trisaurus Rex" dinosaur species eating rabbits and how the player would need to create an intermediate creature to save the bunnies, and using a species based on beavers to bridge pieces of land.

There is a single screenshot of a very early build that looks more like a crude map editor than a game, and just shows some landmasses with a caption saying the actual creatures to populate it had not been created yet. Based on the rest of the article it is likely Genewars really was an Amiga game at this point in development 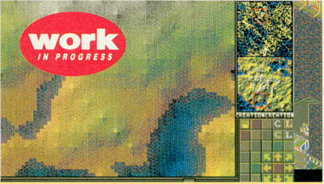 A small preview consisting of coherent build of the game, at this point called Biosphere. A basic summary of the game involving terraforming a dead planet is given, and then it's explained the game was actually originally an Electronic Arts project created by two Americans from Excellent Studios that was dropped, but Bullfrog found the idea interesting and developed it further. The article optimistically states the game would come out for the CD32 games console due to it needing the extra storage space. According to Alex Trowers it seems this really was an Amiga game. 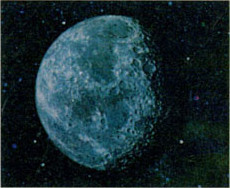 A large preview article on forthcoming Bullfrog games has what seem to be the first in-game screenshots of Genewars, at this time still called Biosphere. These are radically different from any of the versions that followed, taking an even more bold and cartoonish design than even those seen in the press kit. The screenshots show that at this point the game seemed to be entirely in 2D, representing each planet as a hexagonal board similar to Blue Byte's Battle Isle games. Screenshots show characters that could be hired, including Cowboys, Shepherds, and Geologists. The article doesn't really explain the plot and just talks about it being a game of "planetary control" between groups of colonists, with no mention of the final game's Ethereals.

The article also expands on the involvement of Richard Reed and Randall Ho from Excellent Studios, and how they originally based the game on Populus with a similar isometric view. It's said that even at this point in development the game had been "restarted many times, each time being completely redesigned".

It's not clear if the screenshots here are actually from an Amiga version. Considering the other games covered in the feature weren't (and that year's Theme Park was the last Bullfrog game released on the Amiga), it's likely not.

This issue had a special extra Bullfrog demo CD with beta demos of Genewars, Syndicate Wars and Dungeon Keeper on it. It also included short interview videos with Bullfrog's Peter Molyneux discussing all the games on the disc. Here Molyneux talks about the origins of Genewars and how it was originally started development way back in 1989 - what was already seven years in the past at the point the game was released.

In 1995 Bullfrog released a pack of lose screenshot and a simplistic manual viewer previewing their in-development games called Forthcoming Products From Bullfrog Productions. This was released on the cover disc of PC Player magazine in various countries, most notably with the June 1995 issue of the German PC Player magazine. Found on the internet it contains screenshots of games in development by Bullfrog in 1995/96, including Dungeon Keeper, Theme Hospital, Syndicate Wars, Creation, and others. Genewars is included in this pack with some early screenshots, including from the stage when it was called "Biosphere". The archive consists of a directory full of these images in various formats, and a second "catalog" DOS executable that contains more images and basic explanatory text.

The main menu of the "View" program below shows an early logo for the game, and reveals that at this stage the game was called "Biosphere". The logo seems to aim for the "cute and cuddly" angle the catalog text below describes, rather than the darker 1950's sci-fi direction the final game moved towards.

Inside this directory is a DOS executable called "View" that is a generic interactive manual viewer created by Bullfrog. This program contains a short brochure of further images and information on Bullfrog's games from the era, including two very early screenshots of Genewars.

A single slide with text reads:

The two in-game images are clearly from very early in development from a near unrecognisable build of the game. At this stage the view seems to be far more zoomed out than the final game, and the graphics have a different flat hand-drawn cartoon style rather than the darker pre-rendered style of the final game. It's remarkable that there don't seem to be any humanoid characters visible in either screenshot (and the scale means they would be tiny), suggesting that they might not exist and that the creatures might have been the sole interactive characters in this iteration of the game. Some buildings are recognisable as having similar designs to the final game ones, most notably what seem to be Proton Processors, a more traditional windmill design for the Rotators, and some kind of recycling building. There's no HUD visible in either of the screenshots.

There is an image file containing a press release on the game. By this stage the game had been renamed as Genewars (although it is written in the press release with a space!), and the screenshots are named as such. 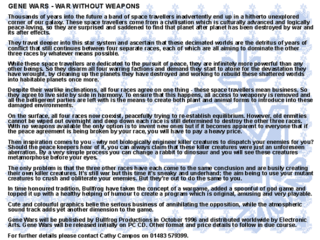 These screenshots are clearly from a much later build than the early images above. By this stage the game has changed direction to its final aesthetic, with the "cute" angle abandoned for a dark 1950's sci-fi movie feel. Most of the final game graphics seem to be in place, with the creatures and buildings now all pre-rendered rather than hand drawn.

The interface is similar to the final game's but somewhat different in practice. There is a clear tube filled with purple liquid that was presumably a visual representation for how much Goop has been collected that was replaced in the final game with an exact numerical counter instead. The various graphs of the final game are not visible here, and neither is the Ethereal ship meter. Creatures have four stats visible rather than only three as in the final. Only the Specialist bar and map display seem to be largely identical to the final game, but are slightly repositioned. It's also notable there is a running log at the bottom of the screen for messages from characters and tips from the game. In the final game these are only delivered audibly with no on-screen message.

These screenshots appear nearly identical to the final game, but have some visible changes when studied. The final game GUI is now in place, with the various graphs visible and the Goop meter now a numerical counter. The question mark icon is now visible and there are only three bars to represent creature stats. Oddly the files from this build are named "BioXXX.gif" (as in Biosphere), when by now the game must surely have been renamed to Genewars.