Theme Hospital is a simulation game in which players build and run a hospital curing patients of comical diseases.

There are two level select methods.

Each difficulty level in the level definition directory (LEVELS) has a template file as its first file (e.g. EASY00.SAM, HARD00.SAM). These files list all possible permutations of rooms, items, and diseases available in the game, with the actual levels only using a subset of these, depending on difficulty and game progression. However, these templates also reveal there is a further unused "disease" called "PREGNANT". As such this can be restored to the game by adding the needed fields to any level definition file. There is a user made mod available that simplifies this.

Pregnancy seems to be fully working but a rough implementation. Pregnant patients have an entry as a "visual illness" which means they would appear with custom graphics, but clearly this did not happen as no such graphics exist, and pregnant patients simply appear as normal women in the final game if hacked in. The "treatment" for the condition is a stay on a Ward and then surgery. It's likely this was abandoned early on due to Bullfrog deliberately moving away from real world conditions, and having a game where pregnant women can die would likely be considered to be in poor taste.

As with the cut pregnancy condition, there are also entries for a cut room simply called "TV" in the level definitions. This doesn't seem to exist in the final game, and it's not clear what it would do (other than containing TVs). The room only costs $5, which is pretty unlikely to be a serious final figure for it.

The official Theme Hospital Diary column in the UK GamesMaster magazine briefly talks about this cut disaster event. Intended as a further disaster beyond the existing earthquake event, it was said that aliens would "destroy, maim and pass around nasty rashes to the population"[1]. It's not clear what this would mean in gameplay terms, but the final game has several elements of the event left in its files. Firstly, there are graphics for the UFO from Genewars present in the low resolution graphics files, along with the hovering sound effect it used in that game. There are also several PA announcements to do with the event that remain unused. Most obviously there are the actual aliens and DNA Fixer that are used in the final game. Aliens can only be seen during specific alien emergencies in the final game, so it seems this was how the leftover resources from the cut event were recycled and why aliens are not regular patients like other diseases.

There are also two lines in the .SAM template entries that seem to be alien related. It's not clear if these were part of the invasion event or something else, but it seems at one point the game would also have alien abductions:

Almost certainly part of the cut alien invasion disaster event. Note this is actually the exact same set of graphics/animation as used in the other Bullfrog game Genewars, so it's not clear if this reuse was to save time, or if it was meant to be an explicit call back to that game (it also seemed to used the same sound effect as in Genewars making this likely). This only exists in the low resolution mode files, in the high res equivalent these sprites are replaced by parts of hospital beds. However, the shadow sprite remains in the high res files, but appears to be corrupted.

Again, this must have been part of the alien invasion event. Animation frames for a patient to actually turn into an alien. What is interesting is the patient starts off green already, so possibly they would start off using the Serious Radiation appearance. Presumably they would receive "Alien DNA" either from being touched by an existing alien or being scanned by the UFO, and then drop to the floor and turn into an actual alien. There are male and female start frames, the female one has the beginnings of being modular so that it can be bolted onto the male version, with a separate head and a skirt graphic that could be set as a layer over the male version. That said there is also an actual dedicated female variant start frame, only missing a head. In the final game all patients with Alien DNA start as aliens already, and immediately play the going to heaven/hell animation when they die.

An used floor tile type. These were used in the alpha version of the game to denote unfinished rooms. This concept was scrapped by the time of the final game.

A strange wooden cart found in the low resolution graphics files only. It's not clear what this was for - possibly it was just an exterior prop for a farmyard or similar. However, its design suggests it may also have been some kind of wooden sedan chair, which suggests it could even be a leftover from the original concept of the game being set throughout various early periods of history.

These are the original graphics used for the drink vending machines before the KitKat sponsorship, as visible in pre-release coverage. Seen (alongside KitKat machines, curiously) only in certain demo cinematics that play if you leave the title screen running without any input.

A leftover from the alpha build to denote an unfinished room the player has just created (with the player completing setup essentially "decorating" the room). It's only present in the low resolution graphics files in the final game.

An unused animation of a spanner rotating. It's likely this would appear above equipment that needed maintaining in the alpha build of the game.

Used in the alpha build to draw attention to pasting tables/unfinished new rooms. However, it only exists in the low resolution graphics files, it's removed from the high res ones.

An animated letter "i". Again Used in the alpha build to draw attention to pasting tables/unfinished new rooms. Also only exists in the low resolution files.

In the final game only male Caucasian patients can have Bloaty Head disease. However, graphics exist for Black and Asian males for this condition. What still seems to be missing are the actual deflating head cure animations for them, which is likely why these were not used. Other needed diagnosis stage animations are also missing too. Presumably they were not finished in time for the final game.

A low height coffee table visible in wards in pre-release screenshots. Only The low resolution version of this remains in the final games' files.

Pre-release screenshots show what appears to be the same object this cut animation was for. It seems at one point Wards would have folded screens at the foot of each patient bed, and patients would fold out the screen, get changed, collapse the screen down again and then get into bed. This animation only found in the low resolution graphics files seems to be the animation frames for this activity, but the rest of the graphics needed for the animation seems to be missing from the files. Likely cut due to it presumably massively slowing down patients getting in/out of bed.

There are a large number of unused announcement lines in the game's files:

Examining the file SOUND-0.DAT reveals that many of the sets of PA announcements have numbered samples that have been deleted, including the REQD, RAND, MAIN and VIP announcement sets. These cut samples are actually included in the PlayStation version of the game but are unused. If restored to the PC versions of the game the RAND sample sets will play during gameplay.

The following sound effects are unused in all versions of the game. Comments by the Bullfrog audio engineers preserved below hint at how they may have been used:

The foreign language files (SOUND-1.DAT to SOUND-5.DAT) all seem to be based on the same 388 .wav sample set. The English sound file (SOUND-0.DAT), however, seems based on a different set of 376 samples that appears to have had some samples improved, and many seemingly deliberately cut. Based on the extensive comments in the wav files themselves, many of these sounds were for rough ideas that were supposed to be removed from the final game. These sounds all persist only in the foreign language version files, but unused:

Present in lang-0.dat (the English file) is a debug menu which does not appear in-game. The string for the menu heading is at offset 42EA, and its items begin at 4453. This menu and its items appear alongside the normal menus (File, Options, Display, and Charts) and their items. This menu is also present in the other language files, but at different offsets. For example, in lang-1.dat (the French file), the menu heading is at 4143.

The menu consists of the following items:

The manual of some versions feature screenshots that show this menu. 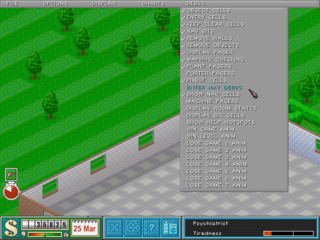 The menu can be activated by patching the value 01 in one of the following offsets, which can be identified by the build date and version strings in the corresponding binary:

Although most menu entries can be toggled, none of the memory variables set by them have read references. There's a single function associated to the entry ENTER NAV DEBUG, that only contains logic to set an unreferenced cursor mode, which falls back to the default cursor mode, represented by the syringe cursor icon.

In the Demo Beta v2.0 builds, most cheat logic has been stripped out, although some references are still present.

The fax machine screen recognized different codes from the retail builds. In particular, code 656120 has a visual feedback that renders the text (!) at the top-left area of the screen.

The main game screen recognizes some keybinds that call a cheat function that contains no logic, accompanied by some loaded strings that appear to be descriptions of the activated cheats. There's no feedback when the cheats are activated, but they can be verified by running with a debugger and placing breakpoints on each instruction where the following strings are loaded:

When the game is run in any of the supported languages other than English (this can be changed in Hospital.cfg), the following differences in sound effects and behaviour can be observed. Based on comments in the corresponding sound files, these seem to be unfinished features that were deliberately cut for the final English version, but mistakenly left in for the other language editions:

If the samples for the research bell (RSRCHBEL.WAV) and baby crying sound (ST_MOAN.WAV) above are restored to the SOUND-0.DAT file using the third party DKTools, they will also play in the English version of the game, indicating the functionality is included in all versions of the game, it is merely the lack of sound files that prevents these working in the English mode.

Sound effect differences for the foreign language versions include:

The English version uses later versions of some sound samples - chopper2.wav and quake2.wav vs chopper.wav and quake.wav for example - suggesting it is indeed a later set of sound effects than those used in the other languages.

There are further unused samples that are only present in the foreign language files, please see the unused audio section above for more information.