This page details one or more prototype versions of Theme Park (DOS).

There are at least two playable demo versions of Theme Park available, both of which are dated well before the final version and have significant differences. Both can be found online.

Described as "the Demonstration Version" in the readme file, this version appears to be dated 22 December 1993. This version has Intel CPU adverts, and its graphics has Intel branding. The readme file says features such as multiplayer and disasters were planned for the full version, and has the Great Aunt inheritance plot.

There appears to be some sort of development log, for inside MAIN.exe is the following string group:

This sprite does not appear to be used, and is not present in the final version.

This submarine is definitely not in the final game. 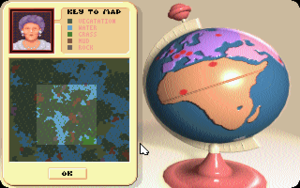 This screen shows a portrait of a woman (which appears to be one of many such portraits present in the game). Maybe this is an early version of the country select screen?

Pressing F10 brings up this menu: 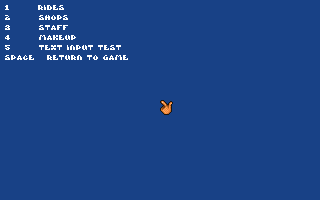 The options are self-explanatory, with the exception of the oddly-named 'MAKEUP' (which is actually the features).

MAIN.exe appears to contain the same debug and cheat menus the final version has in Lang0-0.dat.

Described as the "INTERACTIVE DEMO" in the readme file, this version appears to be dated 19 March 1994. It is much closer to the final, but still has some noticeable differences. It only supports FM music (although it has a full sound setup (completely different to the final version) containing options for other sound cards, only the basic Sound Blaster and Sound Blaster Pro (not 16) settings work. The readme file says to use plain Soundblaster). The readme file says that the Year end screens are not complete, and actually warns the player of the possibility of "wierd graphics being displayed [sic]".

Unlike the Intel demo, there is only one "development log" entry in MAIN.EXE:

This version contains the following sprites, which do not appear to be used and are not present in the final version: 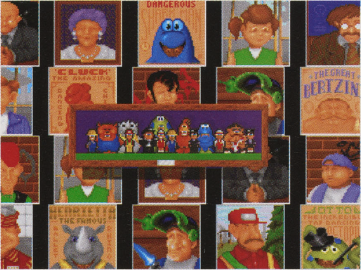 Given this usage, it's safe to assume that the others were meant to be used for the other staff and perhaps the visitors.

The sounds for rides being repaired are different to the full game.

MAIN.exe contains the string "Could not load 16 bit sounds. Trying high quality 8 bit sounds" at offset 94C6B. As the MAIN.exe of the final version does not mention 16 bit sounds, it seems that, at one point, it was intended for the game to have 16 bit sound effects.

Lang0-0.dat appears to contain the same debug and cheat menus the Intel demo and final version have.