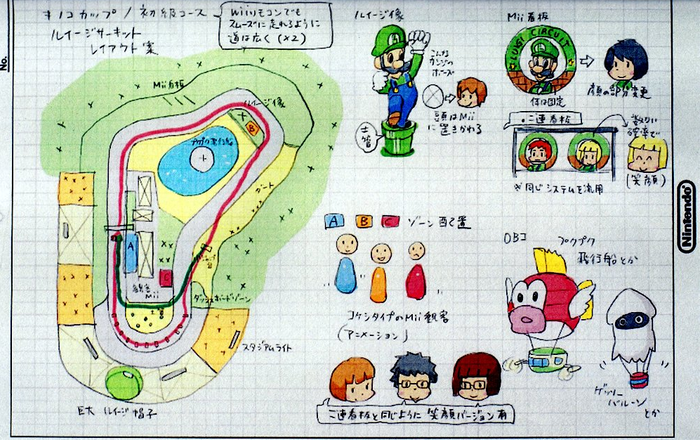 Early Concept Art for Luigi Circuit shows that there was originally a Blooper Blimp as well as a Cheep Cheep Blimp. 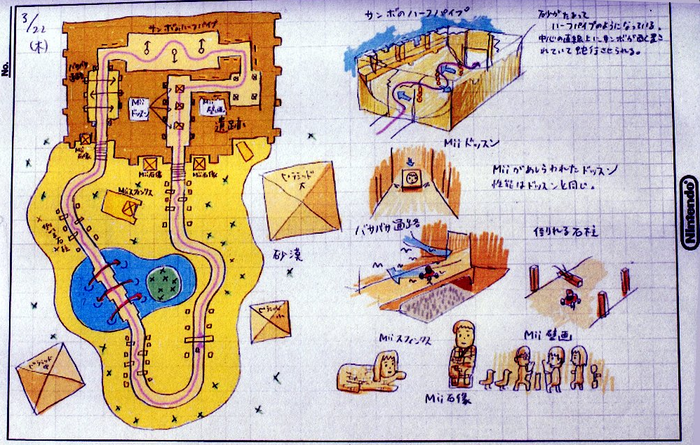 Dry Dry Ruins's Concept Art shows that the track almost completely changed during development. The oasis is much larger in this version, and the ruins themselves have a sort of "Boobytrapped" vibe. Mii Heads were planned to appear on a bunch of objects (The sphynx, mummy statues, wall paintings and some thwomp like object). But in the final game, the only place a Mii could appear was on the sphynx's head. 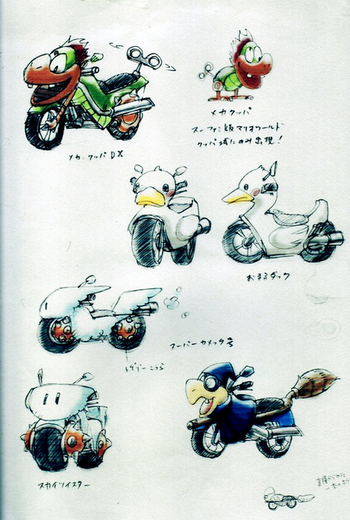 Concept art for several bikes. There are early designs for the スーパーカメック (Sūpā Kameku, translated to Super Kamek) which would end up being the Magikruiser in the final game, and the Quacker. The two scrapped bikes were based off of a MechaKoopa, called the メカクッパ DX (mekakuppa DX, translated to Mechakoopa DX), and a bike based off of Lakitu's cloud known as the スカイツイスター (Sky Twister). 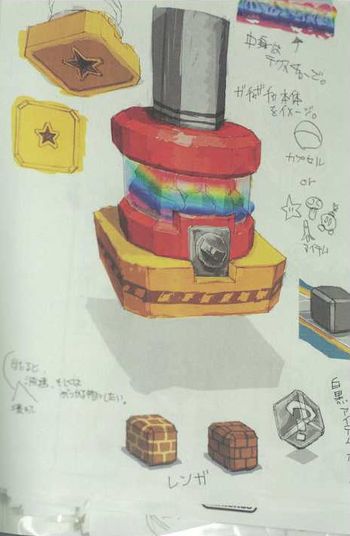 This shows concept art for the pillars that transform bricks into item boxes from Toad's Factory.
Originally, the bottom of the pillar had a 5 point star, instead of 4 like in the final game. In addition, a small yellow structure was added in the final game in the place where the grey pillar and the red cilinder connect. 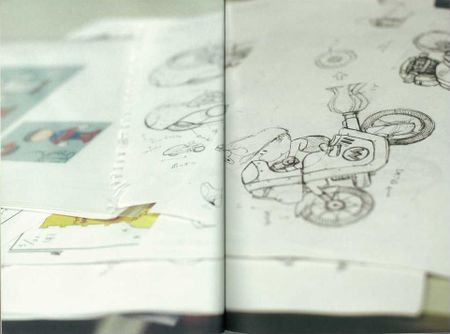 This shows concepts for Baby Mario in the Magikruiser, and the Torpedo bike. On the left, we can see what appears to be a Mii in a racing outfit. While it looks like the Outfit A from the final version, the concept shows the body with 2 colors, red and blue (including red shoes). In the final game, the whole body is of one color (depending on the Mii's favorite color), and the shoes are always grey. 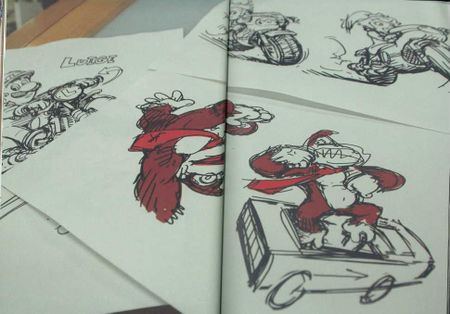 These might have been concepts for some of the 3D artwork renders, featuring Luigi on (what appears to be) the Standard Bike M, Peach on the Mach Bike, and Donkey Kong on a kart (possibly the Flame Flyer).
The front piece where the logo appears on Luigi's Standard Bike M is round in the concept art, but squared in the final game. Donkey Kong's kart looks very rudimentary in the art.

Across different points of time, Nintendo shared various videos showing the Internet capabilities of the Wii, both online in their official websites and also as part of a Wii channel.

At around the end of each video, a few seconds of gameplay are shown, featuring very little differences. In most instances, the "LAP" graphic looks more stretched than in the final game, just like in the GDC 2008 footage. However, this seems to be from a later build, given how the tagname line appears to be just like in the final version (with the end of it being semi-transparent instead of opaque).

These videos also show early versions of the "LAP" graphics for every language the game supports (except for Italian). Just like with the English counterpart, these lap graphics look noticeably more stretched.

These early lap graphics could also be seen in various other TV commercials.[6][7][8][9][10][11][12][13][14] A build containing this early version of the graphic seems to have been sent to videogame journalists shortly before the game's release.[15]

In 2008, the company of Hobo Nikkan Itoi Shinbun (aka Hobonichi) created a webpage dedicated to Mario Kart Wii[16][17], which was sponsored by Nintendo. A few screenshots were exclusively shared in their website, 1101.com.
Judging from the early tagname design and how it isn't color-coded on Team matches, these screenshots may be from a build similar to the one shown at GDC 2008. These screenshots also have the early TIME graphic from that build as well. 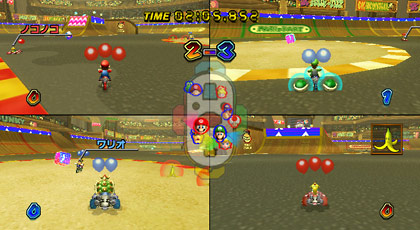 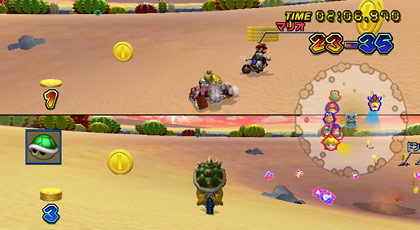 The manual of the game[18] features screenshots with some UI differences not seen anywhere else:

In online modes, in the screen that shows all players found after searching, the game mode wasn't originally printed in the upper left corner. In addition, the Mii icons were positioned slightly higher in the early version.

The course voting screen in online modes didn't show the racing flag model in the background.

Many screenshots in the manual also show how the "Back" button graphic was seemingly thinner.

In the license screen of the Mario Kart Channel, the button on the lower left part of the screen originally said To the Wii Menu instead of simply Wii Menu. The licenses also seem to be positioned slightly closer together.

On the Mario Kart Channel version of the Friends screen, the Mii originally looked darker (similar to how they looked in the license selection screen in GDC 2008). In addition, the "Find a Friend" and "Register a Friend" buttons were originally positioned lower, leaving a big empty space on top of the screen. It's likely this is because the developers removed the "Create Room" button from this version of the menu, but didn't reposition the rest of the buttons yet.

This image shows Mario driving in the GCN Waluigi Stadium competition/tournament. The differences include the lack of score numbers, smaller "SCORE" text and also the fact that the dots that represent the rings position in the minimap look smaller and darker, similar to an earlier screenshot of competition/tournament mode from GDC 2008.

This screenshot shows most of the differences seen in other images of the Ranking menu shared at GDC 2008. Aside of that, the shading of the Miis looks much brighter (similar to how it looked in one of the game's videos).

In this image, a Mii is placed in the coordinates (0,0) (latitude/longitude), which is impossible to achieve in the final game, since there's no region set on the Wii that has such coordinates.
In addition, the bubbles where the friend Miis appear in the upper part of the image seem to have a different design. 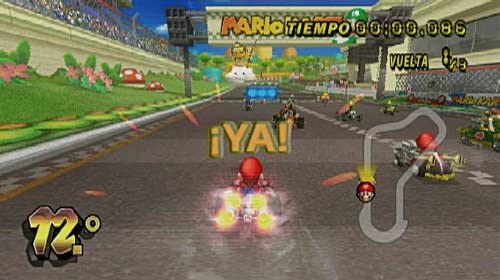 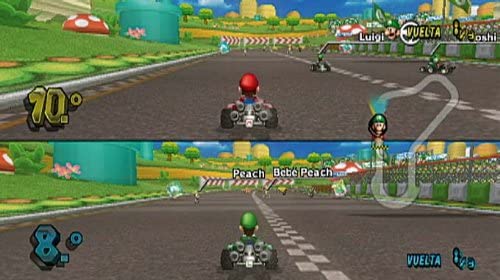 The picture that you receive at the end of the game depicts all the characters standing on a podium on Luigi Circuit, but the track itself has some discrepancies from both the final version and the version seen in the pre-release screenshots and the early banner. For some reason here, the signs have became "Mario Kart" signs instead of Nintendo ones, and the Luigi hat is missing. This particular version of the track can also be seen from another angle in this promo poster.

One of the textures used for reflections (named sh_decoration2.tex0) shows an early version of the part under the second mechanical stairs in the bottom floor:

During ChinaJoy 2018, a digital entertainment conference held in China from August 3rd 2018 until August 6th, a version of Mario Kart Wii in Simplified Chinese was announced for the NVIDIA Shield TV, as part of their HD lineup of Wii and GameCube re-releases.
While a Chinese version of Mario Kart Wii never released on the Wii, several leftovers found in the game (primarily in the Korean version) imply that it was in development.

All Wii NVIDIA Shield games contain a file called game_specific_asset_locations.ini, inside *_assets.pak/ini (where "*" is the game's abbreviation). This file contains the directory where game specific assets are located inside the developer's computer per-game.

At the end of the file, there's the assets location for the NVIDIA Shield TV version of Mario Kart Wii:

Screenshots, videos and other media

It's exactly unknown whether the following sources have prerelease elements (and/or developer interviews) or not.