This is a sub-page of Prerelease:Mario Kart Wii.

The game later debuted at GDC 2008[1], held during the penultimate week of February 2008. While the game was not present in playable form, several screenshots and a few trailers were released during this time, showing a build of the game that was much closer to the finished build.

Although this trailer originates from the Nintendo Media Summit 2008[3] (April 2008), some footage seems to originate from the builds shown at GDC 2008. 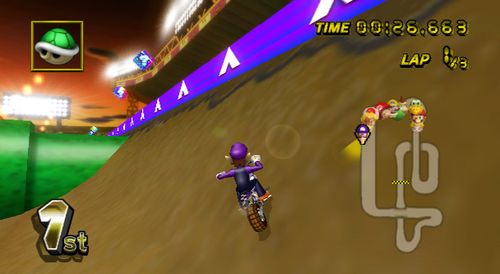 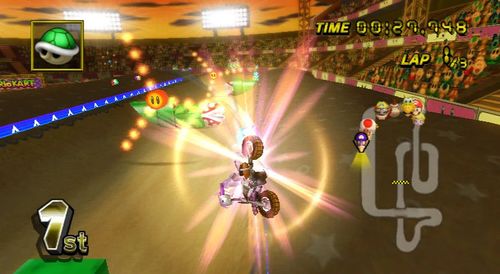 The area with the half pipes and the Piranha Plants originally had sets of 2 item boxes instead of 3.

All footage from this period of time had a slightly different LAP and TIME graphics. They were smaller and a bit more stretched. They were also a bit darker as well.

The position tracker in 4 player splitscreen didn't change colors to match the player (however, the screenshot also shows that the timer and lap count, as well as the item roulette did change color). It also shows that the black bars that divided the screen into 4 used to be layered on top of the minimap, where in the final game the minimap was layered on top of the black bars.

The character icons next to their names (as seen with Luigi in the screenshot above) is a lot bigger, and the lines pointing out other human players aren't color coded, and they remained white for everyone in Team Mode (rather than becoming red/blue to indicate that players team). In fact, these lines use a slightly different, with the end of it being opaque instead of semi-transparent. This texture is actually present (but unused) in the final game files. 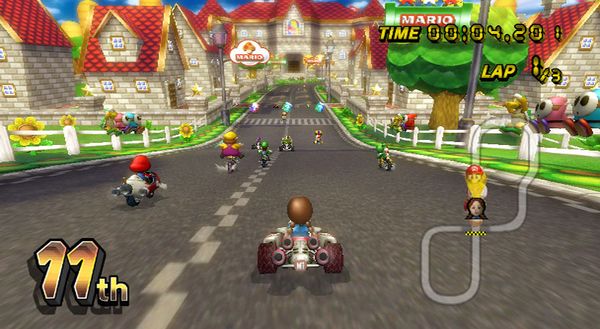 The Mii's icon on the minimap shows that originally it had way darker shading, much like on the license screen (see below). 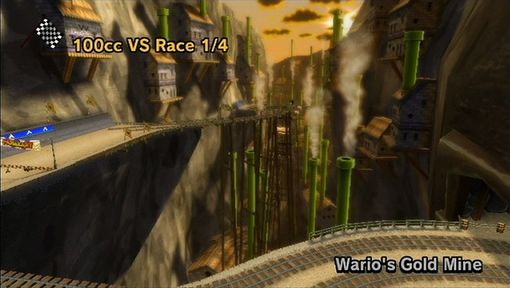 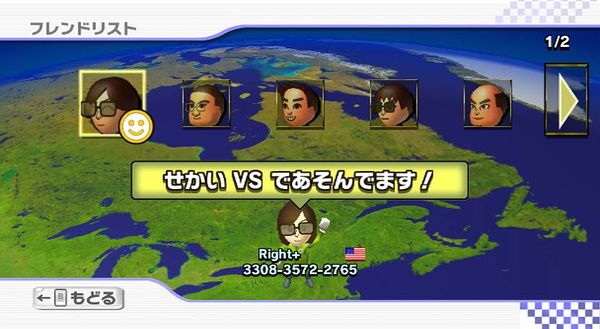 The player in 10th place seems to have an early icon for the Wii Wheel next to his name, which can still be found inside the final game's data.

This screenshot shows an early version of the DK Summit Gates competition:

This is an early version of the SNES Mario Circuit 3 coins competition: