This page details prerelease information and/or media for Normality.

Judging by screenshots seen in magazines, there were at least two extant prototype builds of the game sent out to reviewers: a distinctly early build, and a later build closer to release that was probably built around the same time as the playable demo. They can be clearly distinguished by a few small details, such as the kitchen in Kent's apartment: the early build has an orange kettle, and the later build has the gray one that's also in the retail version.

Both of these prerelease builds sent to reviewers appear to be fully lost.

Early gameplay footage from Normality was featured in a segment on 90s UK TV show, Bad Influence (series 4, episode 6) with Violet Berlin. The game is referred to by its working title: "Normality, Inc." In the footage, all the NPCs are shown as temporary "Bernard" placeholder sprites.

Normality: The Official Strategy Guide (ISBN 0-76-150493-1) by Jeff Sengstack includes quite a lot of background material from the developers themselves.

Chris Russell's original design for the "Voodoo Doll" interface is described as "...a giant eyeball on a hydraulic neck attached to a huge pair of lips which were in turn attached to a giant foot. The various limbs popped out of their sockets every now and then."

Sengstack's book discusses an early draft of the game's design, in which it would have been revealed that Paul Nystalux has been keeping Neutropolis under permanent cloud cover by spreading a chemical called Precipitaz in the air every morning from a small aircraft called a Skimmer. To defeat him, Kent needs to help Heather develop a chemical compound called Blue 'N Fluffy that can reverse the effects of Precipitaz. The ingredients for Blue 'N Fluffy include a Walnut Whip, cotton wool from an otter's den, and "Ingredient Z", which turns out to be the "Z" from a road hazard sign.

(Remnants of this can be found in the final game: there is a Walnut Whip hidden in the rebels' fortified fridge, an otter swimming around near the docking area, and a road hazard sign on the wall in Heather's laboratory.)

In the game's finale, Kent would climb up the outside of the Ordinary Outpost using the Sharkpoon, hijack the Skimmer, and use it to spread Blue 'N Fluffy across the city. In response, the Norm airforce is deployed, triggering a final mini-game: a dogfight above Neutropolis.

Various other parts of the game were also originally going to be different:

Kent's Mission at the Mall

Heather and the Sewers

Several gaming magazines included the following promotional image, which appears to be concept artwork from an earlier period of development. The following image is a scan of it from PC Mania 43 (May 1996), which has the clearest print of it. 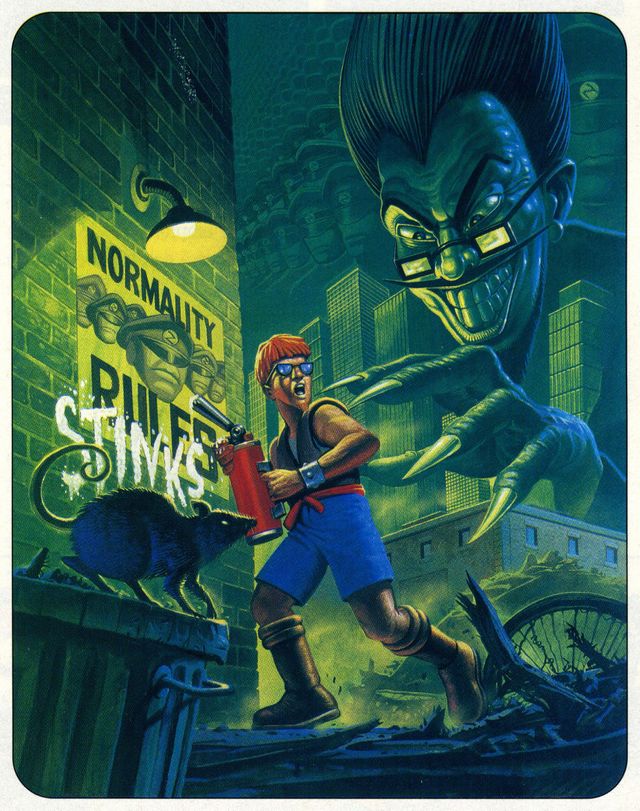 "Normality Stinks", featuring Kent, Paul Nystalux, the Norm Troopers and a fire extinguisher. And, who knows, maybe it's that same rat Kent that has in his washing machine.

There are a couple of interesting differences to note here:

The old Paul Nystalux design actually did end up being used for the final game, specifically for the European retail release artwork: The old design for the Norms and Paul Nystalux, complete with claw, on the UK retail disc cover.

In the same month of the game's release, a full walkthrough was written by someone named Lucio Burroni (as signed at the bottom of the file). Curiously, this walkthrough appears to be written for the unreleased later prerelease version of the game, as a number of details are different from retail. The game is also still called "Normality Inc" at the top of the file. Because of this, and because the walkthrough was written in the same month as the game's release (1996-06-12), it might be an officially sanctioned one created to help players along, although the author's name doesn't appear in the game's credits anywhere. This walkthrough was distributed by some gaming magazines, such as on the PC Gamer #34 (1996-09).

Either way, the details that differ from the retail version of the game are quite interesting. Here's a breakdown.

The Can of Food still exists in this version. In the retail version, it has been removed. It's unknown if this walkthrough's build of the game had the can on the chest of drawers, or if it was in the fridge as in the demo version. Note that the walkthrough never actually uses the can—apparently it was meant to be used at the TV Station, but by the time this walkthrough was written it no longer seems to have any use.

In the retail version of the game, the secretary no longer has the name "pru", although internally her texture still does have that name.

When you first arrive at the rebel hideout, Heather pretends there's an army of revolutionaries ready to kill Kent if he doesn't answer to her liking. Apparently, in the walkthrough build, there was supposed to be a background sound effect to help give that impression. In the retail version, you can only vaguely see some armed men in the background, which turn out to be cardboard cutouts once the lights get turned on.

Although the game loves to throw Kent around, it never happens at the TV Station. Walking up to the guard only causes him to berate you.

In the retail version of the game, this section doesn't quite have a hint like this that you can get by observing the computer. For one thing, you can't actually see or hear the presenters while you're in the control room—and you can't see anything in the control room from the balcony behind the other door. You also can't tell what exactly is in VT A—just that there's already a tape in there.

This version does make a lot more sense when you read the unused text that was meant for the TV hosts to read on air: they clearly introduce what they believe to be a tape about the fateful day that Saul died, right before instead the Brian Deluge tape is played. In the retail version, they instead introduce your tape as though it's written on their cue cards, even though you never do anything to make that happen.

This might simply be somewhat inaccurately written down by the author, but in the retail version of the game the books you steal from the locker actually appear as two separate items in your inventory. You can't try to give away both of them and then keep one—you can only give away the costume book.

In retail, you simply grab the small gliders from the bin—you don't have to use the fruit croppers on it. Also, you fly the fruit croppers out of the shop using the large glider itself, rather than the sign. The game still has an unused audio file describing the sign:

A very minor point, but you never pick up the speakers in the retail version of the game: they automatically appear in your inventory once you cut it down.

Also, the walkthrough very intentionally calls them the "plum speakers" twice, but this name is never seen anywhere in the game's text, used or otherwise.

In retail, you can just use the match anywhere. You don't have to specifically click Kent's photograph.

In retail, it's never stated that he has confusing new thoughts—just that he "feels weird". The game includes an unused voice line, however, in which he does very clearly state he's having "thoughts he can't control":

There's only a few very small differences in this section.

Again, this might just be a small error in writing down the guide, but the code isn't on the desk. The code is actually right behind him, on the wall, blocked by his person before he leaves. You actually can't even approach the desk very closely in the retail version.

On a minor note, this walkthrough does not mention the more obvious solutions to the puzzles on the research floor: there's a scalpel nearby that you can use to cut the patient loose, and instead of using the snot covered glass there's a cleaning rag right next to the fire extinguisher that you can use to remove your fingerprints. It's possible these might have been added later.

If you destroy the evidence against you, Paul will actually realize that you're not Norm 2782, but Kent Knutson in disguise.

In retail, the cistern doesn't have a lid to open. The transmitter is visible right off the bat.

The way this is written implies that the TV salesman will come back out of the storeroom if you don't lock him in there with the keys. In retail, you can lock him in, but it doesn't make a difference—he never comes back out again once he leaves, and you don't need to do it in order to climb up into the attic.

There's an unused line indicating he would eventually come back out:

The section on solving the power substation puzzle actually contains a very developer like reference stating that this is "temporary" and "not done yet".

"1 2 3 enter" also seems like quite an unfinished puzzle solution. In the retail version of the game, the puzzle doesn't require inputting anything into a keypad. There is a small text display with a big conspicuous button right above the control box, though—it says "PRESS" at first, and then "START" after you short-circuit the circuit board and connect the large coil of wire, but pressing the button never does anything. There's also a secondary control box, but it can't be opened.

The puzzle in which you have to rescue Dai is somewhat different.

As also referenced in unused lines and the fact that there are two different pipe inventory objects, it seems you were originally supposed to also connect a pipe inside your apartment. In fact, in the retail version of the game you don't even need to have the sharkpoon removed from your bathtub for the puzzle to work. Another small detail to note is that you can just get the pipe from the wreckage of the TV shop instead of the mall.

This reference relates to an unused texture (of the hole at the top of the container) and its corresponding voice lines. In retail, you can only blow open the container using the torch, and the hole no longer opens up (in fact, the rusty patch is not interactive at all).

On a minor note, the walkthrough also tells you to get rope from the M.I.N.T. Mall. Many prerelease screenshots, up to final release, show there being a coil of rope in the docks at Heather's Den, but it's possible that both options worked or that the rope at the docks was already removed from the game at this point.

In retail, there's a loose brick you need to put into the gap before you can reach the batteries.

The walkthrough also states you should speak to your friends and grab the goggles before it tells you to turn the lights off in the tunnel to scare away the guards. Again this is something that may have just been a small error by the author, but in retail you can't get into the stadium until you turn the lights off, necessitating that to be done first.