Normality is a first-person 3D point & click adventure game about a grungy Generation X loser called Kent Knutson and his rebellious adventures in the fictional totalitarian city-state of Neutropolis.

Type wendy during gameplay to activate the following debugging features:

The main executable file also has the following command-line switches:

The demo version had a bunch more.

Some unused content can be seen by abusing the level select code mentioned above.

There are three links to Heather's rebel base: 3 = Den, 4 = Docks, 8 = Heather Den. Picking the first one has Heather and Saul in a state where their dialogue is broken and just shows "JUNK" as subtitles, and having speech turned on at this point will softlock the game. However, the dialogue options seem to be references to the cut Blue 'N Fluffy quest:

The "Skimmer" noted in the dialogue was originally going to be a small aircraft launched from the Ordinary Outpost each day that spreads a chemical formula keeping the population stupefied. "Ingredient Z" is one of the ingredients for making the Blue 'N Fluffy needed to combat it, which was actually going to be the Z from the road sign in the base.

None of the actual dialogue is preserved, with all options just leading to more "JUNK" subtitles.

Raft in the Rebel Base

To destroy the Ordinary Outpost, Kent collects a bunch of stuff and then brings it over to Heather's den by raft. After successfully shipping over the items, the game will automatically show the missile cutscene and then bring you over to the Stadium, after which you can't go back.

However, using the level select cheat to go back to the den, we can see that the raft is actually there and can be interacted with: 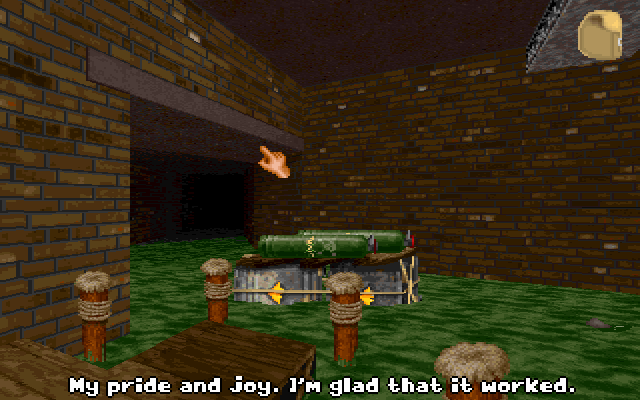 Interestingly, even though Heather originally says she needs a detonator for the missile, it's actually optional to collect the firecracker from the M.I.N.T. Mall. It's possible that this was once mandatory, necessitating a state where the raft is already moored at the docks while Kent still needs to return to deliver the firecracker.

When traveling to the Den via level select 8, you'll end up in the version of the Den from before you're allowed to freely roam around. You always immediately speak to Heather while you're here and normally you're teleported right back to the Factory after the conversation ends, but when using the level select cheat you don't get teleported. You can look around the level, but there's very little to do (nothing is interactive except for Heather). Interestingly, the hallway looks different in this version of the level and is sealed off. Presumably it's an older version.

After firing the rocket at the Ordinary Outpost, the sky turns blue again and the sun comes out. The only place where we normally see the blue sky is one single scene at the Factory after the missile was launched, and then at the Stadium. From the Stadium you can no longer go back to any of the previous locations.

As it turns out, nearly all levels actually have the ability to display the blue sky:

It's possible that the game might have originally allowed you to go back to these locations. The only maps that don't have a blue sky in their textures list are the ones that you'd certainly never be able to return to after that point in the game (the Ordinary Outpost, the Cells, Dai's Cradle, and the TV Shop Loft). You also can't see a blue sky in Street and M.I.N.T. Mall in their early game versions before they're blown up.

In save files, the variable that controls whether the sky is blue or green is located 294 bytes from the end, and should be 0x06 for green and 0x08 for blue. (This value does get occasionally set to a different value as the storyline progresses.)

Speaking of the Stadium, the map actually has an entry for traveling to it, which is also activated when doing the above. Normally it's not possible to see, since you enter the Stadium automatically and you can't leave it once you're there.

It's in the top right part of the map: 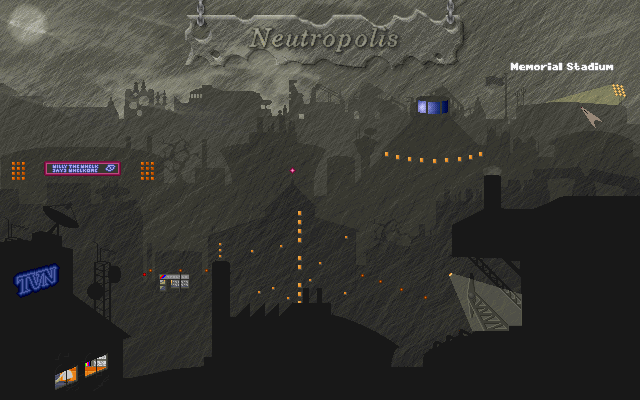 It's fully functional, but once you arrive at the Stadium you can't leave anymore, just like normal.

Can of Yellow Paint

"Hmm. The lock is rusted shut."

One unused sprite is what appears to be a 2D cartoon version of Brian Deluge holding a CD.

Curiously, it uses black outlines which is a noticeably different style from all other 2D art in the game. 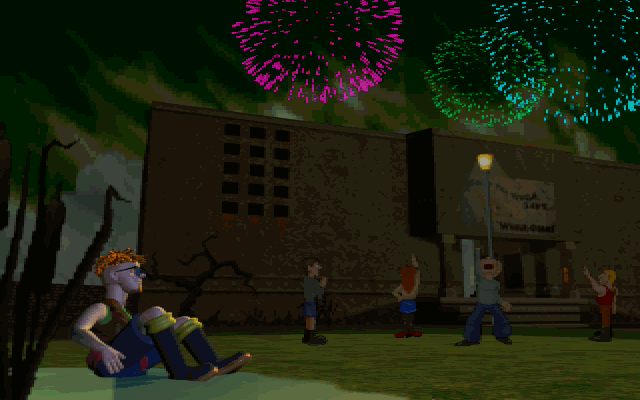 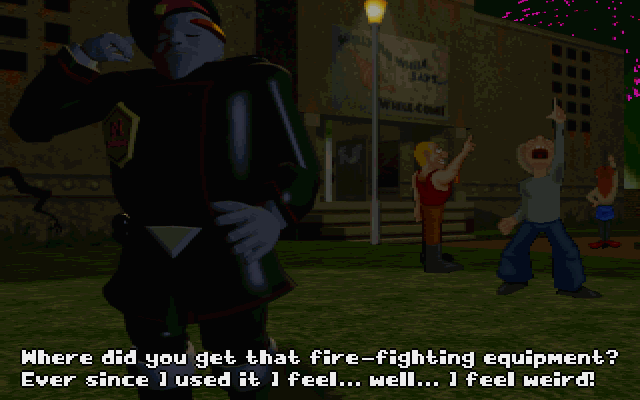 When the M.I.N.T. Mall explodes, there are several people in the background drawn in the same style as Bernard. These are possibly from an earlier iteration, before the switch to fully 3D animated characters were made, and then used in this cutscene as a time saving measure. No other scene in the game has this style of characters.

A music file named EDITSCRN.HMP never seems to be used in the game.

Given the name, this might have been used for development purposes. The demo release contains two additional unused tracks which are no longer present in the retail release.

A generic TV News-style jingle, with a male announcer speaking: "Welcome to Normality Today. My name's John Spender, and I'll be with you for the next hour."

Internally file is named TEST3 and has the description "TV announcer".

There's also two alternate versions of this jingle: one without announcer voice, internally named TV and described as "TV noise"...

...and another that's just the jingle, named JINGLE2 and described as "hosp jingle".

The description "hosp jingle" indicates it was possibly meant to be heard in the Hospitality Niche at the Plush-Rest Factory.

In both U.K. and U.S. versions, the Norm Trooper at the M.I.N.T. Mall will give you a "Friend of Paul" badge when you ask him about the fire extinguisher.

However, he also gives you a badge at three other times in the U.S. version, but not the U.K. version:

The U.S. version replaced Kent's original voice actor, Tom Hill, with Corey Feldman. Compared to the U.K. release, Kent's lines have a lot of minor differences due to Americanized spellings and slightly different line readings, but there are also some changes that show additional writing.

Here are some examples; these use the UK version as the baseline, with the US version adding the underscored parts and removing the strikeout parts: 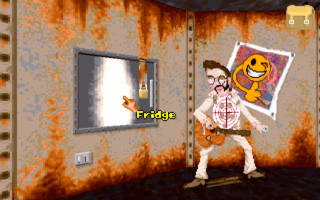 In the Rebels' Hideout, there is a mysterious padlocked fridge, set into the wall. It is possible to open this fridge – you will need a hammer from the wall near Heather, and a blue box that you can find by investigating the flashing traffic bollard out in the hideout's docking area – but it's useless to do so. Kent refuses to take any of the items inside, and the game carries on whether you open it or not. 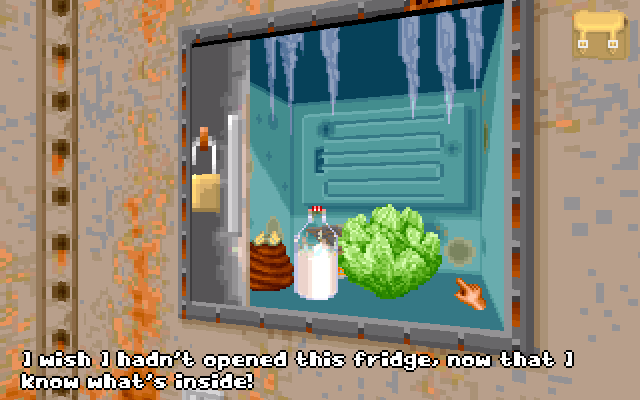 However, it seems the contents of this fridge – in particular the Walnut Whip (or Walnut Cone as the game calls it) – played a more crucial role in early iterations of the game's design.

Also, unused textures indicate this was once a full-sized, freestanding fridge, complete with graffiti and bullet hole: