Proto:Barkley, Shut Up And Jam: Gaiden

This page details one or more prototype versions of Barkley, Shut Up And Jam: Gaiden.

Warning: The prototype wiki article you are about to read is canon.

A prototype of Barkley, Shut Up And Jam: Gaiden was released, along with the Vidcon Pack, by Tales of Game's on December 13th, 2012.

Easily the biggest change between the prototype and the final game is that the prototype runs on the RPG Maker 2003 engine, instead of the Game Maker engine that the final uses. Because of this, a few things were not able to be added to the game (or look/act different):

The main story is present in the prototype, although there are a few exclusions. When a new game is started, however, it begins in the B-ball Dimension with Barkley, Vinceborg, and Zalatar, the turkey living in Cesspool X (more info below).

Two noteworthy characters were removed in the final game; one that was used for debugging, and another that's... odd, to say the least.

The turkey from Cesspool X can be played in the prototype. However, he's a debug character with extraordinarily high stats and a 100% critical hit chance. Several things are noteworthy about Zalatar;

A rather strange character, gope is essentially the same as the seven blank RPG Maker 2003 hero assets in-game, but with a name and (blank) overworld sprites. It's possible that this was a developer joke.

All additions, changes, and removals are bolded.

When the generic announcer was changed to Dick Vitale, the only line spoken was edited to sound more like him.

Because of the addition of the Desolate B-Ball Court, and the changing of the death of Vinceborg, this bit of text was removed.

The sprites for Barkley and Shadow Barkley were slimmed down and given less amateurish shading in the final.

Balthios' sprite in the prototype has a lot less detail. The sprite for the Ultimate Hellbane wasn't changed, though.

Hoopz Barkley's portrait was changed to Eddie "Skate" Hunter from the Streets of Rage series, namely his mugshot from the international versions of Streets of Rage 3, while his overworld sprite was redone to make him look more like a teenager.

Ghost Dad's battle sprite is completely different in the prototype!

Every skill that the playable characters use in the prototype had changes in some way, ranging from BP consumption to entirely different effects.

Four alternate versions of Cuchulainn's Tomb's music (Islam is the party religion) are in the files of the prototype!

This song appears in the earlier versions of the final, but it was later replaced with "falling down". 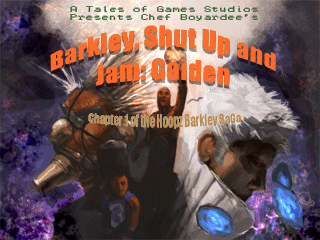 An unused variant of the title exists in the files. The only thing different from the one used is a missing apostrophe in "Game's".

Cyberdwarf has three unused portraits, all of which show more of his hair. The first portrait has lighter colors than the other two, while the third one adds a border and some 'pupils' to his eyes. There is a fourth unused portrait, which is just the final one that has been moved down a pixel by accident.

The map that holds all of the maps for Proto Neo New York and Liberty Island has this lovely message for CBoyardee.