This page details one or more prototype versions of Disney's Stitch: Experiment 626.

A preview build with a date of March 28 2002, just over a month older than the final build. It became available online in November 2019.

Instead of being divided into worlds, the level groups have titles:

During gameplay, the text "High Voltage Software Stitch On The Loose - Beta:Mar 28 2002" is superimposed on the screen. 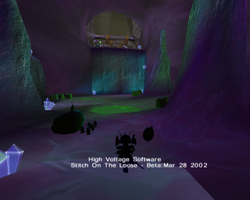 Notably there is no mention of reels collected or the total DNA collected. Also in the prototype, the teleporter light turns red when it is entered. 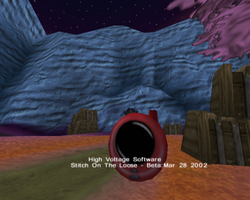 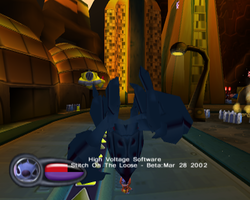 The intro video uses different voice clips and is shorter than the final version.

The loading screens consist of a still image of the game's logo. On some occasions, a cinematic of Stitch will also play.

The cutscenes are animation sketches and all have content differences.

In the same way as the final build, if the game is left at the title screen for several seconds, a demo video will play. In this version, there is only one video unlike the three in the final game and the footage is different. It is a short gameplay video of the "Greema Jungle" level, from a noticeably earlier build than this one due to the different font in the HUD, non-functioning intercom and other signs of being less polished.

Some of the glass tubes in the beginning of the level are broken at the top, causing eggs to jump out of them. 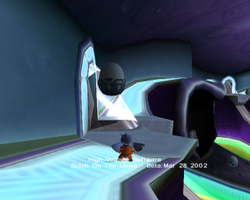 The acid is more clear than in the final game.

The stage uses one of the pink jump pads instead of the custom one from the final game. It is also further back than the final one.

Two of the buildings have fire escape stairs. They can be walked on and contain DNA and spawning enemies. 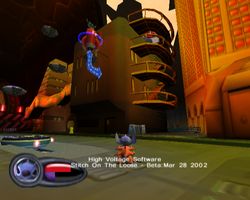 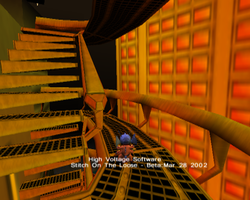 There is a short in-game cutscene showing one of the police ships falling and crashing through the glass floor in the first stage of the level. This event happens in the final game but not as a cutscene, and instead occurs during gameplay where it is hard to notice unless the player doesn't move after reaching the checkpoint.

At the beginning of the level, soldiers spawn on the ground instead of just the ledges. Some boxes were moved further to the edge in the final game. These changes most likely took place due to the destruction of floor later on, which in the prototype makes the soldiers and boxes float above the giant fan.

In the tall room in the last part of the level, one of the ledges has a black square on its wall. It doesn't have any function, although several frogbots behave oddly in this part of the level, including one which approaches the square then disappears. 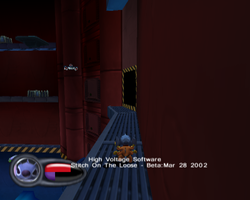 Two of the pipes at the beginning of the level are attached to the wall, while in the final game they are separated.

An intercom is present where Jumba tells the player to destroy a power generator just before the area with the giant glass tube. This is further evidence along with an unused object in the final game and a pre-release trailer that at some point in development there would have been a giant machine that the player would have had to destroy within the glass tube. The dialogue is in the files of the final game but unused. 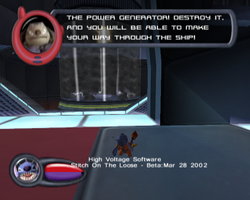 One of the types of destructible objects that appear have different handle shapes.

Most levels have completely different music. Like in the final game, all non-boss levels have two music variations. The title screen uses the same music as the final game and there is no music for the level select.

The levels "Got Gas?", "Habbitrales to You", "Meet the 700s", "Energy Lines" and "Welcome Aboard!" have the same music as the final game.

In the same folder as the memory card icon is another icon titled FISH.ICO. The model is an animated fish.