From The Cutting Room Floor
< Proto:Gran Turismo 5
Jump to navigation Jump to search

This is a sub-page of Proto:Gran Turismo 5. 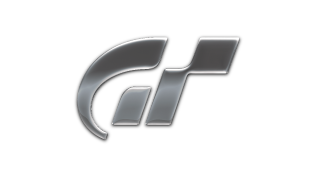 GT5 Demo 2010 is an early build that was compiled on July 16, 2010. This build of the game was released on the Internet Archive, as part of a PS3 IDU update disc, as early back as October 13, 2018, but the build would remain encrypted until August 8, 2019, where Internet aliases Razerman and Elston87 decrypted the encrypted package that contained the build. The build was later re-packaged and re-released the following day.

This build of the game was not publicly distributed. It was only available for play via trade shows and public events, displays and kiosks that showcased the build and the developers' then-current progress of the full game. From the compile date, this build predates the final release-to-manufacturing build of the game by around four months.

Because of how PS3 games are normally distributed and executed, this build has details worth noting that deviate from the norm:

Digital-only PS3 games are distributed and installed on consoles via package files. This build is contained in a package file inside its IDU disc, intended for kiosk consoles running a special firmware. Normally, package files can be installed on any console, regardless of whether or not the console can actually execute the software that was installed, an example being homebrew. However, this build's package file is a special case.

The PS3 IDU disc contains a firmware update, as all IDU discs do; they included a firmware update alongside game software and other multimedia content intended for kiosk/display-only consoles. For most IDU discs, this content is distributed via a system software backup that is included on the disc that the console wipes its HDD and restores the backup of the contents of from the disc, essentially a "bare-metal install" for each and every new IDU disc (if used as intended). However, this disc contains the game software as a package file, which is different from the normal distribution method on these discs.

Razerman has written some code that explains the entire process and how it functions.

The Top Menu in this build mostly resembles the final game's Top Menu, with a few differences: 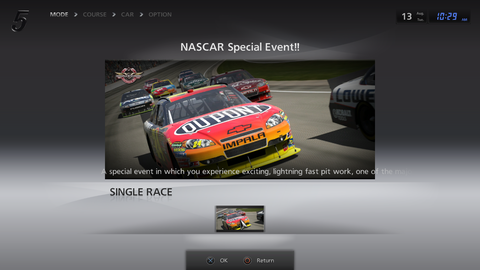 By hacking the build's save data, Special Events can be unlocked in Arcade Mode. There is a single playable special event that is a three lap single race around Indy Speedway with a few differences. A brief description of the event is below:

The first four cars in the grid take off immediately, while the other four cars of the total eight car grid remain parked on the final turn of the course, including the player's car who is in fifth place in the grid. After around 30 seconds have passed, the last four cars then start driving, with the player remaining in auto-drive, driving inside into pit lane. The camera is locked to interior cam, and once the player's car is parked inside pit lane, the camera changes to a different angle inside the car's interior while the pit crew goes to work; the animated sequence that plays out here was later reused for one of the expert level challenges of the Jeff Gordon NASCAR School Special Event in the final version of the game.

After pit work is complete, the player's car then auto-drives out of pit lane and the player finally gains control of their vehicle, as well as the ability to change their camera view, dropping the player all the way down to eighth place. Before making their second lap, the leading four cars in the grid make a pit stop, allowing the player to move up to fourth place, but the leading three cars are still a good 30 seconds ahead, meaning that the player can only finish the race with a top place of fourth. 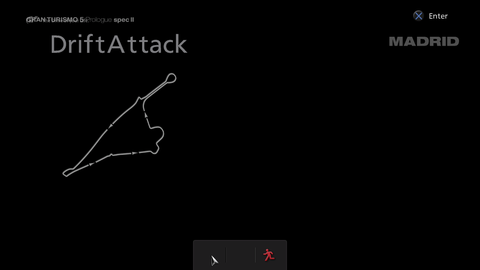 By hacking the build's save data, Drift Trial can be unlocked in Arcade Mode. However, the functions needed for this mode of play to work are missing in this build. The game will load what is essentially a mockup of the mode selection pre-race screen from Gran Turismo 5 Prologue; the course map even changes depending on what course is selected, as all courses present in this build have the appropriate assets (which themselves are also still stylized like they were meant for GT5P as well). The game will soft-lock once this screen loads, and the game will have to be reset at this point.

As with the previous two modes of play, hacking the build's save data can enable "2P Battle" in Arcade Mode, but it is broken in this build. While the screen does properly split in two, and controller inputs are properly separated as well, Driving Options do not display after each player selects their vehicle and are invisible, but still configurable. After the players confirm their vehicle selection and Driving Options and finishes loading, the game then causes a fault in the RSX GPU of the PS3; the display will stop updating, but the game will still be running in the background otherwise. This happens because the graphics code required to render two-player split-screen has not been implemented yet. Pressing the PS Button to access the XMB will cause the game and thus the system to crash, requiring a hard reset at this point.

Only nine of the 72 total vehicles present in this build are available to select from:

This leaves a number of vehicles normally unplayable, 63 to be exact. Some of these vehicles appear as AI opponents in Single Race:

Five of these 72 vehicles do not appear anywhere in Arcade Mode at all, but data for them is still present in the game:

These vehicles are actually Tuned variants of cars that were featured in Gran Turismo 5 Prologue. These Tuned variants did not carry over to the final version of the game, but they can be found here carried over into this build.

Of note is the Tony Stewart's car in this build carries a different livery, an all-red combination with Old Spice as the primary (hood) sponsor and Office Depot as the associate (side) sponsor. The final version uses a red and black livery with both sponsors switching positions. Additionally, all NASCAR cars have the Coors Light Pole Award stickers unblurred.

Only five of the ten total courses present in this build are available to select from:

Five other courses can be found in the game's data files which are not normally playable without the use of hacking and/or modifications:

This build of the game contains what is essentially an earlier version of the Toscana course. This rendition of the course mostly resembles the final game's rendition with a few differences.

There's not much dynamic scenery, such as spectators on the sidelines, and there is signficiantly lesser barriers and trees on the course itself, allowing for a lot of runoff room for vehicles driving the course; more barriers were added in the final rendition of the course to prevent players from veering their vehicle too deep into some corners of the course and thus intercepting some scenery (such as the hay bales) that doesn't have any collision. The time of day cannot be adjusted in this build of the game yet, but the course quickly transitions from afternoon to night rather quickly, possibly to demonstrate the new time lapse feature of the game.

Most of the course thumbnail assets that are in this build are the same as those in the final, but some are different while others are outright missing, such as those for Trial Mountain.

The assets used in this build of the game are shots of the PS2 rendition ported forward to PS3 hardware. These were used as placeholders until the final updated course was finished and thus new assets were produced.

Another course which uses its PS2 rendition ported forward to PS3 hardware as placeholder assets until the final updated version was finished.

Only the 1st thumbnail is different in this build. The asset here in this build uses a slightly different angle than the final's asset. Otherwise it is the same course.

The asset here in this build uses a slightly different angle than the final's asset. Otherwise it is the same course.

Both assets for the 1st thumbnail depict the exact same camera angle in the shots, but the asset in this build depicts the PS2 rendition ported forward to PS3 hardware, used as placeholders until the final updated version was finished.

Rome Circuit was in the final stages of completion in this build, as the assets here depict the differences, such as different textures on the coliseum and columns, and some scenery objects have not been added yet. Also, in the 2nd thumbnail, the curbing is a different color.

The assets in this build depict the earlier rendition used in Gran Turismo 5 Prologue before it was updated for the final build. The course is the same, just that some trackside banners and other billboards were updated to resemble the then-current rendition of the course in 2010.

Same case above as Suzuka Circuit, though the assets in this build depict different shots.

Only the 1st thumbnail is different in this build. There are noticeable differences such as darker lighting and different graphics on the starting post. The 2nd thumbnail is identical between this build and the final.