Gran Turismo 5 Prologue takes on the same formula as Gran Turismo 4 Prologue, offering players a glimpse of Polyphony Digital's then-recent developments for the franchise. Despite often being criticized as "a $40 demo", the game went on to move five million units worldwide.

Over two years after the game's launch, it was reported that a user on Twitter found a hidden input code to reveal a "Secret" section in the Options menu. This menu allows for various aspects of the game to be adjusted, such as unlocking all (or limiting) cars or courses available, setting time limits, and other features. It was most-likely intended for in-store displays and public kiosks, given the available options. 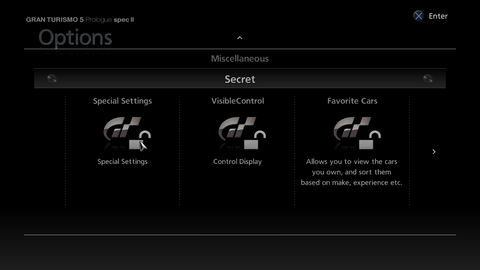 Below is a brief summary of the available features of the Secret Settings.

These settings primarily consist of limiting the player's time and selection of content within the game, such as setting a time limit per race, toggling limits of playable cars, courses, and opponents, and setting a idle timer to return to the main screen if left idle for too long. Setting Kiosk Mode to On without toggling any of the other limiting settings will unlock all cars, and will change the Garage icon on the My Page screen to Showroom.

The Favorite Tuners setting simply changes the GT logo that appears when transitioning between screens to the selected manufacturer's logo or badge.

Toggles the display of available icons to select from on the My Page screen. It is possible to lock the player out of the Options menu or game modes with this, and if that happens, the save data will need to be deleted and a new save must be created to restore the original settings.

Limits the selection of available cars for the player to choose from. The settings here will only take effect when both Kiosk Mode and Favorite Cars are set to On from the Special Settings menu.

What appears to be a duplicate with the same title appears next to it, but has a description of "INFO;FavoriteDemoCar", which is probably the internal name of the intended description. Same as above, except it limits the cars that appear in the background of My Page and in Demonstrations. The settings here will only take effect when both Kiosk Mode and Favorite Demo Cars are set to On from the Special Settings menu.

Just like the two menus above, this one is identical, but instead limits the opponents that will appear in Arcade's Single Races. These settings will only apply when Favorite Rival Cars is set to On from the Special Settings menu.

Similar in function to the last three menus, this one limits the selection of available courses in Arcade and 2P Battle modes. These settings will only apply when Course Limit is set to On from the Special Settings menu.

It is unknown what these options do, as none of them seem to do anything or function like they're intended to. There is a text entry box for "Special setting values" and three Update buttons for News, Gran Turismo TV, and Museum.

There exists some data and references for cars that are unused in the game. It is worth noting that car thumbnails can be distinguished from early builds (including the Free Trial Version (Taikenban) build) and the final retail release versions of the game with their reflections; thumbnails from early builds have the reflections fading out at the bottom of the image, whereas the final version has the thumbnails with no fade effect.

Data and graphics for cars that were featured in the Free Trial Version (Taikenban) build of the game can be found.

The veiled cars from the Free Trial Version (Taikenban) build of the game are still present, including thumbnails in the data and name entries. Both the "gtr_07_veil" and the "impreza_wrx_sti_07_veil" can be found listed as "Coming Soon" as their name entries.

In the final retail release versions of the game, the then-current model of the Mitsubishi Lancer Evolution that was featured was the Mitsubishi Lancer Evolution X GSR Premium Package '07, in which has an internal name of "lancer_evo10_gsr_premium_07". This entry is an earlier model of the car that was present in the Free Trial Version (Taikenban) build of the game before the Premium Package model took its place. Its thumbnail still exists as a leftover.

A thumbnail for the Suzuki SWIFT Sport '05 can be found in the game's files. Curiously, there is a Suzuki Swift featured in this game, the Suzuki SWIFT Sport '07, but the older 2005 model skipped this game and was not officially added until the next installment for some odd reason; perhaps the developers wanted to include as many recent year models as possible for the Prologue.

Yet another car that didn't officially make its appearance in the Prologue (until Gran Turismo 5) can be found in the game's files: The Nissan SKYLINE GT-R V・spec (R33) '97. This car can be seen in some pre-release screenshots of the game, but was never added to the game's roster of playable cars.

Yet another car that skipped making its official appearance in this game: The Nissan XANAVI NISMO Z '06. Interestingly, a thumbnail for this car can also be found in Gran Turismo HD Concept, where it also didn't make an appearance there as well.

Peugeot was one of the manufacturers that was supposed to appear in the Prologue entry, but ultimately did not for unknown reasons. The North American press release for the game indicated that the brand and the cars associated with it were set to make an appearance, but this was changed with the release of the European press release, in which these two cars were removed from the list. Entries and graphics for the brand and two cars, the Peugeot 207 GTi '07 and the Peugeot 307 CC Premium AVN '04 can be found within the game's files. These cars would not make their first official appearance until Gran Turismo 5, but data for these cars can be found as early back as this game.

As with the above, the tuner brand RE Amemiya along with their tuned Mazda RX-7, the RE Amemiya FD3S RX-7 was also set to make an appearance in the Prologue as indicated by the North American press release, but the European press release changed the fate of this car showing up. A graphic for the brand along with the name entry and thumbnail for the car can be found in the game's data files.

For this game, the "_t" suffix within a car's internal name indicates that it is a Tuned model. There are several of these Tuned models featured in the game, but a playable Tuned model does not exist for the Lexus IS F '07. While the car went on to have a model with Race Modifications in Gran Turismo 5, a thumbnail and name entry can be found for a Lexus IS F /Tuned, indicating that there was a playable tuned model implemented at some point, but was never officially added to the game. It has an internal name of "is_f_07_t" and is available in the same colors that the Lexus IS F '07 is available in.

What's interesting to note is that these unused variants were named in the official North American press release for the game, but were removed from the official European press release. The thumbnails hardly having any differences from the normal model of the car would indicate that these cars didn't make it very far in the production stage, but like the Lexus IS F above, the Mazda RX-7 would eventually go on to have a model with Race Modifications in Gran Turismo 5.

While the Ferrari F2007 did make its appearance in this game with the Spec II version/update, it would appear as if there were separate models planned that were affiliated with their driver (such as having the driver's name somewhere on the car). Also, another model exists with the "_bc" suffix, with visible Marlboro barcodes in the rear wing and engine cover; this version was used in a special version of the game installed on Ferrari hospitality suites during selected Formula One races. 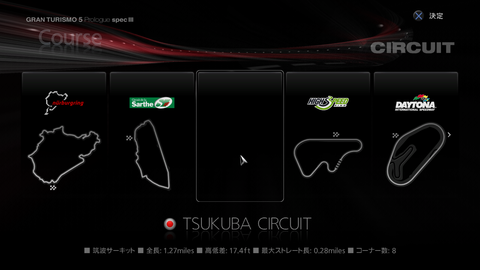 In the Spec III version of the game, if one were to go into the Special Settings above and set Course Limit to Off (On by default), then three (incomplete) courses (four layouts total) will appear at the Track Select screen for both Arcade and 2P Battle modes. These are Nürburgring, Circuit de la Sarthe 2005 (with Circuit de la Sarthe Old as a layout change), and Tsukuba Circuit. They are most-likely present due to the ongoing development of Gran Turismo 5 at the time, with these courses presumably being worked on during development at the time of release for Spec III.

They have interesting properties:

Within the game's files for the Spec III version of the game are unused music tracks. The filenames of these music tracks would indicate that they were used for brief music video cutscenes that presumably displayed cars accompanied by these BGM tracks, but their exact use is unknown.

There are four known intro FMVs to the game.

The North American release used a different song, a remix created just for the game, of Weezer's "Automatic" done by a group known as L.A. Riots; the FMV was also tweaked again. Later in the game's lifetime, the Japanese version was re-released on a disc containing all updates to the game, known as Gran Turismo 5 Prologue Spec III, with the disc receiving a new intro stemmed from the North American version, using the same song and most of the same content, except some scenes have been replaced with scenes featuring the newly added cars.