After a long and complex development cycle accompanied by various delays, the real successor to Gran Turismo 4 finally arrived to players across the world, almost six years later.

Gran Turismo 5 was the title that had many firsts for the series, including various licenses such as NASCAR and Top Gear, robust online services and features, a course maker of all things, and even DLC.

The game's staggering count of over 1,000 playable cars is supplemented by carrying forth the tradition of recycling cars as-is from its predecessor, even incorporating cars from the PSP spinoff into the mix.

The previous two PlayStation 3 titles, Gran Turismo HD Concept and Gran Turismo 5 Prologue, had a "Secret menu" that allowed for configuration of various aspects in the game. Well, surprise! It's in here, too. And there are two ways of accessing it:

For Versions 1.00 through 1.03 of the game, a hidden button code that can been used to access the Secret options is still present afterall, however it only works on these early versions of the game as it was disabled on all later versions. To unlock the Secret Options via the hidden button code, go into the Options and position the cursor at the top-rightmost section of the options categories, hold down the L1 and R1 buttons, and then input this 13-button sequence: Up Up Up, Right Right Right, Up Up, Right Right, Up, Right, START. A sound will play if the sequence was input correctly and the Options screen will refresh with the Secret options unlocked; the cursor will be offscreen, but pressing any of the directional buttons will return it to view.

Alternatively, another way to access the Secret options on any version of the game is by enabling the flag from within the save data:

Many tools for computers have been made by several individuals that automate the process above.

While some of these options are identical to those found in Gran Turismo 5 Prologue, there is also a slew of new options available. Some options were taken out in older versions of the game, but this section will cover features only found in the latest version.

This category has been present in Gran Turismo HD Concept and Gran Turismo 5 Prologue, so it would obviously be here, too. Just like the previous two titles, these settings primarily consist of limiting the player's time and selection of content within the game, as well as other settings that were probably used in public kiosk and event scenarios.

Just like in Gran Turismo 5 Prologue, this category allows you to toggle the display of available icons to select from on the My Page screen. It is possible to lock the player out of the Options menu or game modes with this, and if that happens, the save data will need to be deleted and a new save must be created to restore the original settings.

Here, you can select up to 80 cars that will be available to players in Arcade Mode. For these settings to take effect, Own Car Limits must be set to ON in the Special Settings category.

Similar to the previous category, you can select up to 80 cars that will appear as opponents. For these settings to take effect, Limited Opponent Cars must be set to ON in the Special Settings category.

Identical to the previous category, you can select up to 20 courses for players to choose from in Arcade Mode. For these settings to take effect, Limited Course must be set to ON in the Special Settings category.

It is unknown what the function of any of the options here is, as toggling them doesn't appear to do anything in the game. However, it can be assumed that most of these options here are linked to the Online Race mode (labeled as "label_lounge" in the Toggle Display category). The Online Race mode can be assumed that it was the mode in which developers of the game used to join online races or lobbies. The "lounge" moniker could refer to what the developers called online races and lobbies.

By editing a string in the game's executable, one can change the version branch of the game. As mentioned above, unless modifications to the game's scripts are used, additional features and functionality can be accessed if the game boots under a particular version branch. 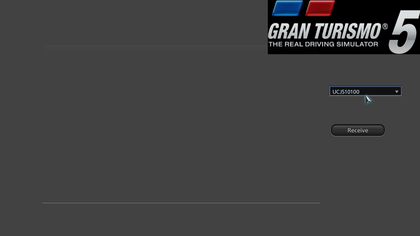 When booting into rcvtst, which is short for "Receive Test", this version branch brings forth a screen that is used for testing the importation of garage data from a copy of Gran Turismo (PSP) running on a PlayStation Portable console. The following process is how to use this screen's features:

All of the cars that are present in both the PSP title and this game are displayed on the screen. If a color for a car exists in the PSP title but not in this game, then it will read "no such car color" for its vaule on the color column. There is not much else to this screen, otherwise. Unfortunately, the functionality of this screen is broken on this version, as when the Receive button is selected, the game fades to black and reloads the screen. However, this screen is present and also fully functional in GT5 Demo 2010.

The term "runviewer" has appeared many times throughout the games of the franchise, and while the definition of the term isn't known, it typically relates to game development. This version branch was probably used in conjunction with QA Mode to allow for quick debugging of features and content in the game. Running the game under this version branch enables a few adjustments to be made that are normally outside of the player's control:

In the case of this game, the demo version branch would have been used at organized events or in-store/public kiosks. Prior to Version 2.00, all of the options that are selectable on the top menu except for Arcade Mode would be disabled for access; selecting any of these disabled options would present a message exclaiming that "this feature is not available in this version." On all versions from Version 2.00 of the game and beyond, the selection opens up and all top menu options are available, but the core gameplay elements of GT Mode are disabled; the player is able to select GT Mode and load into the home screen, but all options on the home menu except for the Garage and setting options are disabled. Further content access restrictions can be set from the Secret Settings in the Option menu to precisely limit how much content players can access.

Version 1.10 adds an exclusive feature that never appeared in any official versions of the game: "Data Presentation"; the feature in this version is barebones as it lacks the proper labelling/localization text of its contents, which were added in Version 1.11. This feature is an early implementation of what would ultimately become the GPS Replay Visualizer in Gran Turismo 6. It's unknown if it functions correctly, or at all, and why it was never added to any official versions of the game.

Version 2.08 of the game adds an "Online Race" menu option to the top menu of the game. This option is not immediately visible by default and it must be toggled/enabled via the Toggle Display category of the Secret Settings in the Options menu. While this option appears to do nothing on any other version branch, the third, fourth and fifth options work only on this version branch. Selecting LAN Battle will bring the player to a fully-functional room browser for LAN sessions. This allows for networked multiplayer races to come back to life once again. All features that were available in the now-offline Open Lobby are present here, which includes setting room passwords and Shuffle Races. When configuring a new room, voice chat is disabled and cannot be activated as transmitting voice-audio data in a LAN environment would be obviously impractical; also when configuring a room, bandwidth is still able to be adjusted with an exclusive option for LAN environments which sends even more packets than the highest option that was available when playing over the Internet.

While networked multiplayer functions without any issues, there are a few bugs:

Normally, QA Mode (also known as Debug Mode) is only enabled if the game's executable is compiled as such with the appropriate information. However, much like version branches above, with a simple change of a string inside of the game's executable, the game can boot into QA Mode. QA Mode enables several features and shortcuts for the developers to quickly access or debug certain parts of the game.

While the game is running in QA Mode, the following functions are available:

A hidden free camera that is used for debugging and freely moving around a course is present in the game engine. It can be accessed during gameplay by changing the value of offset 422CB9B0 to this four-byte value: 422C2F50

The controls for operating the free camera are below: 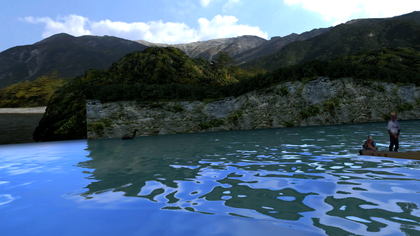 A screenshot of the "Nessie" Easter egg on Trial Mountain Circuit taken with the free camera.

Below is an example for the Gran Turismo Red Bull X2011 Prototype: