This is a sub-page of Gran Turismo 5. 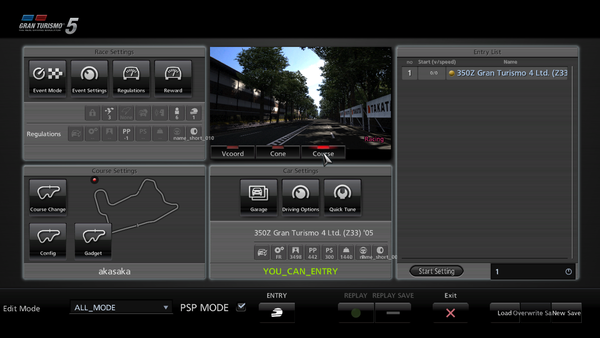 By changing the game mode parameter of an event to RACE_EDIT, the game will then load into this screen. This is a fully-featured in-game race event editing utility that might have been used by the developers to create some of the game's events, such as license tests. While some functionality causes the game to soft-lock in an idle state, most of the features still work. The user can completely customize the event, from the event's type, settings, regulations, vehicles that the player or the AI opponents will use, the course used and props to be placed on it, to many other configurable settings. This utility showcases that the game is capable of much more gameplay features than what the in-game events utilize. 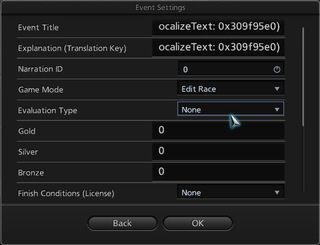 This sub-section configures what mode of gameplay the event uses, as well as any target values or conditions the player is required to achieve if necessary. 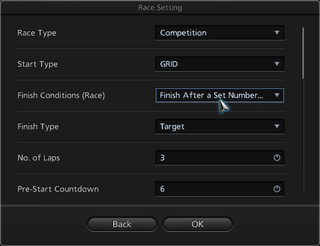 This sub-section configures many variables that the event uses, primarily affecting the length, difficulty, variety and many other elements that the player will experience in a given event or race. 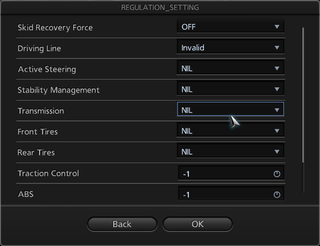 This sub-section configures many variables, restrictions and regulations that the event uses to restrict the selection of vehicles permitted to enter the event.

This section is used to configure any rewards that the player receives for finishing the event, such as Credits and Experience Points, but it doesn't appear to work. Selecting it plays an error sound and doesn't open anything. 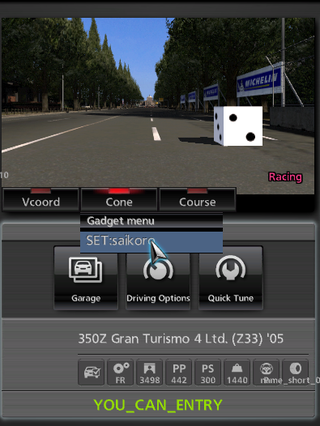 This tab allows the user to place "gadgets" on the course. "Gadgets" are how the developers define objects that interact with the game's physics model, such as traffic cones, pylons, barriers, tire stacks, and others. Gadgets are often placed during License Tests and Special Events, and with the appropriate configuration of the event, they are used as obstacles that the player must avoid or else they will fail the event. Gadgets that have been placed on the course are stored in the event's configuration as XYZ coordinates. It is worth noting that not all courses can have gadgets placed on them; a particular course must have gadgets defined in their course files in able for them to be spawned, so a course like the Eiger Norwand Short Course, which doesn't have any gadgets defined for the course, cannot have gadgets placed on it.

Also, the gadget as shown in the screenshot here for the Tokyo R246 course, named "saikoro", is a hidden gadget that is not placed anywhere on the course normally; it is a simple square object with a crudely implemented texture of a traditional six-sided die. 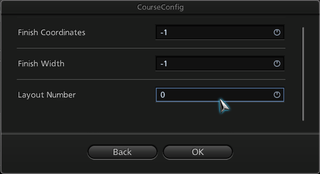 This category allows the user to change the course used for the event, as well as other settings related to the course. 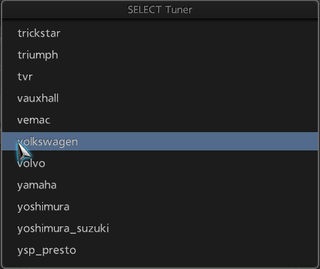 This category, located right in the center of the screen, deals with configuring vehicles that will be used in the event. 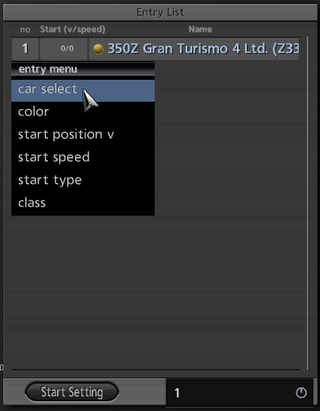 The Entry List displays the vehicles that will be entering the event. The vehicle that the player will use can be configured by selecting it from the list. Any other vehicle that is not configured to be the player's will be automatically configured as an AI-controlled opponent. Selecting the sliding-numeral adjuster on the bottom right of the panel controls the current number of entries in the event, however the game will de-load the course if this number is adjusted at any time while using the utility, and will cause the game to soft-lock.

Selecting an entry from the list will bring up the entry sub-menu with some configurable settings:

Selecting the Start Setting button brings up another sub-menu:

When the user is done configuring an event, there are buttons on the bottom-right of the screen for loading and saving files. Loading data doesn't work, unfortunately, as the function is broken here. This is because the script for RACE_EDIT mode is written to look for a development-related node in the save data, race_edit_dir, however this node is missing/not created with normal save data.

Despite not being able to load data, it's still possible to save data. When prompted to save an event for the first time, the default save path is "/app_home/home/svnwork-textdata/mtarget-gt5/textdata/gt5/license/" and the default filename is the name of the PS3 local user account that is running the game followed by four digits. The default save path was from a network-mapped location used by the developers, so it obviously cannot be used. Instead, any of the following paths below (which are mostly PS3 system variables) work for saving event data: 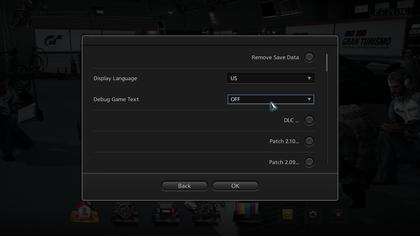 When the game is running in QA Mode, pressing the Select button while in the Top Menu will bring up a Debug Menu. This menu is loaded with all sorts of functionality and was used by the developers for quick access to a lot of objects and items without having to play the game in order to obtain them in a desirable quantity, such as freely adjusting the player's Credits and levels, adding specific cars in specific colors to the player's Garage, obtaining items and much more.

Below is a list of all functions that this menu has as of the latest version of the game:

Retrieved from "https://tcrf.net/index.php?title=Gran_Turismo_5/Scripts_and_Functions&oldid=970277"
Categories:
Cleanup > To do
Subpages