This page details one or more prototype versions of Heretic. 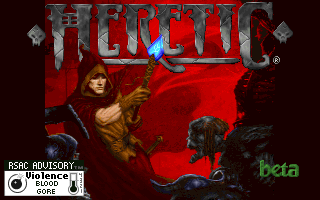 Only E1M1-E1M3 are included. The beta will bomb out with an error when trying to load E1M4.

The northwestern walls in E1M1's Bag of Holding area were slightly shrunken down.

The crusher that protects the dragon claw in E1M2 is textured with TRISTON1 in this beta instead of REDWALL.

The way this crusher trap opens up was also changed. In the beta, it's triggered by the same switch that opens the route back to the start from the area where you get the yellow key. Since the crusher and hidden door share a tag, this means the door also becomes a crusher once you step into the sector with the dragon claw. You'd usually miss this when playing normally since it requires backtracking, but it was caught in the final version and the crusher is instead opened with a walkover trigger placed on the door leading back to the start.

The beta's HELP1 screen is laid out completely differently: the automap functions are under the "help!" text, the weapon keys below them, the inventory keys are placed higher on the screen, and the function keys are placed in two columns below them.

HELP2 doesn't list the functions of the Backspace key or Shift + Enter key combination. Everything was shifted up or down to make room for them.

CREDIT was updated for the final to remove an extraneous comma after Jim Sumwalt's name.

Undead Warriors have orange belts instead of gray. This applies to every frame where the belt is visible.

The F_SKY1 flat in the beta is the same as it is in Doom and looks terrible since it was never converted to this game's palette. It was updated to show this game's SKY1 for the first shareware version, but was strangely later replaced with a four-byte file instead.

An unused sound named GFRAG is present in the prototype's files. The name suggests that it would've been a deathmatch-exclusive sound.

This lump exists in the final WAD as well, but it's twice as big and seems to be broken.