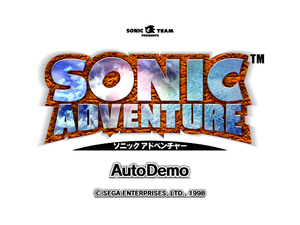 The AutoDemo is a build of Sonic Adventure designed to showcase the game through preset CPU-controlled demos of certain stages in the game. With a burn date of October 16, 1998, this build predates the Japanese final release by approximately two months.

Upon digging through the AutoDemo's contents, however, a plethora of unused and never-before-seen content was found to be inside...some of which was thought to be lost to time. It was recovered and released on May 21, 2013 by Orengefox.

As this is an autodemo, the game doesn't react to the player's input at all. This means that the introduction movie as well as the cutscene/level demos are unable to be skipped. In the final, they can be skipped by pressing any button. The SEGA logo doesn't appear when first loading the game, but shows up normally before the opening movie after that.

The cutscenes and levels chosen to play throughout the demo sequences are different to the ones that play in the final game:

The SEGA logo is a lot darker and smaller than the one used in the final.

The mission cards present in the demo are very different to the ones used in the final game. Even though the game only uses the Japanese versions, there are English versions of the cards in the game's files.

In the AutoDemo, all Life Box icons face to the right with the exception of Sonic. This was changed in the final, where all the icons face to the left. The Tails, Knuckles, Amy, and Big icons' transparency issues were not fixed, though.

The HUD is different in the AutoDemo. The Rings icon is slightly different and there is a "Level" part that is not used anywhere in the final game.

Big's HUD lacks the darkened numbers and his weight value is also fixed to 12345g in the AutoDemo. His life counter in the AutoDemo is displayed in the top-right corner in the form of lure icons.

The Chao icon for stress was changed in the final:

The billboard advertising "Chao in Space" in the final advertises something completely different in the AutoDemo: "The Man 3".

This billboard can be seen in the final, but only during the Egg Walker fight. It was removed entirely in Sonic Adventure DX.

The pause menu uses an earlier design than the one in the final, though it can't normally be seen as the pause menu is disabled:

The only thing that remains of the earlier pause menu in the final is its textures. Interestingly, the AutoDemo's top text translates to "Resume Game", while the final version's is simply "Continue."

There are two images (stored in halves) reading "Start!!" and "Goal!!" in the AutoDemo's files. They seem to be some of the earliest files in the game, dating back to November 11, 1997.

A total of 29 tracks are present in the build, some of which are used in different levels than the final, or used in the demo at all.

The following tracks are on the disc but are never heard in-game:

Despite the Chao garden theme and Speed Highway 2 playing normally in their stages, they're technically unused in the demo as it doesn't take the character to those levels normally.

Many of the tracks in the game have noticeable differences from the final versions.

Some of the game's voice clips are different to the ones in the final game.

There are numerous gameplay changes in the AutoDemo compared to the final game.

Several aspects of the characters themselves were changed for the final game.

The Chao system is very limited in comparison to the Chao system used in the final. All Chao in the garden will stay completely still until the player approaches them, when they will then run up to the player continuously. If a Chao gets hurt by the player, they may decide to briefly run away from them instead.

The only garden that can be loaded in the AutoDemo is the Station Square garden.

Some of the enemies in the game are slightly different to their counterparts in the final version:

There are a few objects in the AutoDemo that look or behave different to their counterparts in the final. 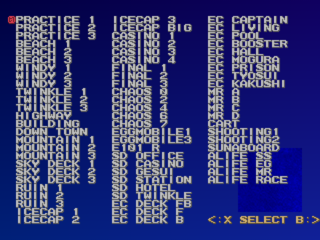 Like in the initial Japanese release and the US release, a level select menu can be accessed.

To access it from the title screen, set the byte at 0x8C794C90 to 00 and the level select will load. Using the level select menu here will display the HUD properly in-game and allow you to control the character. The pause menu will not be enabled however.

To access the level select during cutscenes, demos, and gameplay, change the byte at 0x8C768B38 to 02. This method does not work on the title screen of this version, and will not give you control of the character unless you already had control (from loading a level from the title screen level select).

It looks as if the character select was meant to use icons here instead of names, but this doesn't function properly and just loads from whatever textures are in memory.

Hot Shelter is missing from this level select, along with Eggmobile 2 (Egg Walker), the Knuckles fight with Chaos 6 (listed separately in the final game's developer level select because of the changes to the arena in Knuckles's fight), the first battle with E-101, and "Eggmanrobo" (Zero).

The AutoDemo version has an ADX feature which is removed from the final releases, It'll always appear at the bottom of the screen.

In the AutoDemo, it is still possible to play the game similarly to the way it would have been played at the Tokyo Game Show.

There is a byte in RAM at 0x8C794C90 that controls which menu you are currently on (0x2C instead of 0x8C for Demul with Cheat Engine). By setting this byte to 03 during the AutoDemo title screen, you will see the title fade to white and the TGS character select will load. Selecting characters here will load their tutorial screens and then their demo level, giving you complete control of the character without having to enable the controls yourself. You start with 96 lives and 50 rings, although you can't pause the game.

Notably, Knuckles has an interactive in-game tutorial that teaches the player to glide.

The title screen of the TGS version can be found in the AutoDemo's files. 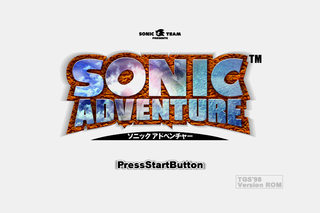 English versions of the TGS "How to Play" images can be found in USA_SOUSA. They aren't in any other version of the game, nor are they used at any point in the AutoDemo:

The English version of the Knuckles gliding tutorial can be found in K_TUTORIAL_USA:

On track 1 of the disc, a folder can be found containing a single wallpaper that can only otherwise be found on the Japanese website: