This page details one or more prototype versions of The Jungle Book (Genesis).

A prototype that was used for Winter Consumer Electronic Show (WCES) 1994 was dumped by drx in May 2019. It contains a number of differences from the final game, and many different layouts.

Although not used, most of the storyline text is in the game's code. There are some mistakes with names (Bagheera being known as Begheera, Colonel Hathi being known as Colonel Hoffee), and mostly minor alterations throughout.

The intro text has two extra lines, although it's unknown if the first line was really supposed to be the first, since it doesn't match up with the story.

The only ending text corresponds to Shanti. Somebody had a bit of fun with it, which needless to say got removed in the final.

The text for the debug mode found in the final is here, but it's currently unknown how to access it properly.

The sound effects (and two songs that are present) are listed internally.

On the subject of music, the songs used vary slightly compared to the final. Bare Necessities plays slower, for instance.

Other menu settings are here, too. But you can't use them.

There are no story elements present just yet, aside from those squirrelled away in the code. As such, the book opening is also missing and instead replaced with the background from the title screen and some text telling the player to 'Get Ready'. 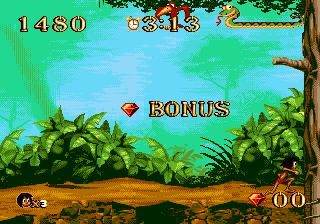