This page details one or more prototype versions of The Revenge of Shinobi (Genesis).

Oddly, the version of The Revenge of Shinobi included in Volume 1 of the PC Smash Pack collection is a prototype.

Found in the Sound Test are those 4 sound effects (respectively AE, C5, C8 and CC.) which are likely related to the scrapped Bonus Game (documented below), given how different they are from the used ones. 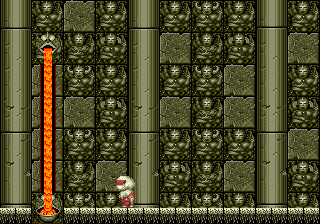 An unfinished, inaccessible bonus game can be found in the game's code. It was intended to be based on the fight with Mandara, the third boss of the original game. A large wall of statue-like enemies would slowly close in on Joe and need to be eliminated before pinning him.

In its present state, Joe can walk and jump around... and that's about it. He can't move past the lava wall, but it has no effect otherwise. There are no enemies to face and there's nothing else to do.

"We wanted to include bonus stages; however, we realized that they were not going to fit in the available memory. Unlike optical devices, which are commonly used nowadays, we were limited by the available amount of memory, as ROM was very pricey."

It's Joe Musashi... in chibi (miniature) form. The throwing and knockback frames are unused at this point in development. The middle running frame also doubles as the standing sprite.

A baseball, intended to be Joe's projectile here, in place of his standard shuriken.

The enemies. They come in four different varieties, each with two frames of animation, and were intended to spin when hit. In keeping with the game's theme of copyright infringement, the statues (along with the ones in the background) are based on Ultraman characters.

Also found on the game's code, and only accessible through hacking is an early/alternative ending where it's heavily implied that Joe Musashi died during his fight against the final boss. It shows Joe's fiancée, Naoko, alone and holding his sword. While she is looking at the starry sky, a sprite of Joe Musashi appears shortly after. It's basically identical to the final game's Bad Ending but with the roles reversed. It's possible that this ending would be achieved by finishing the final boss with a Mijin ninjutsu, which permanently kills Joe Musashi in the process, leaving Naoko alone.