Shinobi III: Return of the Ninja Master is, as you'd expect, the third game in the Shinobi series.

A handful of error messages can be found near the header. 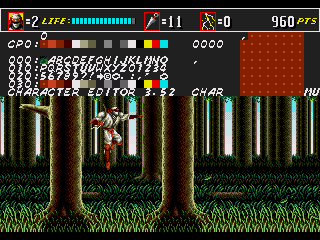 Pro Action Replay (PAR) code 004C0A:4E71 enables a character editor which can be accessed by holding B + C and pressing A. You'll see a bunch of crap appear on-screen and the words "CHARACTER EDITOR 3.52" under everything.

The character editor allows you to modify the VRAM. You can redraw individual sprites and change the color palettes. Press Start to restart the game and ignore the changes, or hold B and press Start to save the changes and proceed.

The code also allows you to access the editor from anywhere in the game. Interestingly, it still resets the game when pressing Start rather than going to the memory and level editors.

The game contains a handful of disabled debugging functions which can be re-enabled through the use of Game Genie codes: 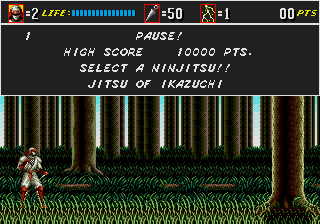 Pause, then press A, B, or C on controller 1. A "1" will appear in the top left corner of the screen below the lives counter. Hold A, B, or C and press Up/Down to toggle the level, and press Start to go to the chosen one.

On controller 2, press B.

On controller 2, press Start then A.

This unused enemy is coded such that it clings to walls and ceiling, hopping around while doing so. However, when spawned in the game, its graphics are incorrectly loaded, with the tile mapping being completely wrong and the palette appears to be missing.

The mines in Round 5 have a bottom half that can only be seen by disabling layers. This small obscured part can be seen in a prerelease video, where the graphics for the mine were originally just a background prop.

You might not be aware of this, but you could use it with a cheat code in the original. The game actually supported the 6-button gamepad for the MegaDrive, which at the time had just been released.

I’ve never asked the original development team, but I hear this game took a quite a while to develop and I have a feeling they wanted to make it so that the guard action was instantaneous. Perhaps they gave up when they were doing adjustments to the game balance or something. At the very end of the development cycle, they heard 6-button controller was coming out and implemented support for it, so I imagine that at that point it was too late to include the guard by default.

In six-button mode, the game uses the default configuration shown on the left, which adds separate buttons for throwing kunai, slashing and guarding (normally performed with a single "Attack" button in different contexts), as well as a button to switch Ninjitsu (which normally requires pausing the game). Only A, B and C can be reconfigured, and are mislabeled as the game still uses the three-button labels ("Ninjitsu" and "Attack" instead of "Guard" and "Slash"). The dive kick is performed using Slash and thus the same default button (B).

The Nintendo 3DS version of Shinobi III makes this option readily available via a menu option. However, this code is impossible to implement on the Sega Genesis Mini, since the system's emulation menu was set to the "Mode" button. Configurable controls were also disabled altogether as a result (explained below), likely because of the aforementioned issue, as well as the standard three-button controller being packaged with the console in that particular region. The latter also applies to its release on the Nintendo Switch Online service. It's also possible that this is a leftover from the 3DS version, in which the game's regular button configuration screen was removed in favor of the one that was commonly seen in all games in the 3D Classics line, meaning that it was likely an oversight.

As noted above, the configuration controls in the options were removed from the Sega Genesis Mini and Nintendo Switch Online releases, which, in turn, made the six-button mode inaccessible. Of all the Sega Genesis/Mega Drive games included with each, Shinobi III stands out as the only one to have had them entirely removed.