PuLiRuLa is a beat-em-up that looks average at the start, but everything goes insane fast. 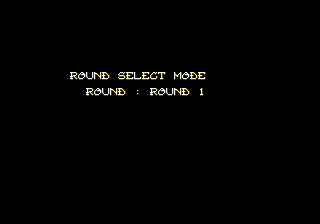 After booting the game, hold the service switch and reset the game. Afterward, a service SW error screen should appear. Immediately release those buttons, very quickly press Start x 3, Service, then Start, and the game should show the above round select. The game will then proceed as normal, though don't select "No Use".

Due to the insanely tight timing required, savestates for both versions to allow instant access to the round select are provided below.

In the Japanese version, there is a pair of legs in Round 3 with a door in the middle. The door can be opened by the player to reveal outer space, with a pink elephant shooting out of the door. If the player does, they are rewarded 1,000 points. This was removed from the World version... which turned out to be quite a pointless change, as they still show up in the game’s ending.