Space Station Silicon Valley is a 3D platformer where the player takes control of different robot animals to solve puzzles. Although well received, it's notorious for being buggy. Bug examples include a nasty glitch in the USA 1.0 version that causes crashes if an Expansion Pak is used, and an item in all versions with no hit box that makes 100% completion impossible. 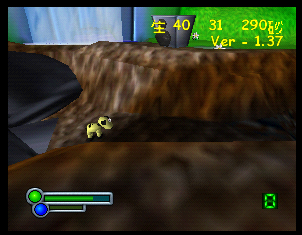 This makes the player's coordinates appear at the top right corner, as well as a version number. There doesn't seem to be any other functions.

These can be listened to in-game with the below GameShark code.

The game's internal level list has two unused slots located between indices 0x20 (the secret spaceship level) and 0x23 (the credits). 0x21 starts the player out as a Ski Husky, and contains a gigantic cyan half-pipe level model in the distant background. 0x22 is very similar, starting the player as a Bear with a brown half-pipe in the background. The player can't move in either level but the camera can be controlled. Hacking the game camera closer to the background model reveals that water ripples appear underneath the stages. SSSV's animal habitat zones are each supposed to be segments of a Stanford Torus, so it's possible that these giant half-pipe models are developer templates defining the general size and shape of a level.

Use the following code to change what's loaded when starting a level.

There are several unused animals in the game, some of which were included in the PlayStation version of the game. Use the codes below to start a level as the corresponding animal.

The Cod has no model, and is invisible if it's hacked into the game. It's exactly like the Cool Cod from the Ice levels.

The Crow has no model, and is invisible if it's hacked into the game. It seems to be the Europe levels answer to the Seagull, Parrot, and Vulture. It has a very incomplete flight control, and it does nothing if B is pressed. Strangely, its B skill is listed as "bombs," but the other 3 birds simply have a claw attack for close range.

These foxes do appear as enemies in Give A Dog A Bonus, but it isn't possible to play as them since Evo can't swap between animals on that level. Their controls work properly, and Give A Dog A Bonus can even be completed while playing as them, though it's considerably harder since the fox's missiles take a long time to recharge! Prerelease footage shows that the Fire Fox was once a playable animal, and could originally transform into a regular quadruped fox after landing on the ground.

Frogs appear as enemies in Big Celebration Parade, but it’s not normally possible to play as them. When the Frog is hacked into Europe’s levels it can black out the screen when near the camera, and viewed from afar it looks like a small Bear's torso. Its description also does not work if the player tries to view it in a Europe level, however, it does work in other areas. It appears as a green LOD billboard blob when loaded in most other zones, but its model does load correctly when hacked into Big Celebration Parade. Its Jumping is like the Springy Thingy's, and its Tongue Attack appears to do nothing.

The Heli-Mouse has no model, and is invisible if it's hacked into the game. It's exactly like the Heli-Rabbit. The Heli-Mouse seemed to have been intended to drop bombs like the Heli-Rabbit, but if the B button is pressed, the ability skill gauge goes down, but nothing happens. Prerelease footage of the game shows that the Heli-Mouse did have a model at one point in development, and was once playable in a scrapped level from the Europe biome. There's a string of developer text at address 7CF050 that says "Helimouse is gone." possibly commenting out code related to the mouse.

The Mouse looks just like the Racing Mouse, except with feet instead of wheels. It's very weak and slow, and its jump is roughly the same height as the Dog's jump. Its walk and jump animations appear to be the same as those used for the Desert Fox, and it has a similar idle animation to the Rabbit. The Mouse's "Radar Ears" ability appears to be unfinished since it makes the Mouse's ears disappear, but it does also interfere with enemy animals' behaviours, for example causing foxes to face away during their attacks. It may also have been intended to detect far-off enemies or items, possibly by rotating the ears in their direction - the mouse's ears rotate randomly when it's dead, which might be related to the move's broken implementation. Some of the normals on the mouse's model seem to be inverted by mistake, allowing the tail to be seen through the body. The mouse does appear in Big Celebration Parade, but it's normally impossible to play as one there. Prerelease footage of the game shows that this variety of mouse was once playable in an early version of Rocky Hard Place.

This bear does appear very briefly in-game (rolling past and vanishing at the start of The Engine Room, and also appearing if you hold down A from the start of the DMA logo screen) but it's not normally possible to play as them. They look very similar to the regular bear but they're juggling three balls, have a unicycle instead of legs, and are continuously circled by pink and cyan stagelights. The Mystery Bear can boost while holding down A until the gauge depletes, but doesn't seem to have any ability set to B. Evo and other animals will begin to laugh themselves to death if they spend too long in the bear's presence, even if the bear isn't alive! Early footage of the game shows the player controlling the Mystery Bear in an unfamiliar cave-like level, as well as an early version of Rocky Hard Place.

The Racing Hippo has no model, and is invisible if it's hacked into the game. Neither of its abilities seem to work, but both gauges go down if the respective buttons are pressed.

In the very first level (Smashing Start), a hidden area exists on the other side of the wall beside the waterfall. The layout of this place closely matches the main portion of the level, as it's an undamaged version of "Smashing Start" that's used during the crash landing section of the intro cutscene. The area is mostly flat, with several trees and flowers, and it contains an invisible but functional pool of water in the spot corresponding with the waterfall. Even though only some of the area is shown during the cutscene, the area is fully modelled and has correct collision.

It's possible to reach this area without hacking by controlling the dog and using a crate to jump on top of the stereo speaker on the port side of the spaceship, as shown in the video. Barking while standing on a speaker launches you into the air, and pressing A and B to jump and bark simultaneously gives you just enough extra height to clear the level's perimeter cliff.

Present at 0x7CEF30 in the ROM are some development-related strings.

Present at 0x7D1220 in the ROM is the text that's displayed in the background when you take control of a new animal. Although it is used, it's almost impossible to read in-game since it scrolls so fast. 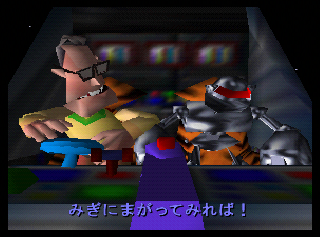 Present in the USA and European versions of the game is a normally inaccessible Japanese language option. Since the game was never released in Japan, this localization is never used. You can access it by using one of the below GameShark codes.

Unlike many N64 games, SSSV was programmed so the exact same code could be used in multiple regions. Simply changing the region in the header can switch the game between English only (NTSC-U), Japanese only (NTSC-J), and European multi-language (PAL). The cutscene timing also updates based on the Region code.

Originally it was thought that the European version of the game added a check for the Expansion Pak. This fixes a bug present in the USA 1.0 and Japanese "prototype" version where the game would randomly crash during cutscenes if an Expansion Pak is used. It was later found that a USA 1.1 version exists that also includes this fix. The crash can be fixed in earlier versions by using a ROM patch or two simple GameShark codes.