On the bottom of the screen on level title cards, you usually see a message telling you either the game difficulty setting or that it is a demonstration. If word $FFF29E is set to $0002, "DATA SAVE MODE" is shown instead. With this word still set, code at $4938 will run that saves demo data for the current level somewhere. The initial address, at $64C, is set to the locations of the demos in ROM; send it elsewhere (such as to SRAM at $200000 if your emulator automatically creates SRAM on write), play a while, then go back to the title screen, turn the setting off and watch the demo play back. 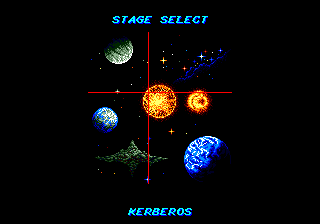 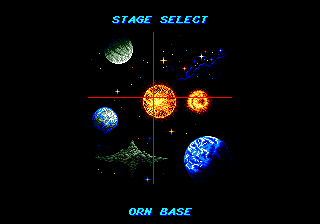 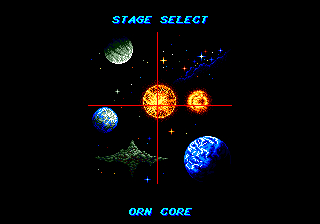 The Stage Select menu has code to show the last three levels (Cerberus, ORN Base, ORN Core), including placing the targeting crosshair in the right place. You can override the stage select's limitations to select these three levels with codes 6E45:07, 6E63:07, and 6E75:07. Interestingly, Cerberus is named "Kerberos" in this menu.

(note from andlabs: choosing a level, then beating it, will start you at Planet Hydra again, presumably because there's another set of level complete bits. There are ways around it; for instance, use FFF2A2:FF on ORN Core to see the ending.)

Note that the US and Japanese versions are contained in the same ROM. The version that boots up is dependent on the region setting of your console/emulator.

Enemies in the US version are slightly less resilient, making the game somewhat easier.

For whatever reason, the "Tecno Soft" name is changed to "Techno Soft".

The name change also carries over to the staff roll.

In the game, pause and press Up ten times, B, Down two times, then continuously press B until the weapon meter is replenished and A to equip craws. Notice that if you change the controller configuration type, you'll have to alter the inputs for the cheat too.