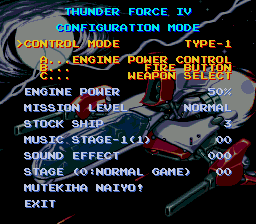 If word $FF8CA4 is nonzero, two new options are shown on the option screen:

There does not immediately appear to be a cheat to enable this. The first option replaces the play voice sample option.

The first option can be selected normally by scrolling to it; the code for the first option (shared with the play voice sample option) at $10184. The range of values for this option goes from 00 to 10; the code sets the word at $FF8C9E to the BCD value shown.

The second option cannot be selected normally (code at $FB38 skips it and goes to EXIT); you must force it to be selected by setting word $FF8C8E to $0007, then removing the code once it is selected. There is code for this option, at $1021A. Pressing Left/Right will show OFF and ON! options.

The first option does not appear to do anything; the second option's text translates to "there is no invincibility" and thus does nothing.

5B88:4E71 skips over a jump that changes the text PRESS START in the demo gameplay to JOY REC. The jump takes effect if word $FFF2FE <= 0; there is code to clear and a lot of other tests of that value...

In the game, pause and press Up, Right, A, Down, Right, A, C, Left, Up, B, Up to equip all weapons. Notice that if you change the controller configuration type, you'll have to alter the inputs for the cheat too.