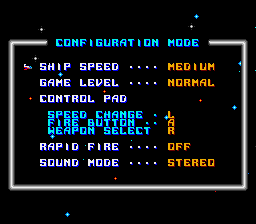 Holding Select and pressing Start on the title screen brings up a basic config screen. 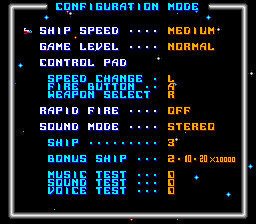 Upon beating the game, memory address 7F0390 is changed from FFFF to 0000, which expands the config screen with more options: ship quantity, point bonuses, and audio tests. For immediate access, use the following game enhancer codes: 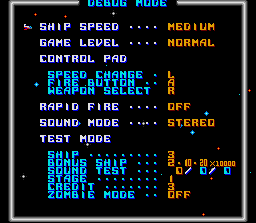 There's a hidden third options screen called Debug Mode, which has three more options: a stage select, credits modifier, and zombie mode (invincibility). It can only be reached with game enhancer codes. Enter these codes plus the corresponding code in the section above.

At least a few unused areas contain text, code and other data from Thunder Force III for the Genesis. They are easy to spot by the hex values 4E 75, the commonly used RTS 68000 opcode. One of these blocks begins at offset 006597.

The programmers likely originally intended only for three empty spaces, AAA, and SEX to be replaced with EMI on the name entry screen. However, this check is poorly implemented: it checks for any of the first two, then any of the last, rather than just the correct last. This means the following passwords are all replaced with EMI, substituting . for space:

The wings on the ship are different. License text was added to the very bottom of the screen, too.