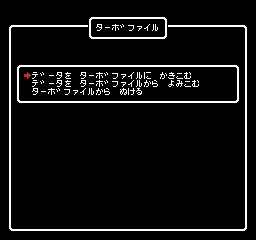 The Japanese version of the game has support for ASCII Turbo File devices, which allows players to save their current game state and return to it later, much like savestates. This feature was removed in the US version.

The Japanese version of the game has language switches for various aspects of the game, which were removed in the US.

The Priest class was changed to Cleric in the US version, possibly due to the religious reference.

The following string is present at 0x187D5 in the Japanese version and at 0x18769 in the US version and is used as a SRAM signature to test the save memory integrity.