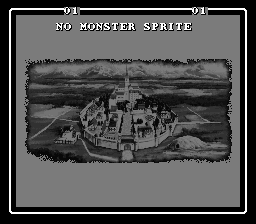 After beating the game (denoted by your characters getting an "@" next to their name), after resetting or turning on the SNES hold any button except X, A, L, or R at the copyright screen until the Capcom logo disappears.

Press Up or Down to cycle through the graphics. Press Select to switch from Music to Sound Effects, and press A to listen.

A small credit for a programmer was hidden in the Japanese version at 0x4BE:

Also present in the ROM is this string:

Which is repeated as filler.

Like the localization of the NES port of Wizardry 1, Wizardry V was subject to the typical Nintendo censorship laws, which might come off as even more blatant considering the Japanese game has a full English option.