Are you ready to play with your balls? That's the question that Antonball Deluxe dares to ask, featuring three games in one, 79 levels, 23 playable characters and an online mode. It also has the tendency to make too many ball-puns.

After the The Quickest Update in the West patch, if someone attempts to run the game in an environment that doesn't have Steam or deletes steam_api.dll, the game will display the following screen while Bear It All plays ominously. 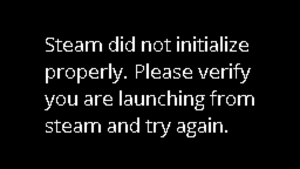 In the game, it's possible to play all 3 gamemodes online through Steam. However, by running the game in an environment that doesn't have Steam, it's possible to host your own lobbies. However, this feature seems to be unfinished, and only used for testing. 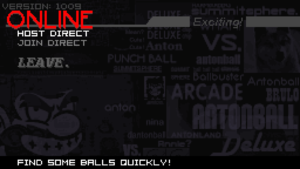 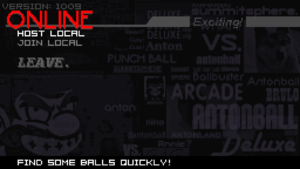 For starters, the netplay menu only has 2 options for letting you host or join an internet party. The default settings for joining a party are IP 127.0.0.1 and port 5394. Alternatively, if an empty file named localtest is found in the game's save data folder, the game will change Host direct and Join direct to Host local and Join local, and be only able to host and join local lobbies (of course). 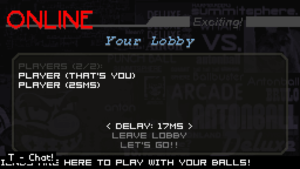 When you're in a lobby, all of the default player names are Player, you can't create invites and the lobby has a maximum player count of 2. You also can't play Punchball or VS. Antonball, as starting a new lobby from the lobby creation menu crashes the game.

Following an update, the ability to host or join outside of Steam became inaccessible because of an anti-piracy measure.

In the game's cutscene room files is an array of the same cutscene name, followed by a number (for example rm_cs2_1, rm_cs2_2, etc). For cs1 is an array for rm_cs1_1 up to rm_cs1_9. However, rm_cs1_4 up to rm_cs1_6 are missing, with no data for these scenes being left. What would've made this one cutscene longer is unknown.

Super Gangston!'s name within the game files is Septic Slam, suggested by the sprite cover (spr_septicslam) and sound file (mus_vinyl_septicslam).

Although Annie displays her regular clothing colors in game, a palette is applied over it, as viewing her sprites in a modding tool reveals that she's still using her SAGE sprites. Anton doesn't have this however.

Pressing the Shift button on the keyboard or the equivalent of the Select button on a controller during the tutorial will play the camera sound effect from Super Mario 64, internally named snd_camera. This is a leftover from a camera panning feature in the cut ANTONLAND game mode. The feature does not move the camera in the tutorial, likely due to the tutorial rooms already being no bigger than the size of the screen. According to the game's lead developer Tony Grayson, the feature was intentionally left in as an easter egg because the team found it funny. The audio file contains metadata indicating that the source was a rip downloaded from TheMushroomKingdom.net.