First release in a trilogy of "Sarge" games in the Army Men series which were ported excessively. Frustrating for its poor collision, slow-as-molasses controls and poorly-functioning radar, and its tendency to kill you near the end of very long levels without extra lives or a way to continue. 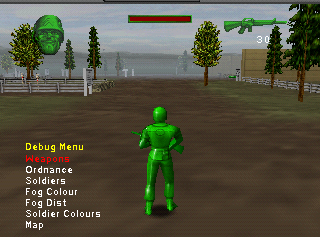 A debug menu is present in the game, however it is missing several key functions for it to work properly. Firstly, it is missing the controller routines which would allow you to enter the options and scroll through the menu. It also appears to be missing sub-function calls to the sub-menus as well. There are several uncalled functions still in the game that relate to this menu in some way. For those that are curious, you can visit that game's notes page to view these functions.

The below code replaces the mini map in-game with the debug menu. 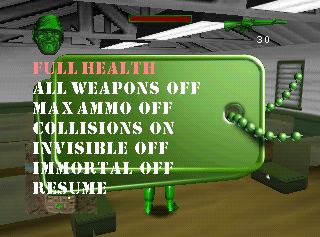 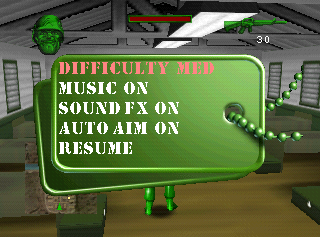 A cheat menu can be enabled with the GameShark code and pausing during gameplay. 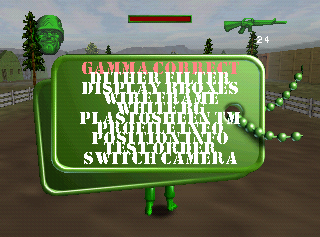 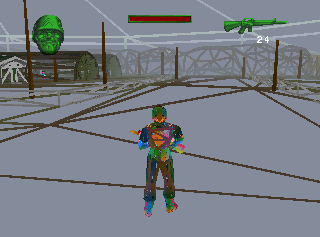 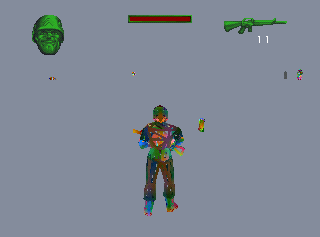 An unreferenced test menu can be re-enabled with the below code. This replaces the Cheat Menu in the above section. 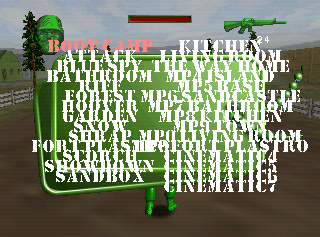 An unreferenced level select menu can be re-enabled with the below code. This replaces the Cheat Menu in the above section. This was likely going to be used with the unused all levels password. 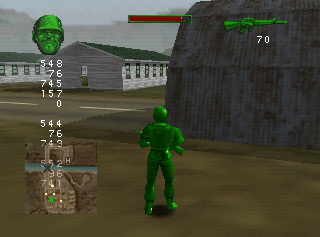 Enter THDTST as a cheat. Once entered, the message "Test Info" will be displayed, confirming the code input.

Here's an overview of what these values refer to:

The alternate X/Y/Z positions track certain parts of the player's body, whereas the main set refers to the entire body.

Present in the ROM are five additional passwords that are dummied out thanks to an inability to enter lowercase characters. To re-enable these, remove the three lowercase Zs. Interestingly, the "All Levels" cheat is displayed after finishing the final level, complete with the three Zs at the beginning. This seems to indicate that either this cheat was intended to be revealed when you beat the game, or that the devs were so bad at coding they didn't bother to bugfix the password list for the last level. The All Levels cheat seems incomplete, and doesn't appear to do anything but take you to the final level. The Continues cheat also seems unfinished and doesn't appear to do anything; you certainly don't resurrect or get another chance when dying or failing in Campaign missions. The "Living Large" cheat has (even worse) serious collision issues and you can actually get completely stuck climbing up ledges.

Alternately, you can apply the following GameShark code to re-enable all of the above cheats. Omit the lower case z's when inputting them.

Present in the game is a weapon named "Binoculars". This was likely suppose to be an airstrike at one point. Apply the below code to replace the M16's bullets with Binocular bullets.

The below text are referencing more cheat menu options that are no longer in the game.

Pressing R + L + C-Down during gameplay will reset your position to the last checkpoint. You can also use this in multiplayer.