Army Men II continues the wacky adventures of Sarge and his squad as plastic warfare spreads outside of realistic looking playsets, and into several real world locations around the house. It also leverages the fact that all the soldiers are plastic to show things that would otherwise be quite gruesome.

Several of the level scripts have lines or functions that are commented out or never called: 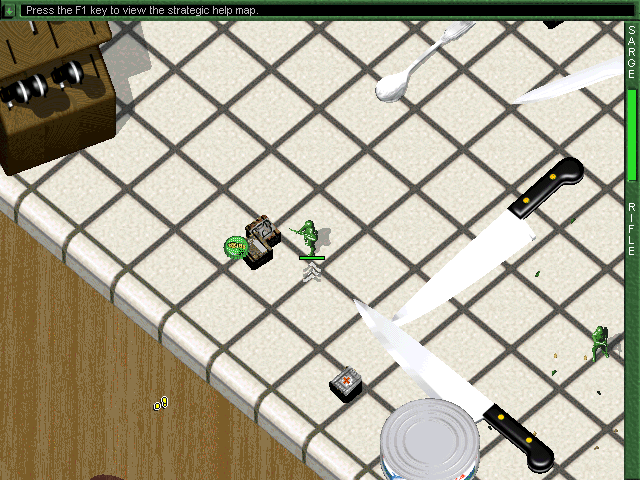 Two powerup spawns near the start of the map are left out: An aerosol can with 15 units of ammo and a flak jacket with 80 "ammo". They overlap each other and the nearby bottle cap rather oddly.

The cookie jar gets damaged immediately at the start of the level, so it starts out cracked. As a result the pristine jar is never seen.

Although the level starts with the Colonel giving instructions to Sarge, the Colonel himself has been commented out. The scene looks a bit odd as a result. The level also fails if the Colonel dies, which thus isn't normally possible. The following text also goes unused as a result:

Out of the 40 zombies that are defined to go into the zombie pen, half of them are commented out.

Some of the map scripts also have author credits in them:

Homeland, Airborne, The Big Bang, and Fortress are credited to Jason Wildblood, while Insane Grey Doctor, Behind The Eight-Ball, The Hobby Table, and Area X are credited to Alvin Muolic. Both are listed as designers in the credits. The other scripts don't have credits. Possibly they were made by Greg Amor, who was the third designer.