Bendy and the Ink Machine

Always remember what Walt Disney himself says when thinking about bringing beloved toons to reality; "All our dreams can come true, if we have the courage to pursue them." 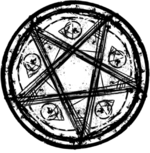 A pentagram. Was used as the respawn point in Chapter 2 before being replaced by the Bendy statue upon Chapter 3's release. 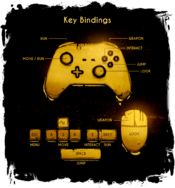 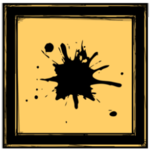 While six portraits with different pictures are used in-game (seen from the power room where you have to activate the ink machine after collecting all six items), there are actually two other portraits that went unused. One is splattered with ink, and the other blanked with a long stitch. 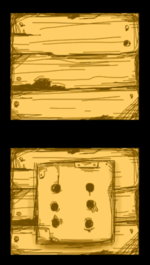 Textures for a wooden board of some kind, with one of them having some sort of plug socket. 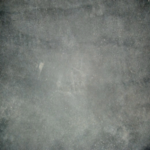 An odd cement texture that looks completely different to everything else in the game. Was added in by the time Chapter 2 released.

The elevator pad from Chapter 3, except the word 'DOOR' reads 'OPEN.'

Located in the game files for Chapter 4, there are multiple icons each with a different nation flag. Their purpose is suppose to be used for the player to choose the game's language. In the final game, there is a multi-language support, but these icons go unused. There isn't even an Arabic option in the final game at all!

Several messages that would've been revealed using the Seeing Tool go unused in the final game. They're all completely white, so they may be hard to see.

After the full game released, two animated cartoon clips (click to animate) can be found in the game files. These are not used anywhere in the final game. The following shows The Dancing Demon and the Bacon Soup advertisement. The reason why it's not used was either time constraints or these clips doesn't fit in the appropriate locations. 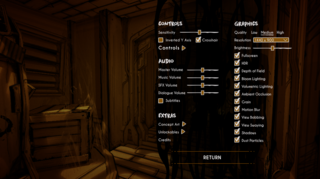 An unused menu from the prototype of Chapter 3. It features an unused "Extras" area of the menu, a credits section, and a different font. 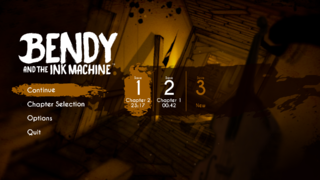 There is an unused screenshot in the game's files with a multiple save file feature, which is absent in the final game. 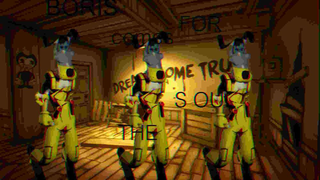 An incredibly odd image of what appears to be three glitched-up Borises with the phrase "BORIS comes FOR THE SOUL" in the background can be found in the files of the mobile port of the game. Your guess is as good as mine as to what this means. 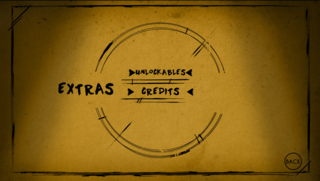 After the release of Chapter 4, a hidden Extras Menu could be accessed via the use of a bug. Nothing happens when clicking on both selections.

After Chapter 5 released, the Extras Menu was removed, most likely replaced by The Archives.

Piper, Fisher, and Striker all have dying animations (click to animate) left in the game files. These animations remain unused as all three turn ragdoll upon death.

In the animation that plays when she bangs on the glass in Chapter 3, she can be heard laughing. This actually has an animation associated with it (click to animate), but due to the lights going completely dark before this triggers, it is impossible to see in-game.

An earlier version of the Searchers' walking animation (click to animate).

Allison Angel has several face morphs that are unused in the final game. Looks like she was planned to be a bit more expressive.

An idle animation for Beast Bendy (click to animate). He's always on the move during his fight, so this is never seen in the game.

An unused audio file with Henry saying "I'm getting the hell out of here!", which plays after encountering Bendy while the studio is starting to flood. This file has only been heard in Chapter 1's prototype.

An unused audio file with Henry saying "What the heck was that?". It is unknown how this would have been used.

All of the Searcher's death moans, supposed to occur when killed. They can be only found in the game's files for Chapter 2's first pre-update build. Once Chapter 3 was released the Searchers' models were redesigned, one of their unused death moans was recycled for one of their current death sounds, while two more of their unused audio files were edited and used by the Swollen Searchers.

Found in the game's files for Chapter 4, there are two unused sound files consisting of just loud beeps. Judging by their file names, both sound files are placeholders.

First introduced for Chapter 2's release, along with Chapter 1's first remastered update. There is a vintage-styled music (titled "You Left Me in a Heartbeat") used for the projector that turns on automatically inside the theater location in Chapter 1. It was also used for replacing the "Hellfire Follies" music in the theater location, which is previously used back in the other location. Upon the release of Chapter 4, the music was ultimately replaced by the cartoonish whistle. 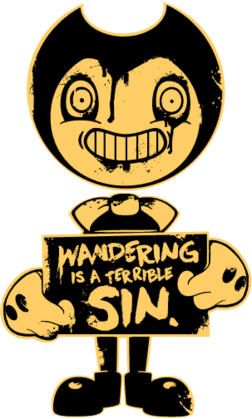 This scary Easter egg, bearing a sign reading "WANDERING IS A TERRIBLE SIN", is placed on the walls of rooms you can't legitimately get into without using teleport hacks or glitches. This sprite was found in Boris and the Dark Survival game files. Wandering Sin doesn't appear in older updates from the previous two chapters and later added following the initial release of Chapter 3. It's oddly called "lamp" in the game files. 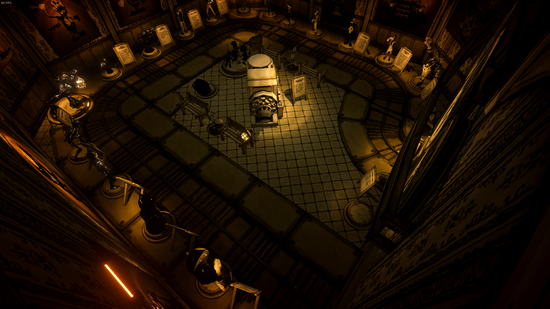