Delta Force: Black Hawk Down is a military shooter initially released on Windows, which eventually got outsourced to Climax to make the Xbox port, and Rebellion for the PlayStation 2 port. Unlike the other releases, the Xbox version never received the Team Sabre expansion. 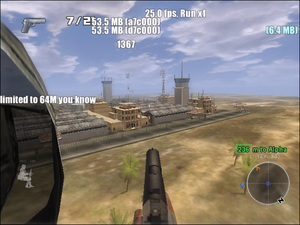 A couple of displays showing the framerate, how many frames have been drawn in total(?) while in-game, and current memory usage. In order to allow this to render, a different display must be active that shows the line "I'm not limited to 64M you know" which funnily enough is cut off at the right place to say it is limited to 64M, even on Xboxes that do have 128MB RAM.