It's a sequel to Densetsu no Stafy, but this game was also released only in Japan.

Two small compile strings can be found at 0x14DEB0. The second differs between the versions of the game.

It's followed up by two copies of a version number at 0x14DF90, which does not differ between the versions of the game.

The test stage's area 1 map 2 instructs the player how to print a truncated version of the build date in white on the top-left corner of the screen, via water tiles which spell out "DATE CHECK PRESS L+R". Since pausing on the map is problematic and freezes the game, the player should be careful with the button presses.

While the test stage was probably the main intended way for TOSE to access it, the code that enables printing the date check with L+R is actually tied to the unused pink creature found within that map. Hence, adding that character in another map (even a regular map) is another way to enable it.

The full alphabet (in uppercase and lowercase) and various other characters are available in this game to be displayed in texts. Unlike Densetsu no Stafy, the game appears to use a different scripting language, which is why texts such as ":flagon" are scattered across the ROM. Regardless, English is normally never displayed in the game. 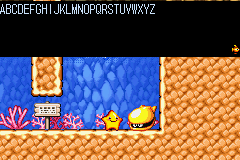 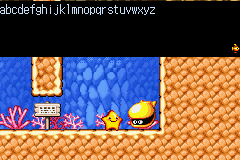 To replicate this, first save Shift-JIS encoded text in empty space in the ROM (or use a memory editor), and then use code 03007928:08XXYYZZ where the parameters represent the offset of your text. Talking to any character may then print the text (note however this method is buggy and sometimes freezes the game or corrupts the sprites on the screen). 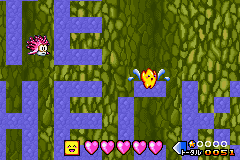 The test stage is internally Stage 0 and consists of three levels (areas), each with a different number of rooms (maps); though lots of the maps aren't connected to each other or lead to dead ends. Following this game, all other Starfy games would have test stages unused in the final game.

In this game, it is used to test certain elements of the engine and gameplay including NPCs, characters/enemies, scripts (which may be within character scripts; like the date check function or the function to steal Starfy's pearls), vehicles, signboard tests, map connections, maps with different music and boss battles. However, a lot of the maps suffer from glitches.

The test stage can be accessed with the methods below.

To quote Dimedime who documented it (edited to remove an error and for extra clarification):

A save file of the game already completed so this can be accessed, can be found here.

(Source: Dimedime, Torchickens (save file, modified from a GameFAQs save))

The game has a few unused characters. One of the quickest ways to see them is to change the byte at 0819CC98 in VisualBoyAdvance's memory viewer, and then play Stage 1-1 (note: in case this does not work, try using a save file of Starfy 2 already completed).

ID: 00, 01
A strange green alien like creature. Object 00 has the creature stationary, but object 01 gives it an animation of discharging electricity (similar to the used Densetsu no Stafy 3 boss Buirun); but due to a glitch, its sprite may cycle through seemingly every other object ID in the game. It is found in the test stage.

ID: 05
An insect, resembling a green caterpillar or worm. It can be defeated by Starfy with a Star Spin. It is the only character/enemy which hasn't been located in the test stage.

ID: 06
A flatfish. It can be found in the test stage. It is assigned a conversation like a character, but it's currently unknown if the actual conversation remains in the game; since currently hacking it in to Lobber's Cave area 1 (revisited) would make it give another character's dialogue such as Moe's. For some reason, having the flatfish in a map may rob Starfy of all his pearls.

ID: 07
A small pink creature, which is like a cross between a coral reef and a dolphin. It also looks similar to the used character Ruby, but much smaller. As mentioned in the build date section above, it will enable the debug display that prints a truncated copy of the build date in white on the top-left corner of the screen if the player holds L+R.

A YouTube video of the characters in-game (with animations included), is available here.

Similar to Densetsu no Stafy 3, conversation (かいわ) test messages can be found. However, the texts are different to that game. Some text appears at 0x87DAF7, beginning with a conversation mentioning arrows on clouds (and jumping on them?), similar to the clouds with arrows in Densetsu no Stafy's Sea of Sky stage.

The text also seemingly features "Aqua" (アクア); possibly the witch character Aqua from Densetsu no Stafy who doesn't normally appear in this game and a BGM player.

However, the text appears corrupted if forced with the above method or viewed in Shift-JIS with CrystalTile2, so it has been moved to the notes page.

At offset 63B4B4 in the text table of clothing items (known in The Legendary Starfy as "Stuff"), there is a placeholder "欠番" (missing number) entry in-between Chun Hat and Party Mask. The description of the item, at 63C0D0 is also "欠番".

In Stage 11 Area 6 (the Ogura Castle stage), prior to game completion there is a room where Ogura fights Starfy and is at first invincible. If the player forcefully loads this room (after defeating him) by setting 03007D55 to 02 while in Stage 11, a single Pearl takes the place of Ogura.